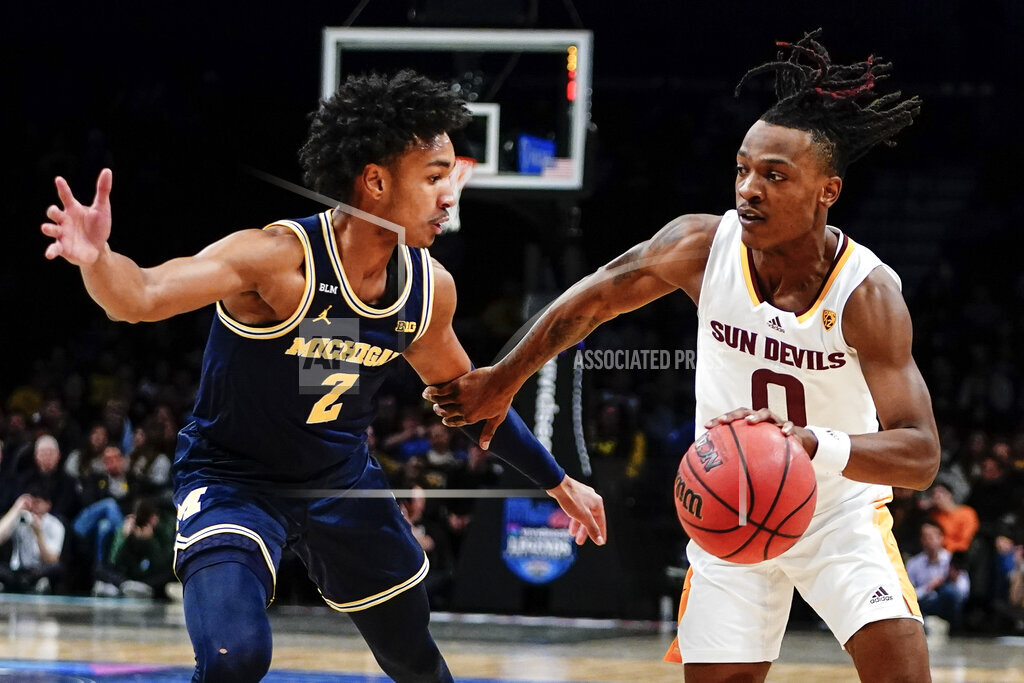 Arizona State 87, (20) Michigan 62 – Arizona State routs No. 20 Michigan to win Legends Classic
Desmond Cambridge Jr. scored 20 points and Arizona State never trailed in blowing out No. 20 Michigan 87-62 to win the Legends Classic at Barclays Center in Brooklyn. DJ Horne added 19 points, Austin Nunez had 15 and Luther Muhammad scored 13 for the Sun Devils, who reached the championship game by overcoming an 11-point deficit in the final nine minutes of a 63-59 victory Wednesday night over VCU. Hunter Dickinson scored 14 points and Jett Howard had 12 for Michigan, which routed Pittsburgh 91-60 on Wednesday but shot just 34% against ASU. It was the most lopsided championship game in the 16-year history of the Legends Classic and Arizona State’s largest margin of victory against a ranked opponent.

Minnesota 68, CMU 60 – Dawson leads Minnesota over Central Michigan 68-60
Dawson Garcia scored 11 of his 17 points in the second half and Minnesota beat Central Michigan 68-60. Ta’lon Cooper added 12 points with eight assists and Braeden Carrington had 11 points for the Golden Gophers, who shot 48%, including 7 of 18 from the arc. Kevin Miller led the Chippewas with 19 points while grabbing seven rebounds. Jesse Zarzuela added 15 points and Reggie Bass 10. Central Michigan shot only 31% and made 6 of 25 from 3-point range.

Clippers 96, Pistons 91 – Clippers rally to beat Pistons 96-91 in Leonard’s return
Reggie Jackson scored 23 points and the Los Angeles Clippers rallied in the fourth quarter to beat the Detroit Pistons 96-91 in Kawhi Leonard’s return to the starting lineup this season. Paul George and Marcus Morris had 16 points each to complete the comeback. Leonard finished with six points, five rebounds and four assists in 24 minutes. Leonard had missed 12 straight games since coming off the bench in two of the first three games of the season. Bojan Bogdanovic led the Pistons with 26 points and Jaden Ivey added 18.

NCAAFB – No. 3 Michigan hosts Illinois, shooting to stay undefeated
No. 3 Michigan hosts Illinois on Saturday in a game that features the top two defenses in the country. The Wolverines, who are 10-0 for the first time since 2006 and boast the nation’s best defense, are aiming to keep their record perfect before the showdown next week at second-ranked Ohio State for the Big Ten East title. Illinois, which has the No.2-rated defense, has lost its past two games against unranked Purdue and Michigan State. The Illini need to win their last two games and hope Purdue loses one to earn the Big Ten West title.

NCAA – UC Board of Regents delays decision on UCLA move to Big Ten
The University of California Board of Regents has scheduled a special meeting for Dec. 14 in Los Angeles to finalize a decision on UCLA’s planned move to the Big Ten Conference. Regents set the date during a meeting in San Francisco, the second public session where the move was debated. UCLA announced on June 30 that it was leaving the Pac-12 for the Big Ten in 2024. USC is also moving to the Big Ten, but it’s a private institution and not part of the UC system.

Titans 27, Packers 17 – Tannehill leads Titans to 27-17 victory over Packers
Ryan Tannehill threw for 333 yards and two touchdowns to outduel Aaron Rodgers as the Tennessee Titans defeated the Green Bay Packers 27-17. Tannehill looked much sharper in his second game back after missing two games with an injured right ankle. He went 22 of 27 and had one interception as the Titans won for the seventh time in eight games. Rodgers went 24 of 39 for 227 yards with two touchdown passes to rookie Christian Watson. Green Bay has lost six of seven.

NFL – NFL shifts Bills’ game vs. Browns to Detroit due to storm
The NFL is relocating the Bills’ home game against the Cleveland Browns to Detroit on Sunday because of a lake-effect snowstorm set to hit the Buffalo region. The move to relocate the game comes before the storm even began. The forecast is for between 1 to 3 feet of snow in the region through the weekend. The switch in sites means the Bills will play back-to-back games in Detroit. They’re scheduled to play the Lions on Thanksgiving.  This will be the third time that Ford Field has hosted a relocated game because of snow.  The Bills also played the Jets in Detroit in the 2014 season.   The Lions home also hosted a Minnesota Vikings game against the New York Giants in 2010 after heavy snow caused the roof of the Metrodome to collapse the morning of the game.

NFL – Lions go for third straight win, seek to slow down Giants
The New York Giants will try to improve to 8-2 and end the Detroit Lions’ two-game winning streak when the teams meet Sunday. The Giants returned from their bye week and beat the Houston Texans 24-16 at home. The Lions are improving under second-year coach Dan Campbell. They are looking for their first three-game winning streak since 2017.

NFL – Rodgers, NFL players urge league to nix turf, go with grass
Aaron Rodgers and his peers around the NFL are calling for teams to tear up their turf playing surfaces and replace them with grass. The outpouring comes a week after NFL Players Association President JC Tretter called on six venues to immediately change their field types, saying the artificial turf in those stadiums was resulting in higher injury rates. Players are concerned about non-contact and lower extremity injuries. The NFL has said its data shows injury rates are similar on grass and artificial turf. Rodgers says owners could be "putting your money where your mouth is if player safety is important.”  One of the fields mentioned is Ford Field in Detroit, which is a dome and grass cannot be grown inside.

Red Wings 7, Sharks 4 – Red Wings beat Sharks 7-4 to snap 4-game losing streak
Moritz Seider scored the tiebreaking goal with 6:06 to play and the Detroit Red Wings overcame a four-point game from Erik Karlsson to beat the San Jose Sharks 7-4. Karlsson rallied San Jose back from a 4-2 deficit in the third period with his third assist and then the tying goal in a span of less than three minutes. But then the NHL’s reigning Rookie of the Year Seider answered 2:23 later when he took a pass from David Perron and beat James Reimer for his first goal of the season. The Red Wings snapped a four-game losing streak.

MLB – Judge wins AL MVP in runaway; Goldschmidt takes NL prize
Aaron Judge of the New York Yankees has won the American League MVP award, and St. Louis Cardinals slugger Paul Goldschmidt took the NL prize. After hitting 62 home runs this season to break the AL record, Judge easily beat out Los Angeles Angels two-way phenom Shohei Ohtani in an MVP race some thought might be close. The 6-foot-7 outfielder received 28 of 30 first-place votes and two seconds for 410 points from a Baseball Writers’ Association of America panel. Ohtani, last year’s winner, was picked first on two ballots and second on the other 28 for 280 points. Goldschmidt won the NL award for the first time after a couple of close calls earlier in his career. Padres third baseman Manny Machado came in second.

MLB – Texas Rangers to host MLB’s 2024 All-Star Game
Baseball Commissioner Rob Manfred announced Thursday that the Texas Rangers will host the 2024 All-Star Game. Manfred announced the game will be held July 16, 2024 at Globe Life Field, which opened during the 2020 pandemic season. The retractable roof stadium hosted the neutral site World Series and NL Championship Series that season. Manfred made the announcement at the conclusion of this week’s owners’ meetings in New York. Next year’s game will take place in Seattle, which last hosted in 2001 in Ichiro’s rookie year and Cal Ripken Jr.’s final season. The 2026 game will take place in Philadelphia to coincide with the 250th anniversary of the founding of the USA.

WNBA – Griner has begun serving sentence in Russian penal colony
WNBA star Brittney Griner has begun serving her nine-year sentence for drug possession at a Russian penal colony. That’s according to statements from her lawyers and agent on Thursday. Her lawyers say they visited her last week at a penal colony in Mordovia, about 350 kilometers (210 miles) east of Moscow. They say, “Brittney is doing as well as could be expected and trying to stay strong as she adapts to a new environment.” The Biden administration has been trying for months to negotiate the release of Griner and another American jailed in Russia, Michigan corporate security executive Paul Whelan.