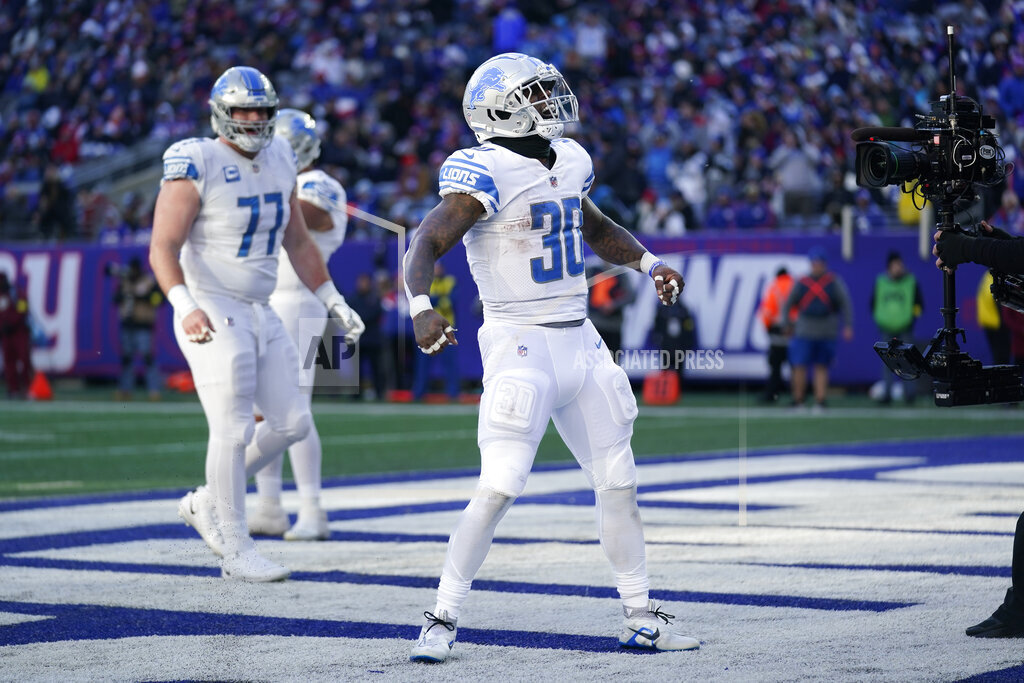 Lions 31, Giants 18 – Williams leads Lions to 3rd straight win, 31-18 over Giants
Jamaal Williams ran for a career-high three touchdowns and the Detroit Lions stunned the New York Giants 31-18. The Lions posted consecutive roads wins and their first three-game winning streak since November 2017. Williams scored on runs of 4, 1 and 1 yards and the Lions’ much-maligned run defense shut down NFL leading rusher Saquon Barkley and forced three turnovers on a cold, blustery afternoon at MetLife Stadium. Defensive end Aidan Hutchinson, the No. 2 overall pick in the draft, intercepted a pass and recovered a fumble to help set up 14 points.

Falcons 27, Bears 24 – Koo’s late 53-yard FG lifts Falcons past Fields, Bears 27-24
Younghoe Koo’s 53-yard field goal gave Atlanta the lead with less than two minutes to play and the Falcons overcame another big game from Chicago’s Justin Fields to beat the Bears 27-24. Fields ran for 85 yards with a touchdown, but the Bears suffered their fourth consecutive loss. Chicago has lost six of seven. The Falcons ran out the clock. Marcus Mariota ran and threw for touchdowns for Atlanta, which pulled within one-half game of NFC South-leading Tampa Bay on the Buccaneers’ bye week. Atlanta running back Cordarrelle Patterson set the NFL record with his ninth career kickoff return for a touchdown.

Eagles 17, Colts 16 – Jalen Hurts’ late TD run gives Eagles 17-16 win over Colts
Jalen Hurts ran for an 8-yard touchdown with 1:20 remaining, and the Philadelphia Eagles rallied past the Indianapolis Colts 17-16. Coming off their first loss of the season, the Eagles trailed 13-3 in the fourth quarter. Hurts threw for a touchdown early in the period to get Philly within three. The third-year quarterback was 18 of 25 with 190 yards through the air and rushed 16 times for 86 yards as the Eagles won their seventh straight road game. Indianapolis never trailed until Hurts’ scoring run. Interim coach Jeff Saturday evened his record at 1-1 since taking over for the fired Frank Reich.

(20) Michigan 70, Ohio 66 – OT – Dickinson, No. 20 Michigan shuck Ohio’s late shot, win in OT
Hunter Dickinson scored 24 points and had 14 rebounds as No. 20 Michigan, startled by a wild buzzer-beater at the end of regulation, beat Ohio 70-66 in overtime. Down 63-61 with 2.1 seconds left in the second half, Ohio threw a length-of-the-court inbounds pass that hit the rim. After a crazy carom and a short miss, Dwight Wilson tossed in a floater to tie it as time expired. As several Wolverines stared in disbelief, the basket stood after a video review and forced overtime. Jett Howard added 13 for the Wolverines, who are 4-1. Wilson had 21 points to lead 3-1 Ohio, while Jaylin Hunter had 14 points and Miles Brown 11.

(23) Michigan 69, Fairfield 53 – No. 23 Michigan women dump Fairfield 69-53
Emily Kiser scored 20 points, Leigha Brown and Laila Phelia each scored 17 and No. 23 Michigan beat Fairfield 69-53 in the Wolverines’ first road game of the season. Phelia scored seven points for Michigan in its 10-2 run to close the first quarter. Following MacKenzie Daleba’s layup for a 13-12 Stags lead, Maddie Nolan and Phelia each made a 3-pointer and Michigan never trailed again. Callie Cavanaugh scored 12 points for Fairfield.

(9) Notre Dame 95, Ball State 60 – Mabrey scores 19 in No. 9 Notre Dame’s win over Ball State
Dara Mabrey scored 19 points, Olivia Miles had 13 points, 11 assists and seven rebounds, and No. 9 Notre Dame beat Ball State 95-60. Notre Dame is 4-0. Ball State is 2-2. The Fighting Irish had six different players score in double figures. Madelyn Bischoff led the Cardinals with 15 points. Ball State led 11-6 halfway through the first quarter but the Irish closed out the period with a 21-7 run. Notre Dame was up 54-27 at the half and maintained at least a 25-point lead the rest of the way.

NCAAFB – Ohio State, Michigan to meet with much at stake
One of the greatest rivalries in sports seems set up for another classic. No. 2 Ohio State and No. 3 Michigan will both be ranked in the top five of the AP poll for the 12th time when they meet Saturday at the Horseshoe in what’s known as The Game. The winner will earn a trip to the Big Ten championship game and a probable spot in the College Football Playoff. The Wolverines are coming off a rare win in the series. Until Jim Harbaugh finally beat the Buckyes last year at home, they had won a school-record eight straight and 15 of 16 against Michigan.

NCAAFB – AP Top 25: USC moves into top 5 for 1st time in 5 years
Southern California moved into the top five of The Associated Press college football poll for the first time in five years. Georgia received 62 of the 63 first-place votes in the AP Top 25 as the top four teams held their places after playing varying degrees of close games Saturday. No. 2 Ohio State received the other first-place vote. Michigan was No. 3 again, followed by TCU. The Trojans edged up two spots after a thrilling victory against rival UCLA. The last time USC was ranked in the top five was September of 2017, when it started at No. 4 but spent most of the season ranked in the teens before finishing at 12th.

Kings 137, Pistons 129 – Kings beat Pistons 137-129, extend winning streak to 6 games
De’Aaron Fox had 33 points and seven assists and the Sacramento Kings extended their winning streak to six games with a 137-129 win over the Detroit Pistons. Fox scored 10 points in the fourth quarter, including a pair of free throws with 22.6 seconds remaining that extended Sacramento’s lead to six points. The Kings have won eight of their last 10 games after starting the season 0-4. Pistons rookie Jaden Ivey, the fifth overall pick in the 2022 NBA draft, had 24 points. Bojan Bogdanovic added 21 points for Detriot, which has lost seven consecutive games and 10 of its last 11.

Penguins 6, Blackhawks 3 – Crosby, Malkin score as Penguins beat Blackhawks 5-3
Sidney Crosby had a goal and three assists, and the Pittsburgh Penguins topped the Chicago Blackhawks 5-3 for their third straight win. Evgeni Malkin scored in his 1,000th NHL game, helping Pittsburgh close out a 3-0 road trip. Rickard Rakell had a goal and an assist, and Brock McGinn also scored for the Penguins. Pittsburgh had a 3-2 lead before Phillipp Kurashev tied it for Chicago with a third-period shot from the corner behind the goal. But Crosby responded for the Penguins with 3:14 left, scoring his 10th of the season on a nice move in front.

Ecuador 2, Qatar 0 – World Cup dismay for Qatar as Ecuador wins opening game
Qatar’s first ever World Cup match ended in dismay for an overmatched team and with a place in unwanted soccer history. The controversy-laced tournament opened with Qatar getting outplayed in a 2-0 loss to Ecuador in front of 67,372 fans at Al Bayt Stadium. A host team had never lost its opening game in 92 years of soccer’s biggest event. The first World Cup in the Middle East is a chance for Qatar to showcase itself to the wider world but its soccer team couldn’t live up to the moment. Ecuador captain Enner Valencia scored both of his team’s goals in the first half.

FIFA – US returns to World Cup against Wales after 8-year wait
Gio Reyna, Joe Scally and Yusuf Musah were 11 years old the last time the United States took the field in a World Cup match. On the 3,066th day after that loss in Brazil, the Americans return to soccer’s showcase with a new-look team dreaming lofty goals. Filled with novelty, nerves and naivety, the U.S. takes the field against Wales on Monday night. A Friday match against England follows and group play ends Nov. 29 against Iran.

FIFA – Biden urges US World Cup team to `let’s go shock ’em all’
President Joe Biden telephoned the American World Cup team ahead of their opening match against Wales. He said “let’s go shock ’em all.” Biden called the team at about 11:30 p.m. Friday. Biden told the players “I know you’re the underdog.” The United States is back in the World Cup after missing the 2018 tournament. The teams opens against Wales on Monday, then meets England on Friday and closes group play against Iran on Nov. 29.

FIFA – McKennie readies for World Cup with red, white & blue hair
Weston McKennie got into the patriotic spirit, dying his hair red, white and blue ahead of the United States’ World Cup opener against Wales. The 24-year-old midfielder from Fort Lewis, Washington, showed up with the new colors for the last training session before Monday’s match. McKennie, who plays for Juventus in Italy, previously had a streak of blond in his hair. The Americans open the World Cup on Monday night after failing to reach the 2018 tournament.

FIFA – Qatar riot police push back crowds at World Cup fan zone
The fan zone set up in central Doha has turned into a chaotic scene on the opening day of the World Cup as tens of thousands of fans are pushing and shoving against police lines to enter the venue. Fans were trying to enter the enclosed area that contains a big-screen television for viewing matches, places to buy beer, and little else. Riot police armed with batons and shields stood guard at the entrance. Some fans pleaded with officers to let them through the line. Only a trickle of pregnant women and handicapped fans were allowed to enter the fan zone through a special priority entrance shortly after the opening match between Qatar and Ecuador kicked off in another Qatari city, Al Khor.

FIFA – World Cup Viewer’s Guide: Qatar loses opener, US up on Day 2
The first World Cup in the Middle East finally began Sunday night with a flashy opening ceremony and a loss by host Qatar against Ecuador. Two of the best players in the world were ruled out of the tournament with injuries before it even began. France striker Karim Benzema is out after hurting his left thigh and Senegal forward Sadio Mane has a leg injury. Monday’s matches consist of the United States against Wales, England versus Iran and the Netherlands facing Senegal. Eight of the 13 team captains of European nations have planned to wear “One Love” armbands promoting inclusivity but they could face penalties for breaking rules regarding FIFA-issued uniforms.