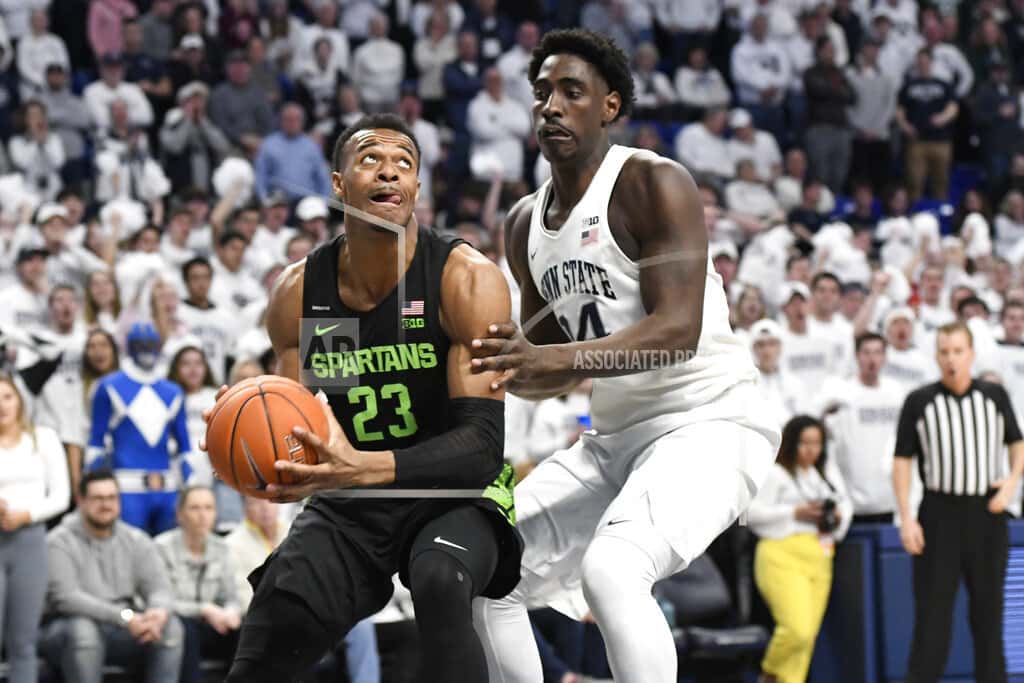 (16) MSU 79, (20) Penn St. 71 – Spartans beat Nittany Lions, catch Terrapins
Michigan State has pulled into a first-place tie with Maryland in the Big Ten. The 16th-ranked Spartans are 13-6 in the conference after turning a 19-point, first-half deficit into a 78-71 victory at No. 20 Penn State. Xavier Tillman Sr. scored 23 points and had 15 rebounds for Michigan State, which trailed 46-31 at intermission before scoring the first nine points of the second. Rocket Watts added 18 points, Cassius Winston had 14 and Aaron Henry chipped in 12 for the Spartans.

NCAA – An NCAA Tournament with empty arenas? It can’t be ruled out
The NCAA is ruling out no contingencies when it comes to coronavirus and the NCAA Tournament.  In an interview with Bloomberg News, Chief Operating Officer Donald Remy did not dismiss the possibility of games being played with no fans in arenas. The games presumably would still be televised.  The NCAA declined further comment to the AP on the possibility of no fans in the stands. Also, the NCAA announced it has established a coronavirus advisory panel of medical, public health and epidemiology experts and NCAA schools.

Blackhawks 6, Ducks 2 – Chicago scores on 3 consecutive shots, beats Ducks 6-2
Dylan Strome, Alex Nylander and Patrick Kane scored on consecutive shots late in the second period, leading the Chicago Blackhawks to a 6-2 victory over the Anaheim Ducks. Strome scored twice and added an assist in the rout. Chicago won its third straight game while chasing a wild-card playoff spot in the Western Conference. Drake Caggiula and David Kampf also scored for the Blackhawks. Danton Heinen and Carter Rowney scored for Anaheim, which lost for the sixth time in eight games.

MLB – Bryant ruling: Cubs did nothing ‘nefarious’
Arbitrator Mark Irvings accepted Chicago Cubs president of baseball operations Theo Epstein’s rationale for delaying Kris Bryant’s debut at the start of the 2015 season. Irvings concluded there was no proof of "a nefarious motive" by Epstein to delay the third baseman’s eligibility for free agency. In a 42-page decision obtained by The Associated Press, Irvings accepted Epstein’s explanation that injuries to Mike Olt and Tommy La Stella prompted the timing of Bryant’s call-up to the Cubs in April 2015. Had Bryant been brought up one day earlier, he would have been eligible for free agency after the 2020 season.

MLB – White Sox think CF Robert is headed for stardom
Luis Robert has the type of athleticism that stands out in any crowd. The chiseled Robert, listed at 6-foot-3 and 185 pounds, is a major reason why the Chicago White Sox are talking playoffs this year despite a streak of seven consecutive losing seasons. The center fielder batted .328 with 32 homers, 92 RBIs and 36 steals over three minor league stops last season. He appears on track to make his major league debut on opening day.

Olympics – Japan Olympic minister says games could be held any time in 2020
Japan’s Olympic minister says the contract to hold the Tokyo Games only specifies the event has to be held during 2020.  Seiko Hashimoto’s response to a question in the upper house of parliament implies the Olympics could be held later in the year and would not have to start on July 24 as planned.  The issue of a delay follows the fast-spreading virus that has been blamed for 12 deaths in Japan and has shut down most schools, sports competitions and Olympic-related events in the country. The virus that started in China has been detected in at least 70 countries, with 90,000 cases and 3,100 deaths reported.  IOC officials and Tokyo organizers have repeatedly said they expect the Olympics to open on schedule.