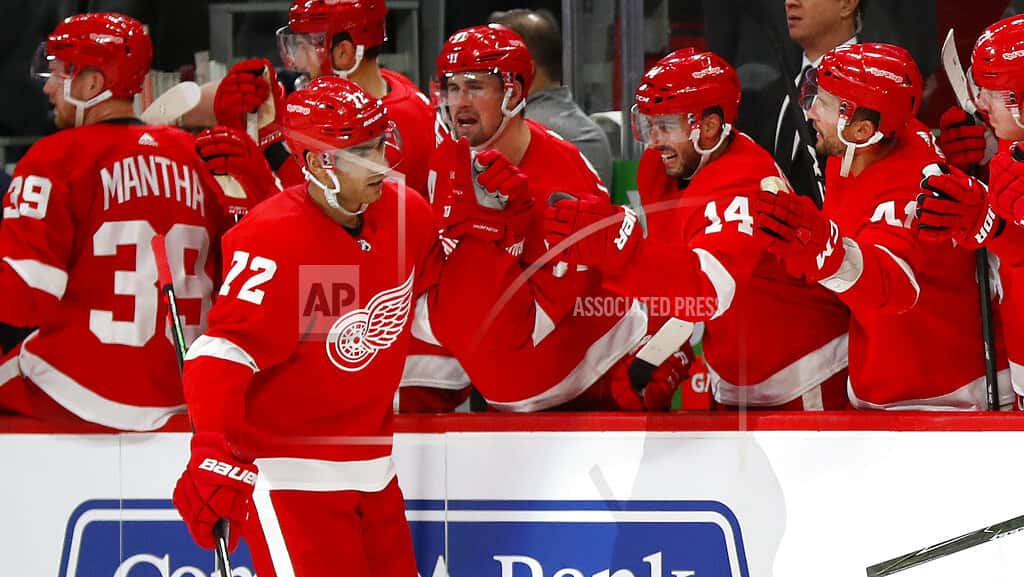 Red Wings 4, Canadiens 3 – NHL-worst Red Wings beat Canadeins 4-3, sweep season series
Andreas Athanasiou scored his second goal with 5:15 remaining in regulation to cap Detroit’s three-goal third period and the Red Wings rallied to beat the Montreal Canadiens 4-3. Detroit swept the season series against the Canadiens, earning four of its NHL-low 15 victories against them. Red Wings goalie Jonathan Bernier did not give up a goal in the third period and finished with 19 saves. Nate Thompson and Jeff Petry scored to give Montreal a 2-0 lead in the first period and Nick Suzuki’s goal put it ahead 3-1 after two periods.

NBA – Pistons and guard Reggie Jackson agree on contract buyout
The Detroit Pistons and Reggie Jackson agreed on a contract buyout, paving the way for the veteran guard to sign with another team. Detroit announced the agreement Tuesday. Jackson is in the final season of a five-year, $80 million deal he signed in 2015 with the Pistons. The 29-year-old Jackson is averaging 14.9 points and 5.1 assists this season, but he has been limited to just 14 games this season due to a back injury. Oklahoma City drafted the former Boston College star with the 24th pick overall in 2011. He has averaged 12.9 points over his career.

NBA – Reports: Cavaliers, Beilein splitting after just 54 games
Cavaliers first-year coach John Beilein is stepping down after 54 games, according to multiple reports. ESPN reported that Beilein is expected to say goodbye to staff and players Wednesday when they return from the All-Star break. The Cavs have the NBA’s second-worst record at 14-40. The 67-year-old Beilein has struggled in his transition to the pro game after 12 successful seasons at Michigan. He signed a five-year contract in May with Cleveland. Associate head coach J.B. Bickerstaff is expected to take Beilein’s spot on an interim basis. Bickerstaff previously coached in Memphis and Houston.

NCAAFB – Report: Michigan State investigating allegations of NCAA violations
Michigan State is reportedly investigating allegations of NCAA violations made by a former football staffer in a lawsuit. Curtis Blackwell, a former Michigan State football employee, filed a lawsuit claiming his employment agreement was violated when he was disciplined while the school addressed sexual assault allegations against players in 2017. A recent filing in that case from Blackwell’s lawyer suggested that deposition testimony by then-coach Mark Dantonio may have revealed NCAA violations. Dantonio announced his retirement earlier this month. Athletic director Bill Beekman said then that it was his understanding that the allegations were false. But an athletic department spokesman told The Detroit News on Tuesday that the school is looking into them.

NCAA – NCAA moves toward immediate eligibility for all transfers
The NCAA is moving toward allowing all Division I athletes to transfer one time without sitting out a season of competition. A plan to change the waiver process is expected to be presented to the Division I Council in April. If adopted, new criteria would go into effect for the 2020-21 academic year. Currently, football, men’s and women’s basketball, men’s hockey and baseball players must sit out one season after transferring. The NCAA adjusted waiver criteria two years ago to give more athletes the chance to become immediately eligible, but that has led to complaints about inconsistency in the process. If the plan is adopted, any athlete in good academic standing and not facing a disciplinary suspension will be allowed to transfer and play immediately for the new school.

NASCAR – Newman communicating following Daytona crash
NASCAR driver Ryan Newman is awake and speaking with family and doctors a day after his horrific crash on the final lap of the Daytona 500.  Roush Fenway Racing released an update on its driver about 20 hours after Newman’s car slammed into the wall at nearly 200 mph, flipped, got T-boned by another car, flipped several more times and skidded to a halt in flames. Everyone watching feared the worst Monday night and had to wait nearly two hours to learn that Newman’s injuries were not considered life-threatening.

MLB – Manfred apologizes for calling WS trophy a ‘piece of metal’
MLB Commissioner Rob Manfred has apologized for what he called a disrespectful reference to the World Series trophy as a “piece of metal.” Even before being asked about it at the Cactus League media day, Manfred said he made a mistake with those comments when trying to deliver a rhetorical point in an interview two days earlier. Players became infuriated by his “piece of metal” comment during a lengthy interview with ESPN on Sunday, the same day he spoke in Florida.