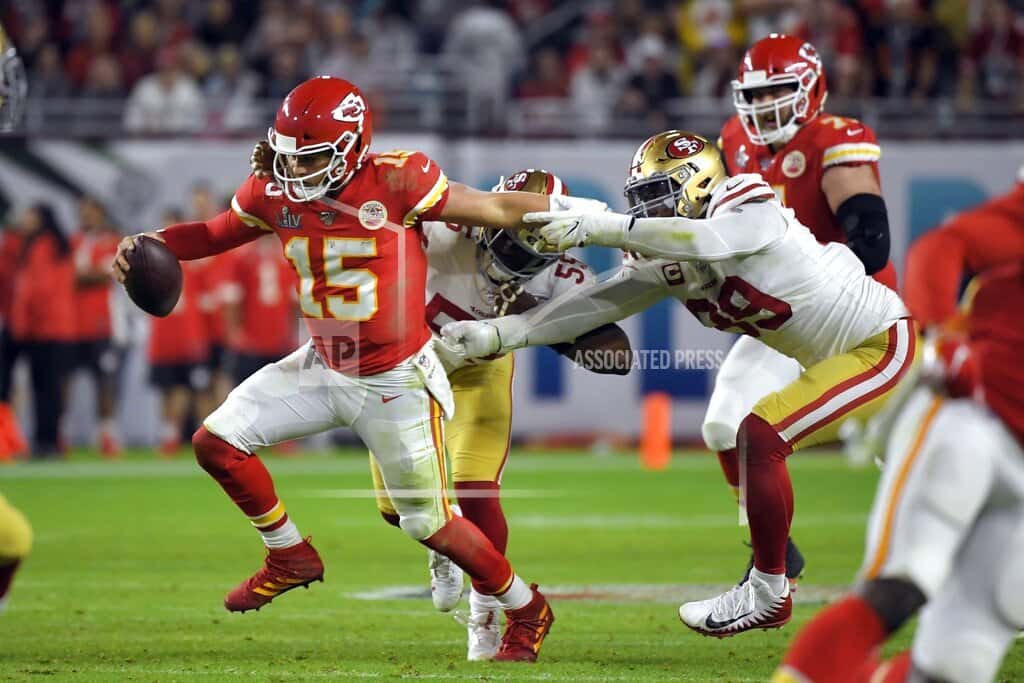 Chiefs 31, 49ers 20 – Mahomes leads Chiefs’ rally past 49ers in Super Bowl, 31-20
Patrick Mahomes led the Kansas City Chiefs to three touchdowns in the final 6:13, and they overcame a double-digit deficit for the third postseason game in a row to beat the San Francisco 49ers 31-20 in the Super Bowl. The Chiefs trailed 20-10 and faced a third and 15 when Mahomes threw to Tyreek Hill for 44 yards. They scored a touchdown four plays later, and quickly forced a punt. Mahomes then hit Sammy Watkins for 38 yards to set up a 5-yard scoring reception by Damien Williams that put Kansas City ahead to stay with 2:44 to go.

NFL – Super Bowl LIV – Mahomes named MVP with 4th quarter comeback
Chiefs quarterback Patrick Mahomes was named the MVP of Super Bowl 54 after shaking off a pair of interceptions to lead their comeback win. Mahomes struggled with his accuracy for 3 ½ quarters before finishing 26 of 42 for 286 yards and two touchdowns. He also ran for a first-quarter touchdown as Kansas City won the championship game for the second time in three appearances.

NFL – Super Bowl LIV – Shanahan suffers another Super Bowl collapse
Kyle Shanahan will now have another Super Bowl collapse to answer questions about. After being peppered all week by reporters seeking to rehash that blown 28-3 lead to New England three years ago when Shanahan was offensive coordinator in Atlanta, Shanahan’s first trip to the Super Bowl as a head coach ended in another late-game meltdown. The 49ers became the third team in Super Bowl history to blow a 10-point lead in the second half when they blew a 20-10 advantage and lost 31-20 to the Kansas City Chiefs.

Pistons 128, Nuggets 123 – OT – Pistons rally to beat Nuggets 128-123 in OT, snap skid
Andre Drummond had 21 points and 17 rebounds, and the Detroit Pistons rallied from an early 21-point deficit to beat the Denver Nuggets 128-123 in overtime, snapping their five-game losing streak. Reggie Jackson added 20 points and Bruce Brown scored 19 for Detroit. Drummond fouled out with 2:43 left in overtime. Nikola Jokic had 39 points, 11 assists and 10 rebounds for Denver. His 3-pointer with 29.4 seconds left made it 126-123, but Thon Maker answered with an alley-oop dunk at the other end to push the lead to five.

Raptors 129, Bulls 102 – Raptors tie team record with 11th straight win, beat Bulls
Terence Davis scored a career-high 31 points, Pascal Siakam had 17, and the Toronto Raptors beat the Chicago Bulls 129-102, matching the longest winning streak in franchise history with their 11th consecutive victory. Serge Ibaka scored 16 points, Chris Boucher had 15 and Kyle Lowry 14 as the Raptors outscored the Bulls 69-39 in the second half to win their 12th consecutive meeting with Chicago. Toronto also won 11 straight from Jan. 6 to Jan. 30, 2016, and again from Feb. 26 to Mar. 16, 2018.

Michigan 78, (18) Iowa 63 – Hillmon has career-high 30, Michigan women beat No. 18 Iowa
Naz Hillmon scored a career-high 30 points and pulled down 10 rebounds to lead the Michigan women to a 78-63 win over No. 18 Iowa. Hillmon shot 14 of 19 from the floor and collected her seventh double-double this season. The Wolverines got their first win over a ranked opponent this season after four losses and their first victory over a Top 25 team since beating Iowa on Feb. 1 last year in Ann Arbor. Alexis Sevillian led Iowa with 15 points.

Tennis – Djokovic wins 8th Australian title
Novak Djokovic has won a record-extending eighth Australian Open championship, beating Dominic Thiem 6-4, 4-6, 2-6, 6-3, 6-4. No other man in the history of tennis has won this tournament more than six times. It’s the 17th Grand Slam title for Djokovic, who has five titles from Wimbledon, three from the U.S. Open and one from the French Open. Only Roger Federer’s 20 and Rafael Nadal’s 19 top Djokovic’s Grand Slam count. Djokovic’s victory means he will return to No. 1 in the rankings, replacing Nadal. Thiem is 0-for-3 in Grand Slam finals.

Golf – PGA – Simpson rallies to win Phoenix Open
Webb Simpson rallied late in regulation to beat Tony Finau and capture the PGA’s Waste Management Phoenix Open. Simpson birdied the final two holes of regulation to force a playoff before sinking a 10-foot birdie putt on the first extra hole to win it. Finau missed an 18-foot birdie try in the playoff.  Simpson closed with a 2-under 69 for a 17 under total.

Golf – PGA – PGA Tour remembers Kobe Bryant with 16th-hole pin position
The PGA Tour joined players with a 16th-hole tribute to Kobe Bryant on Sunday at the Waste Management Phoenix Open, using his two Lakers uniform numbers to cut the final-round pin position on the stadium par 3. The pin was placed 24 yards from the front edge and 8 yards from the left edge, putting it in the back left corner of the green on the rowdy hole that holds more than 20,000 fans.