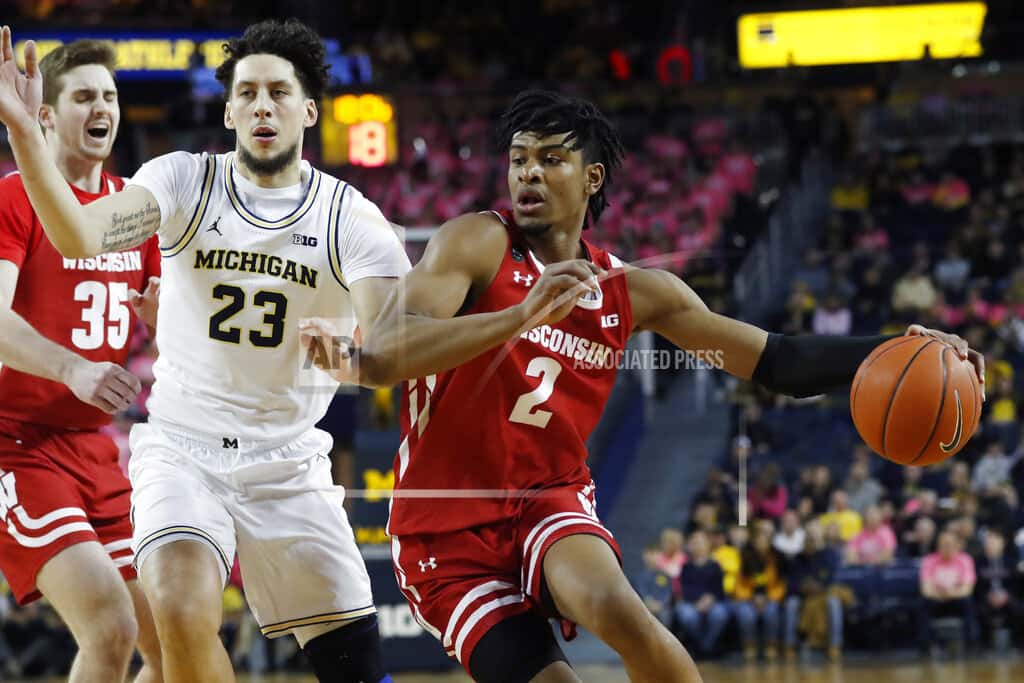 Wisconsin 81, (19) Michigan 74 – Trice, Wisconsin hold off No. 19 Michigan 81-74
D’Mitrik Trice scored 28 points and Wisconsin snapped No. 19 Michigan’s winning streak at five with an 81-74 victory over the Wolverines. The Badgers extended their own winning streak to five, never trailing in the game and repelling every Michigan push in the second half. The Wolverines cut a 14-point deficit to three, but after a Wisconsin timeout with 2:50 remaining, Trice sank a 3-pointer to double the lead. Zavier Simpson scored a career-high 32 points for the Wolverines, who were without guard Eli Brooks because of a broken nose.

Pacers 106, Blazers 100 – Sabonis scores 20 points, Pacers beat Trail Blazers, 106-100
Domantas Sabonis had 20 points and 11 rebounds to lead the Indiana Pacers to a 106-100 victory over the Portland Trail Blazers. Malcolm Brogdon had 17 points, eight assists and six rebounds while T.J. Warren and Victor Oladipo scored 15 points each for the Pacers, who have lost four of the last five games. CJ McCollum had 28 points and eight assists, Gary Trent Jr. had 20 points and five rebounds, and Hassan Whiteside had 18 points and 16 rebounds for the Trail Blazers, (26-34), who have lost five of six games.

Blackhawks 5, Lightning 2 – Kubalik records hat trick, Chicago rallies past Tampa Bay
Dominik Kubalik recorded a hat trick with three goals in the third period, and the Chicago Blackhawks rallied past the Tampa Bay Lightning 5-2. Slater Koekkoek scored his first goal of the season and Brandon Saad added another score as Chicago beat the Lightning for the first time in regulation since Dec. 13, 2009. Chicago’s Corey Crawford finished with 37 saves. Nikita Kucherov and Brayden Point each had a goal and an assist for Tampa Bay, which lost its fourth consecutive game. Curtis McElhinney stopped 22 shots.

Wild 7, Red Wings 1 – Dumba’s 2 goals, assist lead Wild to 7-1 win over Red Wings
Defenseman Matt Dumba had two goals and an assist and the Minnesota Wild beat the Detroit Red Wings 7-1. Kevin Fiala had a goal and two assists and Ryan Hartman and Ryan Donato added a goal and an assist each for the Wild. Red Wings goalie Jimmy Howard is 0-18-2 since his last win on Oct. 29. He allowed five goals before being pulled a little more than midway through the second period. It was the fifth time he has been pulled this season. He has allowed nine goals on 33 shots in his last two games.

MLB – Cubs reliever Brad Wieck has surgery for heart flutter
Chicago Cubs reliever Brad Wieck had surgery this week for an abnormal heart flutter and is out indefinitely.  The team says an irregular heartbeat was discovered during the 28-year-old left-hander’s spring training physical. Subsequent tests showed an intermittent atrial flutter.  Wieck underwent a cardiac ablation at Northwestern Memorial Hospital in Chicago on Monday and returned to Arizona two days later. Wieck had a 5.71 ERA over 44 appearances for San Diego and Chicago last season. He had a 3.60 ERA in 14 games with the Cubs.

Olympics – Atlanta’s Olympic cauldron to be relit for marathon trial
The Olympic cauldron used in the 1996 Games in Atlanta is scheduled to be publicly lit again for the first time in over two decades on Saturday. News outlets report Georgia State University announced the cauldron will be lit just before noon for the Olympic marathon trial. The course weaves through some of Atlanta’s most historic neighborhoods. The race is expected to determine who will represent the United States in the upcoming Summer Olympics in Tokyo. The cauldron was lit by boxing great Muhammad Ali during the opening ceremonies in 1996. It will be reignited Saturday by Georgia State University Athletics Director Charlie Cobb.