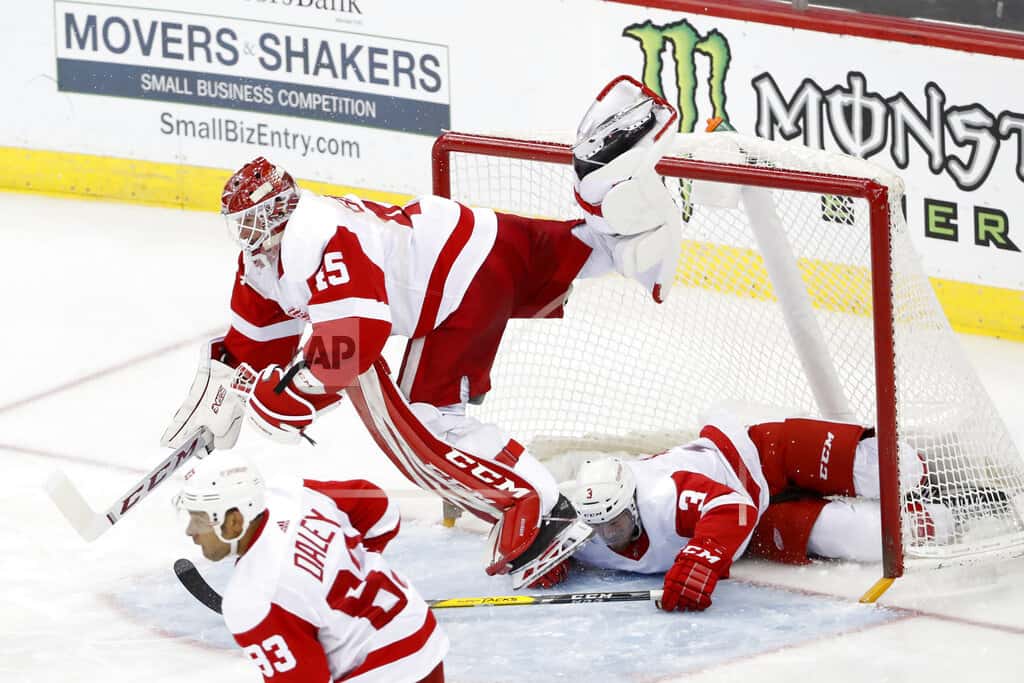 Devils 4, Red Wings 1 – Blackwood, Simmonds lead Devils in 4-1 win over Red Wings
The New Jersey Devils scored four times in the third period to beat the Detroit Red Wings 4-1. Wayne Simmonds scored twice in big period. Andy Greene and Jesper Bratt also scored in the four-minute barrage as the Devils posted only their third win (3-20-0) when trailing after two periods. Goaltender Mackenzie Blackwood, who had shutout in his last two starts, made 25 saves in winning for the fourth time in five games (4-0-1). Andreas Athanasiou scored for Detroit. Bernier finished with 22 saves for Detroit.

NCAAMBB – NCAA finds serious infractions committed by Gamecocks
South Carolina has become the latest school to receive an NCAA notice of allegations over the federal probe into college basketball. Athletic director Ray Tanner says the school received the notice about a violation alleged to have been committed by former assistant coach Lamont Evans, who worked for coach Frank Martin for four seasons from 2015-16. The NCAA has categorized the infraction as Level I, the most serious of its violations and what it calls a “severe breach of conduct." Evans moved on to Oklahoma State and has admitted to accepting $22,000 in bribes as a college assistant to connect players with runner Christian Dawkins and others hoping to represent them after college. Evans was sentenced this past June to three months in prison.

(19) Northwestern 66, Michigan 60 – Burton, Wood help No. 19 Northwestern women edge Michigan
Veronica Burton hit a tie-breaking 3-pointer with 2:35 to play, Sydney Wood drained the clinching free throws with 8.1 seconds left and No. 19 Northwestern edged Michigan 66-60. Both teams struggled in the fourth quarter, Northwestern was 3-of-12 shooting and Michigan 3 of 13. It was tied at 60 before Burton’s big shots. Both teams had several empty possessions before Wood clinched it from the foul line and Burton added a free throw with a second left.Wood and Abi Scheid scored 14 points apiece and Burton and Abbie Wolf added 13 each for Northwestern. Akienreh Johnson led the Wolverines with 15.

MLB – Astros’ Bregman, Altuve apologize for sign-stealing scheme
Houston Astros infielders Alex Bregman and José Altuve (al-TOO’-vay) have apologized on behalf of the ballclub for its sign-stealing scheme that was investigated and punished by Major League Baseball.  Bregman said at a news conference Thursday that he is “really sorry.” Altuve said there was a full team meeting Wednesday to discuss what happened.  Astros owner Jim Crane raised eyebrows when he said: “Our opinion is that this didn’t impact the game. We had a good team. We won the World Series. And we’ll leave it at that.”  MLB didn’t punish any players for the cheating and Crane said the team wouldn’t, either. However, former Houston outfielder Carlos Beltran was forced out of his new job as manager of the Mets following his role in the sign-stealing process.  Commissioner Rob Manfred disciplined the Astros after he found the team broke rules by using electronics to steal signs during its run to the 2017 championship and again in the 2018 season.

MLB – White Sox’s Lopez focuses on matching Giolito’s turnaround
Chicago White Sox pitcher Lucas Giolito changed his mental approach last season and credited that with turning him into an All-Star. Teammate Reynaldo Lopez saw that strategy, put it into use and is hoping for similar results as the White Sox look to go back to the postseason for the first time since 2008.

NCAAFB – 2 Ohio State football players plead not guilty to rape
Two former Ohio State football players have pleaded not guilty to holding a woman against her will and raping her. Defensive backs Amir Riep and Jahsen Wint made an initial appearance Thursday in Franklin County Municipal Court in Columbus. Their attorneys entered the pleas on their behalf. Both were kicked off the team Wednesday after they were charged. The accuser told police that on Feb. 4 she was having consensual sex with Riep before Wint came into the room and both forced her into sex. Riep is a cornerback entering his senior season. Wint is a redshirt senior who would have been in the mix at safety.

NASCAR – Trump to attend Daytona 500
A White House spokesman has confirmed that President Donald Trump will attend NASCAR’s season-opening Daytona 500. He is scheduled to spend part of the Presidents Day weekend at his private club in Palm Beach, Florida. The President will serve as grand marshal and give the command for drivers to start their engines. He’s the first sitting president since George W. Bush in 2004 to attend the race.  The Federal Aviation Administration issued a flight restriction for Sunday. The U.S. Secret Service also tweeted to fans that drones are prohibited within 30 miles of the race in Daytona Beach, a restriction put in place for presidential visits.

PGA – Kuchar leads at Riviera
Matt Kuchar is the leader through one round of the Genesis Invitational at Riviera Country Club in Los Angeles.  Kuchar birdied his first two holes and never let up until in a 7-under 64 that gave him a three-stroke lead.  Russell Henley, Wyndham Clark, Kyoung-Hoon Lee, Harold Varner III and Adam Schenk are tied for second at 4 under.  Rory McIlroy, Patrick Cantlay, Jason Day and Bryson DeChambeau are in the mix at 3 under.  Tiger Woods eagled his first hole and added two birdies on his opening front nine, but he closed with a bogey to fall to 2 under.

Olympics – Tokyo, IOC officials reiterate that the Olympics are on
Tokyo Olympic organizers are reiterating that the 2020 Games will not be waylaid by the virus spreading from neighboring China.  Organizing committee president Yoshiro Mori says he wants to make it clear again that "we are not considering a cancellation or postponement of the games."  The coronavirus has wiped out track meets, golf tournaments, soccer matches and almost all sports in China. It is also keeping Chinese athletes from traveling to qualify.