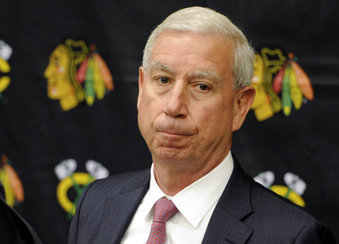 A day after his surprise firing, former Blackhawks president John McDonough called his time with the team “the ride of a lifetime.” McDonough went on to praise owner Rocky Wirtz and his family in a statement released by the team one day after he was dismissed in a surprise move.

The Chicago Bears signed defensive tackle John Jenkins. Jenkins appeared in 16 games and made five starts for Miami last season, getting one sack. He has also played for New Orleans, Seattle, Chicago and the New York Giants since he entered the league in 2013.

The governor of North Carolina says NASCAR can hold the Coca-Cola 600 without fans at Charlotte Motor Speedway at the end of May if health conditions do not deteriorate in the state. Gov. Roy Cooper and state public health officials believe the race can go forward on Memorial Day weekend.

The NCAA is moving forward with a plan to allow college athletes to earn money for endorsements and a host of other activities involving personal appearances and social media. The NCAA Board of Governors gave its support to a plan that permits athletes to cash in on their names, images and likenesses as never before and without involvement from the association, schools or conferences. Proposed rule changes still must be voted on by NCAA membership at the convention in January. The NCAA said it will still seek help from Congress to keep individual states from passing their own laws on compensation for college athletes.

The 2021 NFL draft will be held in Cleveland from April 29 to May 1. The dates were announced following the completion of a unique, stay-at-home draft that went smoothly despite logistical obstacles due to the COVID-19 pandemic. TV ratings soared over the weekend as fans soaked in every moment. The NFL officially awarded Cleveland the 2021 NFL draft last year. The Browns will be celebrating their 75th anniversary next year. Details are still being finalized, but the draft will be held at locations around FirstEnergy Stadium and the Rock & Roll Hall of Fame.