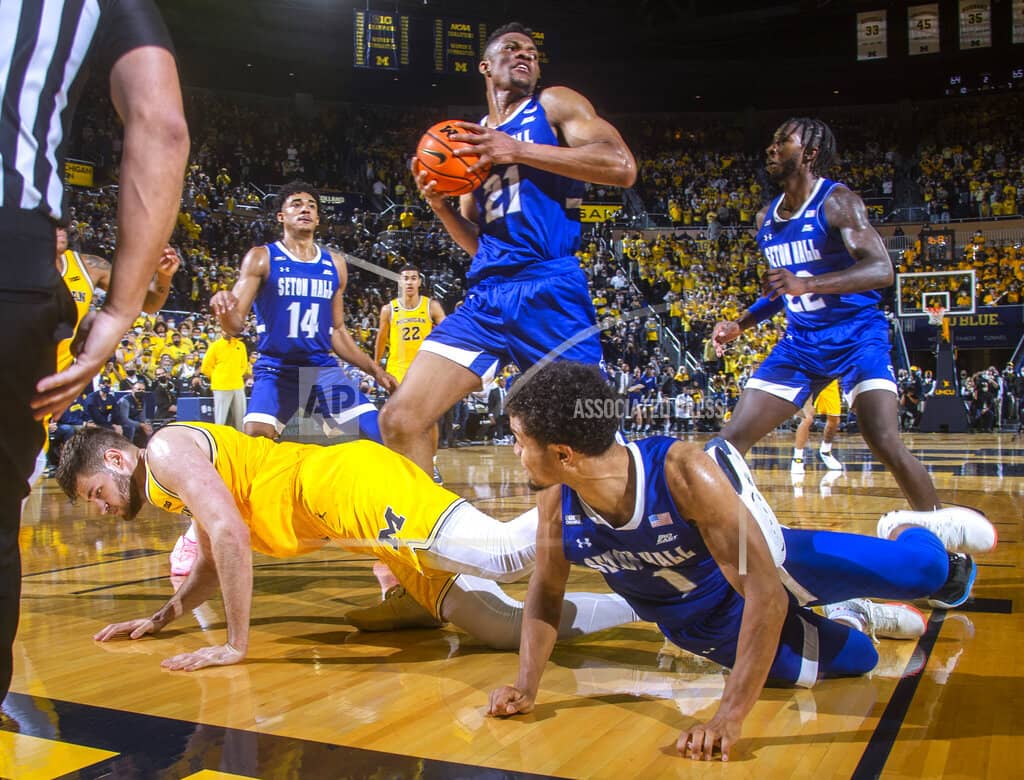 Seton Hall 67 #4 Michigan 65 – Seton Hall stuns No. 4 Michigan 67-65, making key FTs late
Jared Rhoden scored 16 points, helping Seton Hall rally to beat No. 4 Michigan 67-65. The Wolverines had a chance to extend the game with 0.8 seconds left, but Terrance Williams missed the first of two free throws. Unlike the 1989 national championship game in which Rumeal Robinson made free throws to seal a victory for Michigan over Seton Hall, the maize and blue didn’t follow the same scrip. The Pirates trailed by 11 points early in the second half and took the lead with 1:15 left for the first time since the first half.

NCAAMBKB – Michigan hoops coach Juwan Howard agrees to 5-year extension
Michigan basketball coach Juwan Howard and the school have agreed to a five-year extension that keeps him under contract through the 2025-26 season. The announcement was made by athletic director Warde Manuel on Tuesday night, a couple hours before the reigning Associated Press coach of the year led the fourth-ranked Wolverines against Seton Hall. Manuel hired Howard in May of 2019, giving the Miami Heat assistant and member of Michigan’s Fab Five a chance to be a head coach. Howard replaced John Beilein when he bolted to coach the Cleveland Cavaliers.

Stars 5, Red Wings 2 – Robertson, callup Oettinger lead Stars past Red Wings 5-2
Jason Robertson scored twice and Jake Oettinger made 28 saves in his season debut as the Dallas Stars beat the Detroit Red Wings 5-2 on Tuesday night. Ryan Suter, Jamie Benn and Roope Hintz also scored for the Stars. Filip Zadina and Dylan Larkin scored for the Red Wings. Alex Nedeljkovic stopped 25 shots as his three-game winning streak was snapped. Larkin was removed from the game before the start of the third period due to COVID-19 protocol.

NCAAFB – CFP top 4 unchanged: Georgia, Alabama, Oregon and Ohio State
Georgia, Alabama, Oregon and Ohio State held their places in the College Football Playoff ranking, with Cincinnati still sitting at fifth. There was no movement in the top seven after all those teams won last week. Michigan was still No. 6 and Michigan State at seventh, heading into the Spartans’ big game Saturday at Ohio State. Notre Dame moved up a spot to eighth. Oklahoma State is now the highest ranked Big 12 team at nine after Oklahoma was handed its first loss last week. Wake Forest is No. 10, the highest ranked team from the Atlantic Coast Conference.

NCAAFB – Big Ten in A1 position for CFP berth, or even being shut out
With two weeks left in the regular season, the Big Ten has positioned itself to get a third straight berth in the College Football Playoff, and possibly two if an avalanche of things go the right way. No. 5 Ohio State, No. 7 Michigan State and No. 8 Michigan all have 9-1 records and are in position to get the league a third straight spot in the playoff. There’s also a chance the Big Ten can get shut out, as it did in 2017 and ’18. That happens if the West winner, No. 19 Wisconsin leads, captures the conference title game.

MLB – Tigers officially add LHP Eduardo Rodríguez to boost rebuild
The Detroit Tigers plan to be relatively aggressive in free agency and they proved that while giving their rebuild a boost, adding left-hander Eduardo Rodriguez to their rotation with a $77 million investment. The team announced Tuesday that it agreed to terms on a five-year contract with Rodríguez. The 28-year-old Rodríguez joins a pitching staff with Casey Mize and Tarik Skubal on a third-place team that finished with 77 wins for its best season in five years. The Tigers know they have a lot of catching up to do after trailing the AL Central champion Chicago White Sox by 16 games.

MLB – Guardians MLB team settles lawsuit with roller derby club
The Cleveland Indians, soon to be known as the Guardians, have resolved a lawsuit filed by a local roller derby team over naming rights. Both will be called the Guardians. The legal issue was the final hurdle for the Major League Baseball team to continue its name changeover. The sides jointly announced an “amicable resolution.” No other terms of the agreement were disclosed. The American League franchise has been known as the Indians since 1915. The club will be known next season as the Guardians, a name chosen following a yearlong process that sprang from a national reckoning over racist names and symbols.

WMU gives up lawsuit fight over vaccines for athletes
Western Michigan University has agreed to stop opposing a legal challenge by athletes who declined to get a COVID-19 vaccine. The school says it will follow the terms of an injunction ordered by a federal judge and affirmed in October by an appeals court. It allows athletes to play their sport while also undergoing regular testing for the virus and wearing masks when appropriate. WMU began the fall season by requiring athletes to be vaccinated against COVID-19. At least 16, mostly women, sought an exemption on religious grounds but were turned down. Outside the athletic department, COVID-19 vaccinations are encouraged but not required for WMU students and staff.

Soccer – Weah’s goal gains US bumpy 1-1 draw at Jamaica in qualifier
Tim Weah’s 11th-minute goal was matched by Michail Antonio’s spectacular 34-yard strike in the 22nd minute, leaving the United States with a 1-1 draw against Jamaica in a World Cup qualifier. Coming off Friday’s 2-0 home win against Mexico, the U.S. was looking to move into strong position to reach the World Cup as qualifying passed the halfway point. But a point on the road still left the Americans on track to claim one of three spots from North and Central America and the Caribbean. Canada beat Mexico to move into first place, one point ahead of the U.S.

Staples Center is changing its name to Crypto.com Arena
The Staples Center in downtown Los Angeles will be renamed Crypto.com Arena on Christmas. The home of the NBA’s Lakers and Clippers, the NHL’s Kings and the WNBA’s Sparks will change its name after 22 years. A person with knowledge of the naming rights deal tells The Associated Press that Crypto.com is paying $700 million over 20 years to rename the building. The person spoke on condition of anonymity because the parties aren’t publicly announcing the terms of what’s believed to be the richest naming rights deal in sports history.

IOC gives sports new advice on transgender athlete rules
The IOC is aiming to help sports write fair, inclusive eligibility rules for transgender and intersex athletes. The Olympic body has now published advice shifting the focus from individual athlete testosterone levels and calling for evidence to prove when a performance advantage exists. The IOC says no athlete should be excluded from competing based on an “unverified, alleged or perceived unfair competitive advantage due to their sex variations, physical appearance and/or transgender status.” The 10 principles documented follow years of consultation with medical and human rights experts and athletes. It’s not legally binding on governing bodies which regulate their own sports.