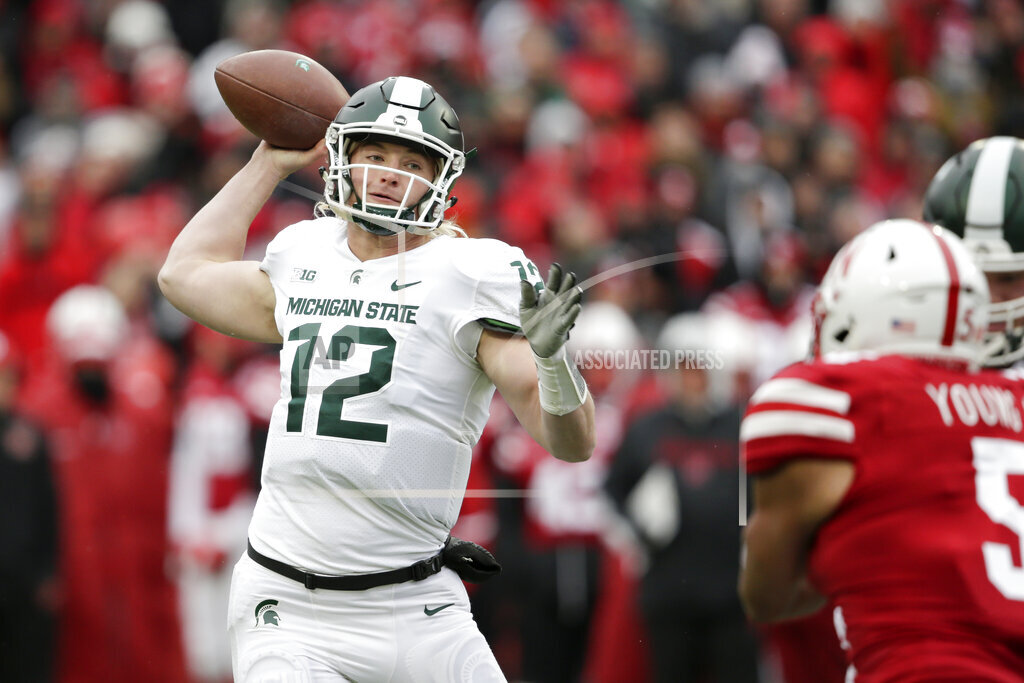 NCAA Football – Tucker still mum on QB as Michigan State opener approaches
Mel Tucker’s success in his first season as Michigan State’s coach may be determined in large part by who is playing quarterback. Right now, there’s no indication of who that’s going to be. Tucker inherited a program rife with uncertainty, and the quarterback spot is just one glaring area that must be resolved. Gone is Brian Lewerke, who started 38 games and became the school’s career leader in total offense. Rocky Lombardi and Theo Day return after playing a bit last season. Redshirt freshman Payton Thorne is also an option, and Tucker mentioned freshman Noah Kim as well when assessing the position.

NCAA Football – Driving range: Notre Dame’s Doerer gets kick out of golf
Notre Dame kicker Jonathan Doerer pays careful attention to the nuances of his stance, swing path and ball contact — and not just in football. He also frequents the driving range in golf. The Charlotte, North Carolina, native says the practice helps with both sports. He was 17 for 20 on field-goal tries last season. Through four games this season, Doerer is 15 for 15 on extra points and 5 for 7 on field goals. The third-ranked Fighting Irish visit Pittsburgh this weekend.

Dodgers 9, Rays 3 – Fall Classic begins with Dodgers rout of Rays
The Los Angeles Dodgers are three wins away from their first World Series title in 32 years. Cody Bellinger and Mookie Betts homered to support Clayton Kershaw as the Dodgers whipped the Tampa Bay Rays, 8-3 at Globe Life Park in Arlington, Texas.  The Dodgers went ahead, 2-0 on Bellinger’s two-run homer in the fourth before tacking on four more runs in the fifth. Bellinger was fit to play after suffering a right shoulder injury while celebrating his tiebreaking home run in Game 7 of the NLCS two nights earlier.  Bellinger went deep off Tyler Glasnow, who struggled with his command. Glasnow was reached for six runs on three hits and six walks in 4 1/3 innings.  Kevin Kiermaier’s solo blast in the fifth pushed Tampa Bay within a run before Betts scored on a fielder’s choice in the bottom half to restore L.A.‘s two-run lead. Will Smith, Chris Taylor and Kike Hernandez followed with RBI singles. Betts led off the bottom of the sixth with a blast to widen the gap. Justin Turner and Max Muncy added consecutive doubles to give Los Angeles an 8-1 lead.  Kershaw limited the Rays to two hits and a walk while striking out eight over six innings. Kershaw is 3-1 this postseason.

MLB – Pandemic World Series draws smallest crowd in over century
A crowd of 11,388 attended the World Series opener between the Los Angeles Dodgers and Tampa Bay Rays, the lowest count in a Fall Classic since Game 6 in 1909. They spread in groups of up to four, mostly in alternate rows and none directly behind each other among the forest green seats. Major League Baseball made about 28% available of the 40,518 capacity at the new retractable-roof stadium of the Texas Rangers. World Series games are usually festive. This one had a surreal feel caused by the coronavirus pandemic.

MLB – Manfred likes larger playoff, runner in extras
Baseball Commissioner Rob Manfred says he hopes to keep two of this year’s innovations: expanded playoffs and starting extra innings with runners on second base. Manfred also says the 30 teams combined for $3 billion in operating losses due the pandemic, which caused all 898 regular-season games to be played in empty ballparks without fans. After opening day was delayed from March 26 to July 23, MLB and the players’ association agreed to expand the number of teams in the playoffs from 10 to 16. Manfred has previously advocated a future expansion of the playoffs to 14 teams.

NFL – Bears sign former Notre Dame star LB Teo to practice squad
The Chicago Bears signed former Notre Dame star linebacker Manti Teo to their practice squad on Tuesday. A 2012 Heisman Trophy finalist also known for his internet relationship with a person falsely posing as a woman stricken with leukemia, Teo has made 48 starts and 62 appearances over seven seasons with the then-San Diego Chargers (2013-16) and New Orleans Saints (2017-19). He has 307 tackles — 22 for loss — along with 13 pass breakups and two interceptions. He takes the practice squad spot of kicker Kai Forbath, signed Tuesday to the Los Angeles Rams’ active roster.

NFL – NFL teams going for 2 at record-setting rate
Never before have NFL teams gone for 2-point conversions as often as they have this season, even if the decision sometimes has backfired. The 58 attempts through six weeks are the most at this juncture of the season since the NFL adopted the 2-point conversion in 1994. Going for 2 was a big part of the story line from this past weekend, with failures by Houston and Washington leading to losses.

NFL – New Orleans Mayor agrees to start allowing fans at Saints’ home games
The New Orleans Saints will start having fans in the stands for home games after the mayor agreed with the team on a phased plan starting Sunday against Carolina. The plan announced Tuesday will start with 3,000 tickets for Sunday’s game, increasing to 6,000 fans for November games with San Francisco and Atlanta and up to 15,000 in December for games against Kansas City and Minnesota barring any changes in local health and safety guidelines. The Saints had been talking to LSU about possibly playing games in Baton Rouge before this plan was approved.

NFL – California will allow fans at pro sports but not Disneyland
California will allow fans to attend outdoor professional sporting events in areas at less risk for the coronavirus even as it prohibits larger theme parks from reopening. But Tuesday’s announcement by the state’s top health official may have little immediate effect for sports fans. Some teams are done for the year and the home of football’s 49ers won’t immediately ease restrictions. San Francisco meanwhile moved into the state’s least restrictive tier, the first urban area to join much geographically larger and far more rural areas scattered near the Oregon border or in the Sierra Nevada mountain range.