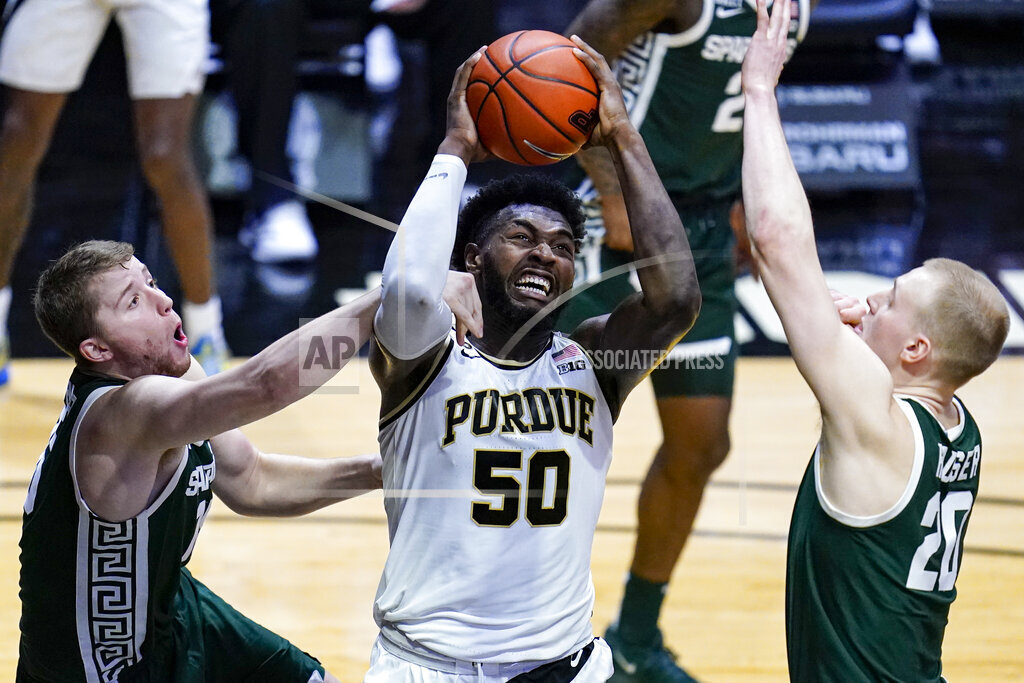 Purdue 75, Michigan State 65 – Williams takes lead late lifting Purdue past Michigan St.
Trevion Williams scored 28 points and Eric Hunter Jr. scored 15 and Purdue pulled away from Michigan State for a 75-65 win. Williams, who shot 13 for 21, scored 10 of Purdue’s last 18 points in the game’s final 4:45. Aaron Henry led Michigan State with 15 points. Based on rankings as of today, Michigan State’s last five contests include matchups against No. 3 Michigan, No. 4 Ohio State and No. 5. Illinois. Purdue faces Nebraska on the road on Saturday. The Boilermakers haven’t won consecutive games since Jan. 17 and Jan. 20.

NFL – Girl hurt in crash involving Chiefs coach Britt Reid awake
family of a 5-year-old girl left in a coma following a crash involving Kansas City Chiefs assistant coach Britt Reid says the girl is now awake. The news was delivered Monday in a post on the GoFundMe page for Ariel Young. The girl has been hospitalized since the Feb. 4 crash. Reid is head coach Andy Reid’s son. Britt Reid was initially placed on administrative leave following the multi-vehicle crash. He’s no longer employed by the team. Police said the crash happened near the team’s training complex next to Arrowhead Stadium when Reid’s truck slammed into two cars on the side of the road. Police say Reid admitted to having “two or three drinks” before the crash.

MLB – Tigers’ GM says team considering 6-man rotation
The Detroit Tigers are considering using a six-man rotation for at least some of this season as they return to a normal-length schedule. General manager Al Avila spoke with reporters Tuesday, the day before Detroit’s first workout for pitchers and catchers. Last year’s abbreviated schedule lightened the workload for pitchers throughout baseball. Matthew Boyd led the Tigers in innings with 60 1/3. It remains to be seen how easily pitchers can re-adjust to a 162-game schedule. Detroit has several young options who are still trying to establish themselves as big leaguers — and whose arms may need to be handled carefully.

MLB – Cubs’ Hoyer to discuss futures with Bryant, Baez, Rizzo
Jed Hoyer plans to chat with Kris Bryant about his future during spring training. Also on deck for the Chicago Cubs president of baseball operations are similar discussions with Javier Báez and Anthony Rizzo. All three sluggers have contracts set to expire after the upcoming season. Hoyer says he would “love to have that continuity" and retain all three, though he acknowledged the odds are slim. Their futures are big questions hanging over the Cubs with the team set to open spring training in Arizona. Pitchers and catchers begin workouts on Wednesday, with position players starting next week.

Tennis – Australian Open quarterfinals underway
Karolina Muchova has moved into the semifinals of the Australian Open after a surprising win over the world’s No. 1 player.  Muchova took an injury early in the second set and rallied to a 1-6, 6-3, 6-2 win over Ash Barty. Her comeback win ended Barty’s bid to become the first Australian woman to win the title in Melbourne since Chris O’Neil in 1978.