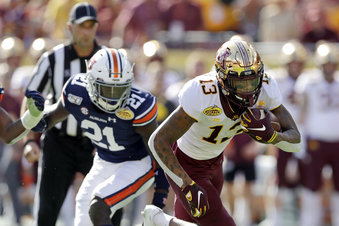 University of Minnesota wide receiver Rashod Bateman has opted out of the 2020 season amid concerns about the coronavirus. He will forgo his remaining two years of eligibility to enter the 2021 NFL draft.

Bateman posted a video on Twitter that he narrated in explanation of his decision. The university confirmed his departure, which Bateman called “the hardest decision that I’ve ever had to make in my life.”

Bateman totaled 111 receptions, 1,923 yards and 17 touchdowns over two seasons. He was a third team All-American in 2019. He won the Big Ten Conference’s receiver of the year award.