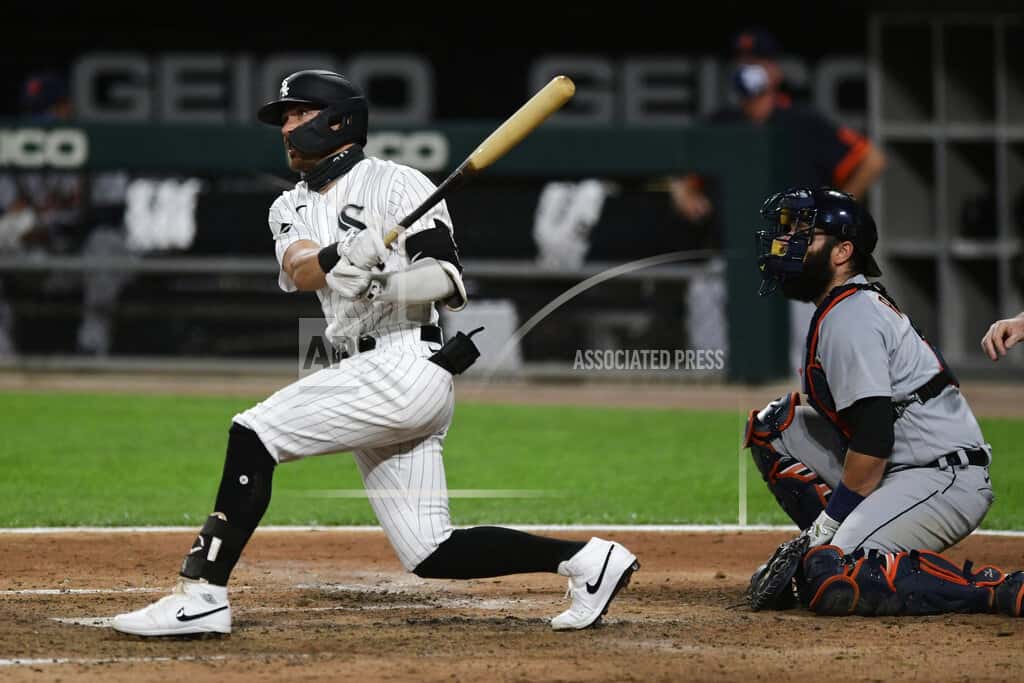 Baseball yesterday…
White Sox 7, Tigers 2
Tim Anderson hit two home runs, including his second leading off a game against Matthew Boyd in six days, and the White Sox posted a 7-2 victory over the Tigers. Luis Robert also homered twice for Chicago, which launched six long balls in all and has 10 in its last two games. White Sox starter Gio Gonzalez allowed two runs in 4 2/3 innings but remained winless this season. He struck out 10, the 15th time he reached double figures in his career.

St. Louis 3, Cubs 1 – game 1
Brad Miller hit a tiebreaking two-run double in the seventh inning to lift St. Louis to a 3-1 win over the Cubs in Game 1 of a doubleheader. St. Louis improved to 3-1 since it returned Saturday after a coronavirus outbreak derailed their season.

Cubs 5, St. Louis 4 – game 2
David Bote hit a three-run homer in Chicago’s four-run sixth inning, and the Cubs beat St. Louis 5-4 for a doubleheader split. With two outs and runners on the corners, Bote put Chicago ahead to stay with a massive drive to center field off Tyler Webb for his second career pinch-hit homer.

The Tigers called up three prospects yesterday to make their major league debuts against the White Sox. General manager Al Avila says right-hander Casey Mize is scheduled to start tomorrow night at Chicago. Avila says left-hander Tarik Skubal will start tonight against the Sox. Mize, a star at Auburn, was the No. 1 pick overall in the 2018 amateur draft. Avila also says infielder Isaac Paredes was called up and infielder Dawel Lugo was designated for assignment. Parades played in last night’s series opener in Chicago.

The Lions have signed running back Jonathan Williams, adding depth in the backfield behind Kerryon Johnson and rookie D’Andre Swift. Williams has 329 yards rushing on 79 carries with two touchdowns over parts of three seasons with the Colts, Saints and Bills.

Kenny Golladay has earned the right to get paid well in the NFL, and he plans do that in Detroit. The Pro Bowl receiver reiterated that he intends to sign a contract extension with the Lions. He has one year left on his deal. Clearly the Lions want Golladay on their roster for years to come. Golladay is hopeful his agent and the Lions will agree on a new deal before the team opens the season Sept. 13.

The Bears remain unsure if fans will be allowed at Soldier Field this season. The Bears say the team and city both believe there can be a sound plan in place to bring fans back once it’s deemed safe. The team canceled season ticket packages last month because of the COVID-19 pandemic and offered holders the option to get refunds for this year or have their payments credited toward 2021. Chicago opens the season Sept. 13 at Detroit and host the New York Giants a week later.

The Canadian Football League has canceled its 2020 season because of the pandemic. The decision marks the first year since 1919 the Grey Cup won’t be awarded.

The NCAA will likely decide in mid-September whether to start the college basketball season on time or have a short-term delay due to the coronavirus pandemic. NCAA senior vice president of basketball Dan Gavitt said in a statement that mid-September will likely be the first of many decisions about the 2020-21 season. Gavitt said the NCAA has developed and studied contingency plans in case the season cannot be started on Nov. 10.

The NBA says its 2021 All-Star weekend in Indianapolis is unlikely to take place as currently scheduled and blocks of hotel rooms that were reserved for the league and its guests have been released. The next All-Star Game was set for Feb. 14, 2021, though the uncertainty of the NBA schedule because of the ongoing coronavirus pandemic has left countless unanswered questions about the 2020-21 season. The league is hopeful of starting next season in December, but that is still far from a lock. And it also remains unclear when fans will be allowed back at NBA games.

From tennis, Simona Halep will skip the U.S. Open, saying she wants to put her health first amid the coronavirus pandemic. Halep is a former top-ranked player who is currently No. 2. She won the title in Prague on Sunday. Six of the top eight women in the WTA rankings won’t play in New York, including No. 1 Ash Barty and defending champion Bianca Andreescu.