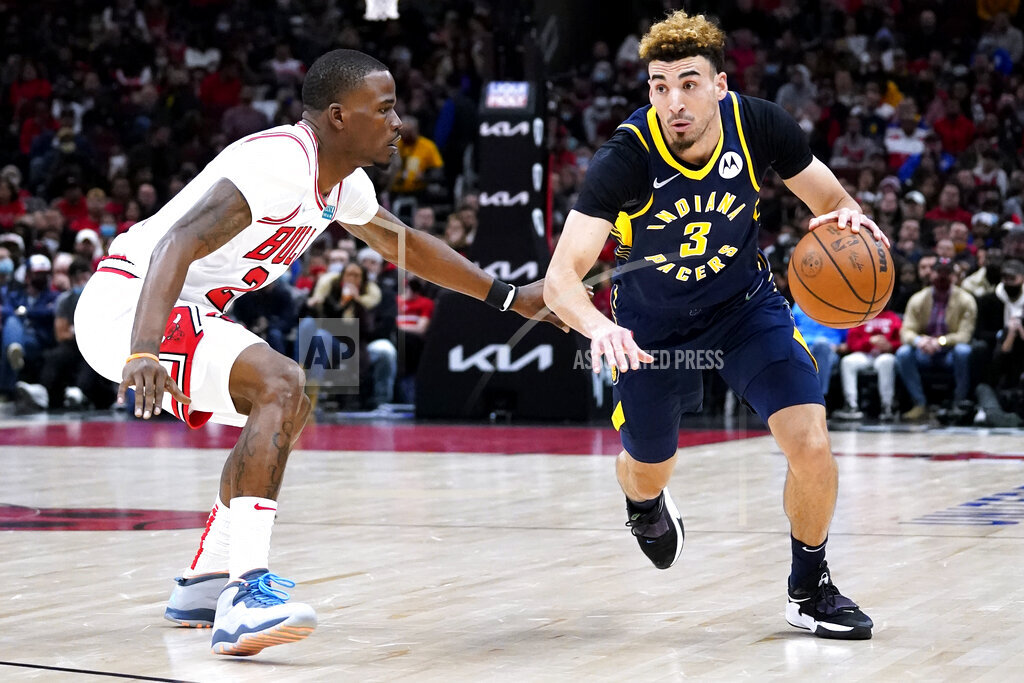 Pacers 109, Bulls 77 – Sabonis, Brogdon pour it on in Pacers’ 109-77 win over Bulls
Domantas Sabonis scored 21 points, Malcolm Brogdon added 16 more, and the Indiana Pacers routed the Chicago Bulls 109-77 on Monday night. Myles Turner also scored 12 points and hauled in 10 rebounds in Indiana’s second straight win. DeMar DeRozan led the Bulls with 18 points, while Zach LaVine scored 17.  It was a one-sided affair for much of the night, with Indiana stretching its lead to as many as 35 points in the fourth. Chicago had a few offensive spurts, but ended up with 36.5% shooting for the game.

NBA – LeBron suspended 1 game, Stewart 2 games for altercation
LeBron James of the Los Angeles Lakers has been suspended for one game and Detroit’s Isaiah Stewart was suspended two games for their roles in an ugly incident during Sunday’s Lakers-Pistons game. The NBA announced the suspensions Monday, and both will affect games on Tuesday. James will not play when the Lakers visit Madison Square Garden to play the New York Knicks. Stewart will miss the Pistons’ home game against Miami on Tuesday and their game at Milwaukee on Wednesday. It is the first suspension in the 19-year career of James, who has won four NBA titles with three teams.

Iowa 109, WMU 61 – Murray scores career-high 29, Iowa routs W. Michigan 109-61
Keegan Murray scored a career-high 29 points in a little over a half and Iowa routed Western Michigan 109-61 to remain undefeated with its fifth straight win. Murray was 10-of-14 shooting and made a pair of 3-pointers. Payton Sandfort scored 19 points and made five 3s for Iowa (5-0). Tony Perkins added 15 points and Kris Murray had 12. Keegan Murray converted a three-point play for his 29th point of the game with about 16 minutes remaining that stretched the Hawkeyes’ lead to 60-30. Lamar Norman Jr. scored 19 points and made five 3-pointers to lead Western (1-3).

#1 Gonzaga 107, CMU 54 – No. 1 Gonzaga routs Central Michigan, to face No. 2 UCLA
Chet Holmgren scored 19 points and No. 1 Gonzaga breezed past Central Michigan 107-54 in the Empire Classic to set up a Final Four rematch with No. 2 UCLA. Gonzaga, the No. 1 team for the 19th straight week, has defeated its first five opponents by an average margin of 33.6 points. Gonzaga, which came into the game averaging 89.8 points per game, topped the 100-point plateau for the first time this season behind double-digit scoring from five players. Nolan Hickman finished with 16 points, Julian Strawther scored 15 points, and Drew Timme and Rasir Bolton each had 11.

Saint Mary’s 62, Notre Dame 59 – Saint Mary’s holds off Notre Dame 62-59 in Maui Invitational
Dan Fotu scored 22 points and hit a big 3-pointer in the final minute, lifting Saint Mary’s to a 62-59 win over Notre Dame in the Maui Invitational. The Gaels and Irish each faced their first big tests of the season and neither gave an inch, trading the lead 16 times. Saint Mary’s went up two on Fotu’s 3-pointer with 46 seconds left and was still up one after Cormac Ryan made 1 of 2 free throws. Tommy Kuhse, who had 14 points and four assists, hit two free throws with 4 seconds left, giving the Irish a final shot to tie it. Notre Dame couldn’t get a good look and Ryan missed a desperation 3-pointer at the buzzer. The Gaels move on to face Oregon in the semifinals.

Buccaneers 30, Giants 10 – Tom Brady tosses 2 TDs, Buccaneers beat Giants 30-10
Tom Brady threw for 307 yards and two touchdowns and the Tampa Bay Buccaneers beat the New York Giants 30-10. The Super Bowl champion Buccaneers snapped a two-game losing streak as Brady avoided dropping three in a row for the first time since 2002. Daniel Jones threw a TD pass to left tackle Andrew Thomas and the Giants stayed close for one half before unraveling. Down 17-10, the Giants drove to the Buccaneers 25 on the opening drive of the third quarter before Jones was pressured and threw incomplete on fourth-and-1. Jones threw two interceptions and was sacked twice.

NCAAFB – Harbaugh hopes changes help Michigan finally beat Ohio State
Jim Harbaugh shook up his coaching staff after his contract at Michigan was reworked last winter. It has seemed to work because the Wolverines are ranked sixth in the AP Top 25 and the College Football Playoff rankings. Harbaugh desperately hopes the many changes he made helps Michigan finally beat Ohio State on Saturday. The second-ranked Buckeye are favored to win by more than a touchdown. They have won eight straight and 15 of 16 against the Wolverines.

MLB – Cubs acquire outfielder Ramirez from Guardians for cash
The Chicago Cubs have acquired outfielder Harold Ramirez from the Cleveland Guardians for cash. The 27-year-old Ramirez batted .268 with seven home runs and 41 RBIs in 99 games for Cleveland last season. He was designated for assignment on Friday. Ramirez is a .271 hitter over parts of three seasons with Miami and the Guardians. He ranked sixth among NL rookies with 116 hits for the Marlins in 2019. The Cubs finished fourth in the NL Central at 71-91 and missed the playoffs after making them five of the previous six years.

Golf – PGA Tour ups ante as prize money pushes toward $500 million
The PGA Tour is raising its prize money even more, closer to the $500 million mark. In a memo obtained by The Associated Press, Commissioner Jay Monahan says comprehensive earnings will be around $685 million. That includes several layers of bonuses beyond the prize money. The PGA Tour board approved some of the increases at its last meeting. That includes the two FedEx Cup playoff events going to a $15 million purse. The three invitationals at Riviera, Bay Hill and Muirfield Village now have $12 million purses. Throw out opposite-field events, and the average purse is $9 million.