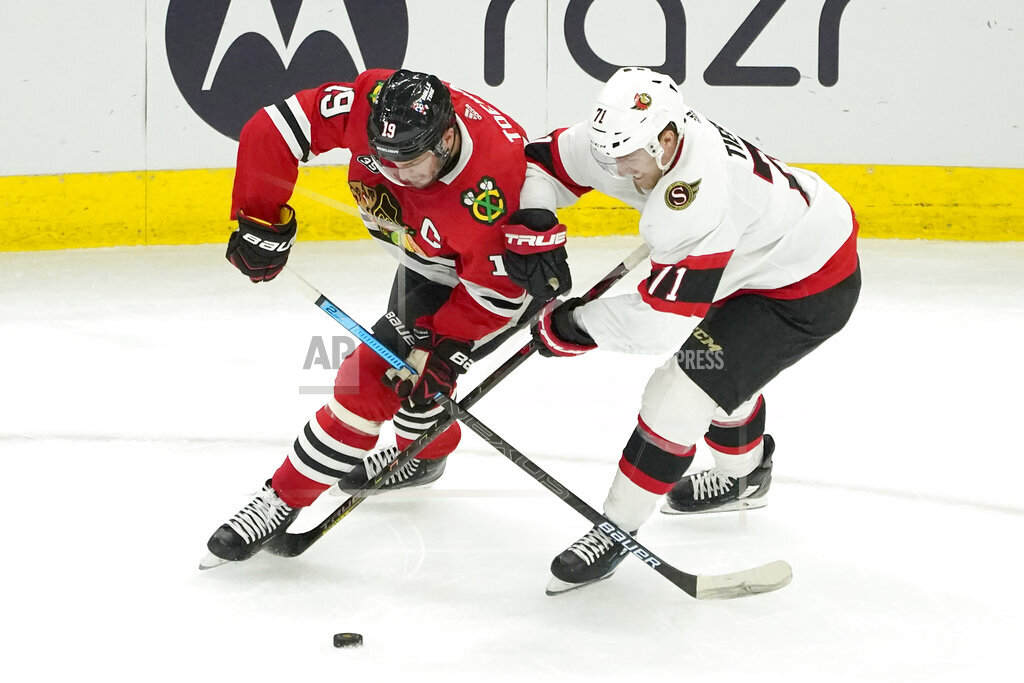 Blackhawks 5, Senators 1 – Kane gets hat trick as Blackhawks beat Senators for 1st win
Patrick Kane had three goals and an assist in his return to the lineup, and the Chicago Blackhawks beat the Ottawa Senators 5-1 for their first win of the season. Chicago improved to 1-7-2 in front of a half-full United Center. Marc-Andre Fleury made 29 saves, Brandon Hagel scored twice and captain Jonathan Toews had three assists. Kane was sidelined for the previous four games because of the NHL’s COVID-19 protocol.

NHL – NHL defends disciplinary decisions in Blackhawks scandal
Commissioner Gary Bettman has defended the NHL’s decisions and discipline meted out following an investigation into the Chicago Blackhawks’ handling of sexual assault allegations in 2010. Bettman called the organization’s $2 million fine significant. He stood by decisions to let Joel Quenneville coach one more game for Florida and not discipline Winnipeg general manager Kevin Cheveldayoff based on his limited role in Chicago’s front office at the time.

Bulls 128, Celtics 114 – DeRozan scores 37 as Bulls beat Celtics 128-114 to reach 6-1
DeMar DeRozan scored 37 points and the Chicago Bulls rallied from a 19-point, second-half deficit to beat the Boston Celtics 128-114 and improve to 6-1 for the season. Zach LaVine scored 26 points and Nikola Vucevic had 11 points, 10 rebounds and nine assists for the Bulls. Chicago outscored Boston 39-11 in the fourth quarter to turn a 14-point lead into a 14-point victory. Jaylen Brown scored 28 for the Celtics, who have lost three in a row. Al Horford had 20 points and 10 rebounds, and Jayson Tatum scored 20 for Boston.

Chiefs 20, Giants 17 – Butker hits go-ahead FG with 1:07 left as KC beats Giants
Harrison Butker hit a pair of fourth-quarter field goals, including the go-ahead 34-yarder with 1:07 left, and the Kansas City Chiefs scrambled their way to a 20-17 comeback win over the New York Giants. Patrick Mahomes threw for 275 yards with a touchdown and an interception for the Chiefs. They overcame two more turnovers along with 12 penalties for more than 100 yards on a cold, wet night at Arrowhead Stadium. Daniel Jones had 222 yards passing with two touchdowns and a pick for the Giants. But he also was sacked three times, including twice after the Chiefs kicked off with just over a minute left in the game.

NFL – Winston done for year…Surgery for Henry
New Orleans Saints quarterback Jameis Winston is done for the season after suffering a major left knee injury during the second quarter of yesterday’s win over the Buccaneers. An MRI shows a torn ACL and damage to the MCL in Winston’s left knee. Saints coach Sean Payton says he’s content to stick with the three remaining healthy QBs on his roster.  NFL rushing leader Derrick Henry will undergo surgery on his right foot on Tuesday, a damaging blow to the Titans’ offense. Tennessee coach Mike Vrabel says the team isn’t putting a timetable on Henry’s return. The Titans placed Henry on injured reserve this afternoon.

NFL – Von Miller leaves snowy Denver behind for Rams, sunshine
Von Miller is no longer the face of the franchise in Denver. The 11th year linebacker is heading to the Los Angeles Rams for a pair of second-day draft picks next year. Miller is an eight-time Pro Bowl selection and seven-time All-Pro who won the 2011 AFC Defensive Rookie of the Year award and was selected to the NFL’s 2010s All-Decade team. But his crowning achievement was leading the Broncos to a win over Carolina in Super Bowl 50. He was selected as the game’s MVP for his pair of strip-sacks that led to 15 points in Denver’s 24-10 victory.

MLB – With pitchers fried, Braves’ Fried tries to win World Series
The Atlanta Braves lead the World Series three games to two and will try to win the championship Tuesday night when Max Fried starts against the Astros in Houston. The Braves missed a big chance to clinch the crown in Game 5 on Sunday night when they wasted an early four-run lead. The pitching staffs for both teams are pretty worn down by now. But Fried will start on five days of rest, hoping to bounce back from a pair of poor outings in the postseason. Astros rookie Luis Garcia starts on only three days of rest.

NCAAMBKB – Illini’s Cockburn to sit 3 games for selling items too early
The NCAA has suspended Illinois center Kofi Cockburn for the first three games of the season because he sold apparel and memorabilia before new regulations that allow athletes to participate in money-making ventures went into effect. The Associated Press preseason All-American is set to play his first game Nov. 22 against Cincinnati in Kansas City, Missouri. The 7-foot center will miss No. 11 Illinois’ first two home games, as well as a Nov. 15 game against Marquette in the Gavitt Tipoff Games. He is permitted to practice with the team during the suspension.

FIFA – FIFA wraps second set of visits to potential World Cup hosts
FIFA and CONCACAF are inching closer to making the final call on which cities in the U.S., Canada and Mexico will host matches for the 2026 World Cup, with decisions expected sometime next spring. The FIFA and CONCACAF delegation has wrapped up its second set of site visits in Seattle, which is seen as one of the strongest candidates for hosting matches. FIFA chief tournaments and events officer Colin Smith says all site visits should be completed by the end of November, with a decision expected sometime toward the end of March or early April.

FIFA – Mexico to play in empty stadium for 2 World Cup qualifers
Mexico will have to play in an empty stadium for its next two home games in World Cup qualifying because of persistent anti-gay chants by fans. Mexico will host Costa Rica on Jan. 30 and Panama on Feb. 2. The empty stadium will cost the Mexican soccer federation millions of dollars in lost revenue. FIFA says the federation has also been fined $110,000. There’s been a long-standing campaign to stop fans from directing slurs at opposing players. The anti-gay chants were heard last month when Mexico hosted qualifiers against Canada and Honduras. The Azteca Stadium drew a combined attendance about 130,000 fans for those games.

Kobe – Judge says Kobe’s widow won’t have to undergo mental exam
A federal judge says Kobe Bryant’s widow won’t have to undergo psychiatric testing in her lawsuit over graphic photos of the helicopter crash that killed the basketball star, her 13-year-old daughter and seven others. The judge made the ruling Monday in Los Angeles. Kobe and the others died in January 2020 when their helicopter crashed in hills west of Los Angeles as they headed to a girls basketball tournament. His widow’s invasion-of-privacy lawsuit claims first responders took and shared photos of the scene. The county had asked for psychiatric exams of Vanessa Bryant and others to determine if they had suffered emotional distress from photos they hadn’t seen.