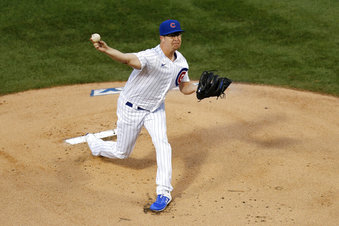 Baseball last night…
Kris Bryant homered in his return to the lineup and Alec Mills pitched seven effective innings, helping the Cubs beat Kansas City 2-0 for their fourth consecutive win. Javier Báez had a sacrifice fly and a nice play in the field as NL Central-leading Chicago improved to 8-2 for the first time since 2016. Bryant also doubled in the first after missing two games with a stomach ailment. Kansas City wasted a solid performance by Danny Duffy, who pitched six innings of one-run ball.

José Abreu hit a tying, two-run homer in the seventh inning, Leury García scored on a wild pitch in the eighth and Yoan Moncada added a solo shot in the ninth to lift the White Sox over Milwaukee 6-4 in the Brewers’ belated home opener. Milwaukee was set to open Miller Park for a weekend series against St. Louis, but that was postponed after numerous Cardinals tested positive for the coronavirus. The Brewers had been idle since Wednesday at Pittsburgh. Chicago has won five straight, all on the road. Starter Carlos Rodón was pulled after two innings with left shoulder soreness.

This week’s baseball series between the Tigers and St. Louis has been postponed. Originally, last night’s game had been postponed, but Major League Baseball announced yesterday that the entire series has been called. MLB made the move because seven Cardinals players and six staff members have tested positive for COVD-19. The Tigers will now be idle until Friday when they travel to Pittsburgh. St. Louis’ tentative plan is to resume their schedule Friday as they host the Cubs. Major League Baseball has not indicated when or how the Tigers will make up the four game series.

NHL last night…
Connor McDavid’s hat trick was the difference in Edmonton’s 6-3 win over the Blackhawks, evening the qualifying series at a game apiece. McDavid opened the scoring just 19 seconds in and added another goal less than four minutes later. Alex Chiasson added a goal and an assist for the Oilers. Patrick Kane, Slater Koekkoek and Ollie Maatta scored for Chicago. Game 3 in the series is Wednesday.

Major League Baseball’s Field of Dreams game in Iowa has been postponed until 2021 because of the novel coronavirus. The game at a newly constructed ballpark on the cornfield adjacent to the site of the 1989 movie had been scheduled for Aug. 13 in Dyersville. The Chicago White Sox originally had been set to host the New York Yankees. When MLB remade its schedule following the delayed start to the season, the St. Louis Cardinals became the opponent. MLB will keep the White Sox for the game next year. The other team has not been determined.

Big 12 schools have agreed to play one non-conference football game this year to go along with their nine league contests as plans for the pandemic-altered season continued to fall into place. The Big 12′s university presidents signed off on a 10-game schedule, adjusted to deal with potential disruptions from COVID-19 that gives schools the ability to play one non-conference opponent at home. The 10-team Big 12 already plays a nine-game, round-robin conference schedule. The conference said league play is tentatively set to begin in mid-to-late September and all non-conference games are expected to be completed before league play starts.

TCU’s chancellor says football coach Gary Patterson has apologized for repeating a racial slur when telling a player to stop using the slur in team meetings. Linebacker Dylan Jordan accused Patterson on Twitter of using the slur during a confrontation at practice. Center Kellton Hollins says the team’s leadership council discussed the issue with Patterson and told him use of the word wasn’t acceptable in any context. School Chancellor Victor Boschini says Patterson didn’t use the slur against any player or group on the team. Boschini says the coach was trying to ask players not to use the slur.

Former wrestling star Dwayne “The Rock” Johnson says he has acquired the XFL. The 48-year-old actor made the announcement on Twitter. Reportedly the price is $15 million. The XFL had eight franchises and played five games out of a planned 10-game schedule before canceling the remainder of its season in March because of the COVID-19 pandemic.