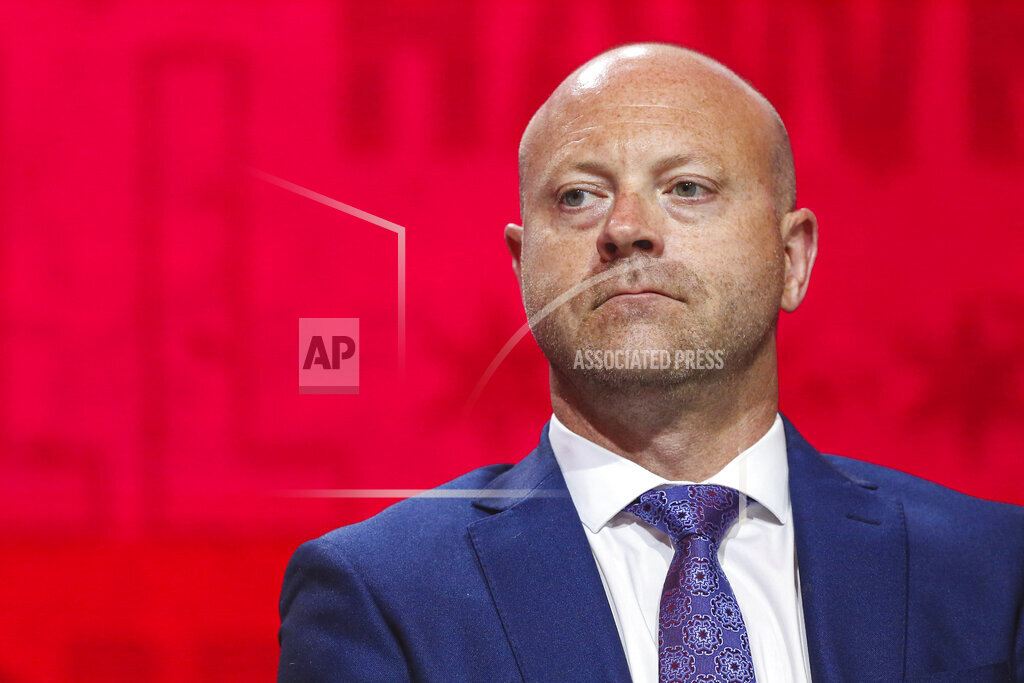 NHL – Blackhawks pledge to release findings of abuse investigation
The Chicago Blackhawks have pledged to release the findings of an independent investigation into allegations a then-assistant coach sexually assaulted two players in 2010. CEO Danny Wirtz told team employees that in a memo. General manager Stan Bowman is among team officials who were reportedly in a 2010 meeting about the allegations and did nothing about it. Bowman reiterated he will cooperate in the investigation. Asked about recusing himself as USA Hockey’s GM for the upcoming Olympics, Bowman says the organization and Blackhawks have had discussions he is not a part of.

NFL – Colts’ QB Carson Wentz out 5-12 weeks with broken foot
Indianapolis Colts quarterback Carson Wentz is expected to miss 5 to 12 weeks because a broken left foot. Coach Frank Reich made the announcement following his return to the practice field after missing all of last week’s workouts because of a positive COVID-19 test. Reich says Wentz will have surgery to remove a piece of bone Monday afternoon. Reich says doctors found Wentz had broken the foot years ago, probably in high school, and that a piece of bone came loose when he hurt the foot last Thursday. For now, Indy plans to use Jacob Eason as the starter. Eason was a fourth-round draft pick in 2020 and has not appeared in an NFL game, regular season or preseason.

NFL – Rams’ Stafford stops passing after hitting thumb on helmet
Los Angeles Rams quarterback Matthew Stafford stopped passing after hitting the thumb of his throwing hand on the helmet of a defensive player near the end of practice Monday. Coach Sean McVay is hopeful it is nothing serious. Stafford was looked at by trainers. He was able to grip a towel and his helmet, which is why McVay was hopeful. The thumb is the same one that Stafford had surgery on during the offseason after he played most of the second half of last season with a partially torn ulnar collateral ligament in the thumb.

NFL – NFL Alumni, CDC fight COVID-19 vaccination hesitancy
NFL Alumni Health announced Monday that in partnership with the Centers for Disease Control and Prevention it is kicking off an outreach and education initiative to help build COVID-19 vaccination confidence. The campaign features some 40 current and retired NFL players who will encourage the public to make the decision to protect themselves, their families and their communities by getting vaccinated. Marshall Faulk says his message is for those hesitant to get the vaccine to seek their doctor’s advice and ignore all the chatter on social media. Rod Woodson says education will lead to more jabs in the arm.

NBA – AP sources: Pelicans send Ball to Bulls, get Hornets’ Graham
Two people familiar with the situation say the New Orleans Pelicans are sending Lonzo Ball to Chicago and acquiring Devonte Graham from Charlotte as part of separate sign-and-trade agreements. The deal for Ball will send Bulls guards Tomas Satoransky and Garrett Temple to the Pelicans. New Orleans is sending a lottery-protected 2022 first-round draft choice to the Hornets. The people spoke to The Associated Press on condition of anonymity because trades can’t become official until Friday under NBA rules. The Klutch Sports agency says Ball agreed to a four-year deal worth $85 million.

NCAAFB – Saban’s new deal worth at least $84.8 million over 8 years
Alabama coach Nick Saban will make $11.5 million in the final year under a new eight-year contract that’s worth at least $84.8 million. The university released details of Saban’s previously announced deal after the board of trustees’ compensation committee formally approved it. Saban, who has won a record seven national championships, is set to make $8.7 million this year with annual raises of $400,000. Saban, who turns 70 on Halloween, also can receive an $800,000 completion bonus each Feb. 28 through 2026 totaling up to $4 million.

NCAAFB – Big Ten – Top QB recruit to skip senior year of HS and join Ohio State
The player considered to be the top quarterback prospect in the class of 2022 says he is skipping his senior year of high school in Texas and plans to enroll at Ohio State for the upcoming semester. Quinn Ewers explained in a Twitter post that he would soon be completing the course necessary to graduate from Southlake Carroll High School outside Dallas. The five-star recruit says his decision was influenced by Texas rules which prohibit him from earning money from endorsement and sponsorship deals. Last month, the NCAA lifted its long-time ban on athletes being compensated for their names, images and likenesses.

NCAA – Big 12 warns of losing 50% of TV value following UT/OU exit
Big 12 Commissioner Bob Bowlsby says losing Texas and Oklahoma to the SEC could slice the value of the league’s next television deal by 50 percent. Bowlsby testified at a hearing of Texas state lawmakers on the impact of conference realignment. Officials from Baylor, TCU and Texas Tech were invited to testify. Baylor athletic director Mack Rhoades says the impact is real. He says there are concerns Baylor will sell fewer tickets, less merchandise and that it’ll be harder to raise sponsor and donor money. Oklahoma and Texas are expected to leave the Big 12 in 2025.

Henry Ford Museum’s new exhibit celebrates motorsports
The newest exhibit at the Henry Ford Museum of American Innovation showcases the progression of motorsports from soap box derbies to the electrifying race cars of today. The “Driven to Win” exhibit took more than a decade from concept to its opening earlier this year. It is a rare collaboration between rivals Ford and General Motors, which is the presenting sponsor of the permanent exhibit. Driven to Win illustrates the energy and emotion, stories, images, thrills and sounds of auto racing. The museum is in Dearborn, Michigan.

Gymnastics – Biles to return for balance beam finals
U.S. gymnast Simone Biles plans to compete in the balance beam this morning. Just a little over a week ago, the 24-year-old Biles stepped away from competition to focus on her mental health. Biles said she was dealing with the “twisties,” what happens when an athlete loses his or her awareness in the air.  Biles had opted out of the finals in the all-around, floor exercise, uneven bars and vault.  The men’s horizontal and parallel bars will also be decided.

Beach Volleyball – US downs defending gold medalists
April Ross is the last medalist standing in the beach volleyball women’s bracket. The American 2016 bronze medalist and partner Alix Klineman ousted defending champion Laura Ludwig of Germany and advanced to the semifinals. Ross and Klineman are the United States’ last hopes for a beach volleyball medal in Tokyo.
Soccer – Canada upsets US with 1-0 win in women’s soccer
Jessie Fleming scored on a penalty kick in the 74th minute and Canada earned a 1-0 semifinal victory over the United States in the Olympic women’s soccer competition. Canada goes on to face Sweden, the late semifinal winner in Yokohama. The gold medal match is set for Friday at the Olympic Stadium in Tokyo. It is the second straight Olympics that the United States has been knocked out of contention for the gold medal. The United States will face Australia for the bronze medal.

Volleyball – Banged-up US women’s volleyball team heads to quarters
Coach Karch Kiraly knew there would be challenges and adversity to overcome if the U.S. women’s volleyball team wanted to win its first Olympic gold medal in the sport. His team has seen two key starters go down with ankle injuries, had an assistant coach sent to quarantine for two weeks and dealt with a straight-set loss to the Russian team. But after finishing pool play with a tense, five-set win over Italy despite setter Jordyn Poulter joining star Jordan Thompson on the injured list, the U.S. heads into the quarterfinals in good form.

Baseball – Japan rallies against bullpen to beat US 7-6 in 10 innings
Yuki Yanagita tied it with an RBI grounder off Scott McGough in the ninth inning, Takuya Kai hit a winning single against Edwin Jackson in the 10th and Japan beat the United States 7-6 Monday night to reach the Olympic semifinals. Japan overcame a 6-5, ninth-inning deficit against McGough, a 31-year-old former Miami Marlins reliever with 16 saves in his third season with the Central League’s Yakult Swallows. He walked Seiya Suzuki with one out as rain started to fall, then allowed a single to Hideto Asamura that put runners at the corners. Yanagita hit a chopper to second, driving in a run on the groundout.

Poland grants visa to Belarus Olympian who fears for safety
Poland has granted a visa to a Belarusian Olympic sprinter who said she feared for her safety and that her team’s officials tried to force her to fly home. In Belarus, the autocratic government has been accused of diverting a flight to arrest a dissident journalist. A Polish Foreign Ministry official says runner Krystsina Tsimanouskaya received a humanitarian visa from the Polish embassy in Tokyo on Monday. The Belarusian Sport Solidarity Foundation told The Associated Press that the group bought her a plane ticket to Warsaw for the coming days. The current standoff apparently began after Tsimanouskaya criticized how officials were managing her team. That set off a massive backlash in state-run media back home, where authorities relentlessly crack down on government critics.

At an extraordinary Olympics, acts of kindness abound
In an extraordinary Olympic Games where mental health has been front and center, acts of kindness are everywhere. The world’s most competitive athletes have been captured showing gentleness and warmth to one another. They’ve been celebrating, pep-talking and wiping away each another’s tears of disappointment. A surfer jumped in to translate for the rival who’d just beaten him. High-jumping friends agreed to share a gold medal rather than move to a tiebreaker. Two runners fell in a tangle of legs, then helped each other to the finish line.

Clean, repeat: At Tokyo Games, virus is Olympians’ chief foe
Tokyo Olympians are exercising extraordinary discipline against the coronavirus. They are sealed off in a sanitary bubble that has made competition possible but is also squeezing a lot of fun from their Olympic experience. They are tested daily, use oceans of sanitizer and face strict restrictions on their movements. They are under instructions not to mix with people outside their teams. They cannot watch sports other than their own or wander around the city. They are told to avoid hugs, high-fives and handshakes. But Olympians say they measures are making them feel safe, even in the most close-contact sport of the Games: wrestling.

Georgian Weightlifter pulled from games after positive steroid test
A shot putter from the country of Georgia has been pulled from the event after testing positive for steroids. Benik Abramyan was due to take part in the shot put qualifying round later Tuesday.