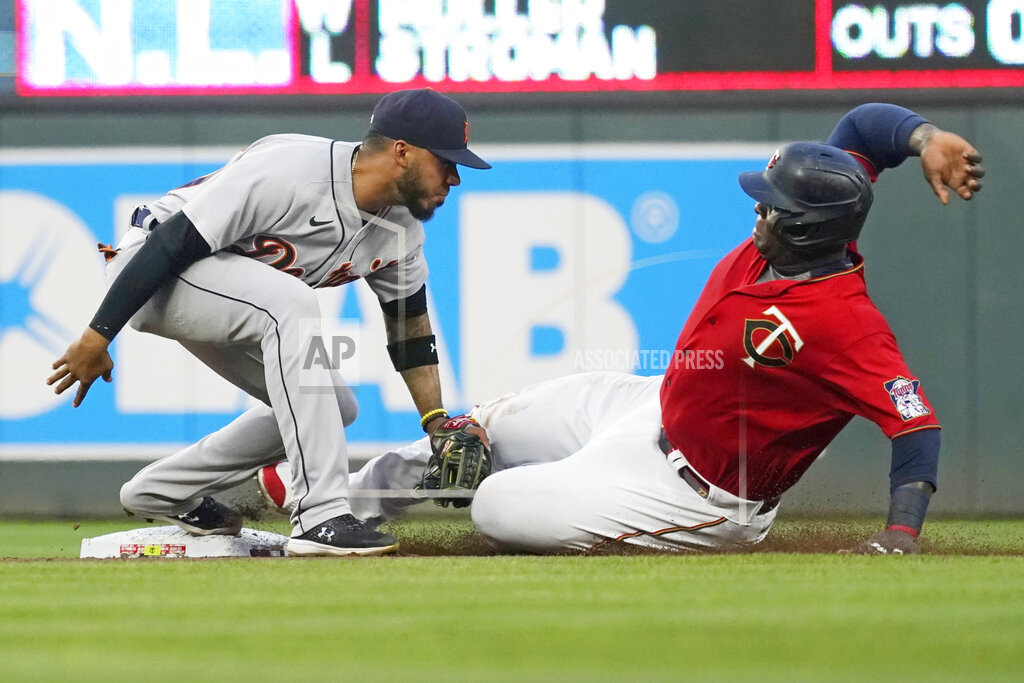 Twins 6, Tigers 5 – F/10 – Kepler’s RBI single gives Twins 6-5 win vs Tigers in 10
Max Kepler’s RBI single in the bottom of the 10th inning against All-Star closer Gregory Soto gave the Minnesota Twins a 6-5 victory over the Detroit Tigers. Soto walked the bases loaded in the ninth before striking out Willians Astudillo on three pitches, finishing him with a 100 mph fastball. Soto had two outs in the 10th before a walk and Kepler’s ninth career game-ending hit. Robbie Grossman’s pinch-hit, two-run homer tied it for the Tigers with one out in the ninth after Twins All-Star closer Taylor Rogers was pulled from the game with a sprained left middle finger.

Cubs 6, Reds 5 – Báez hits bases-loaded single in 9th as Cubs top Reds 6-5
Pinch-hitter Javier Báez hit a bases-loaded single in the bottom of the ninth inning to give the Chicago Cubs a 6-5 win over the Cincinnati Reds on Monday night. Anthony Rizzo homered in his second straight game for the Cubs. Joey Votto homered for the third time in three games and drove in three runs for Cincinnati, which dropped its second straight and lost for the seventh time in 10 games. Kyle Farmer added a homer as the Reds’ winning streak against Chicago ended at four.

MLB – A’s get lefty reliever Chafin from Cubs for 2 minor leaguers
The Oakland Athletics fortified their bullpen by acquiring left-hander Andrew Chafin from the Chicago Cubs for two minor leaguers. Chafin was 0-2 with a 2.06 ERA in 43 relief appearances covering 39 1/3 innings for the Cubs this season. The deal was announced following their 6-5 win over Cincinnati and could signal more moves to come from Chicago. The Cubs received outfielder Greg Deichmann and right-hander Daniel Palencia. Oakland is in second place in the AL West and holds the league’s second wild-card spot. The disappointing Cubs are fourth in the NL Central at 50-51 and could be a busy seller before Friday’s trade deadline.

NFL – Waiting for Rodgers
It’s anyone’s guess as to whether three-time NFL Aaron Rodgers shows up at Green Bay Packers training camp this week. Even the team’s top executive isn’t sure. Packers president/CEO Mark Murphy remains hopeful the quarterback will play for them this season, but says he doesn’t know whether Rodgers will arrive for the start of camp. Murphy’s comments followed an NFL Network report that Rodgers has indicated to people close to him he does plan to play for the Packers this season. ESPN later reported that Rodgers and the Packers were close to an agreement that would include voiding the 2023 season from his contract. The Packers’ camp opens on Wednesday.

NFL – Colts Head Coach has COVID despite vaccination
Colts coach Frank Reich will miss the start of training camp after testing positive for COVID-19. General manager Chris Ballard says Reich’s test came back late last week and that he has had no symptoms. While Reich is fully vaccinated, Ballard says it is unlikely Reich will return to practice until early next week.

NCAA – With eye on SEC, Oklahoma, Texas move toward leaving Big 12
Oklahoma and Texas took the first formal step toward moving to the Southeastern Conference. They notified the Big 12 that they would not be renewing an agreement that binds the league’s members through 2025. The schools sent out a joint statement that made no mention of the SEC and said they intend to honor agreements that give the conference control of the school’s media rights. Those arrangements run concurrent with the Big 12’s television contracts with ESPN and Fox. Texas and Oklahoma have been in discussions with the SEC about joining the league, though neither the two schools nor the powerhouse conference has acknowledged that publicly.

Basketball – US women win 50th straight Olympic game over Nigeria
A’ja Wilson had 19 points and 13 rebounds in her Olympic debut to help the U.S. beat Nigeria 81-72 in the opener for both teams. The win was the Americans’ 50th consecutive victory in the Olympics dating back to a loss in the semifinals of the 1992 Barcelona Games. Diana Taurasi, who was playing in her first game in nearly a month after suffering a hip injury, has competed in the last 33 of those victories to set a record for most games in the Olympics. Ezinne Kalu scored 16 to lead Nigeria.

Swimming – Alaskan swimmer wins gold
Alaska, of all places, has an Olympic champion at the pool. Seventeen-year-old Lydia Jacoby gave the United States a victory in the women’s 100-meter breaststroke, knocking off defending champion and teammate Lilly King. Jacoby was the first swimmer from the Arctic state ever to make the U.S. Olympic swimming team. Now she’s heading back to her hometown of Seward, Alaska, with a gold medal. South Africa’s Tatjana Schoenmaker claimed the silver while King settled for bronze. Jacoby’s stunning win salvaged what had been a disappointing morning for the U.S. team, which had only managed a pair of bronzes before the teen came through.

Swimming – US streak in 100m backstroke ends
For the first time since 1992, the American men have lost a backstroke race at the Olympic pool. Russia swept the top two spots in the 100-meter back, with Evgeny Rylov claiming the gold medal in 51.98 seconds and teammate Kliment Kolesnikov taking the silver in 52.00. Defending Olympic champion Ryan Murphy settled for the bronze in 52.19.

Beach Volleyball – Ross/Klineman win 16th straight
The American “A-Team” of April Ross and Alix Klineman have guaranteed themselves at least one more beach volleyball match by beating Spain 21-13, 21-16 for their second straight win. With one more game in the preliminaries left, they can do no worse than a three-way tie for first. The deadlock would be broken during a “lucky loser” matchup after the round-robin.

Volleyball – US women’s volleyball hands China 2nd straight loss
The expected Olympic showdown between the top two women’s volleyball teams in the world turned out to be a one-sided affair. The U.S. women swept defending gold medalist China 29-27, 25-22, 25-21 in a pool-play match that left the Americans at the top of Pool B and the Chinese seeking to win their first set of the tournament after two straight sweeps to open the Games. China was also swept by Turkey in the opener but showed five years ago in Rio de Janeiro how little the pool-play matches can mean after losing three of five of them before rallying to win gold.

Gymnastics – Biles tries to lead Team USA to 3rd consecutive gold medal
Simone Biles and Team USA seek their third consecutive gold medal in women’s gymnastics in Tuesday’s team final. The Americans trail the Russian Olympic Committee. Biles is set to compete in all five events. In swimming, Katie Ledecky and Caeleb Dressel return to the pool with Ledecky seeking a second straight gold medal in the women’s 200-meter freestyle and a later attempt to win the Olympic debut of the women’s 1,500-meter freestyle. The U.S. women’s soccer team plays its final match in group stage play and the US men’s basketball team plays Iran while seeking its 1st win.

Tokyo Olympic flame is the first powered by hydrogen
Inspired by the sun, the Tokyo Olympic cauldron is designed to be better for the planet. The flame at Tokyo’s National Stadium and another cauldron burning along the waterfront near Tokyo Bay throughout the games will be sustained in part by hydrogen, the first time the clean fuel source will be used to power an Olympic fire. Previous flames have usually run on propane, although magnesium, gunpowder, resin and olive oil have also been used since the first modern cauldron was lit for the Amsterdam Games in 1928. The torch relay was introduced eight years later for Berlin.

Olympic broadcasters curb sexual images of female athletes
Each Olympics aims to set the highest level of television standards. The head of broadcasting at the Tokyo Games wants to reach this goal by banishing overly sexualized images of female athletes. A wider Olympic program targets gender equity on the field of play and on screen. One mantra for broadcasters is “sport appeal, not sex appeal.” Olympic Broadcasting Services chief executive Yiannis Exarchos says viewers will no longer see the kind of close-ups on women’s bodies they might have seen at past Olympics. It comes as more female athletes oppose wearing uniforms they believe exploits their sexuality.

NBC mum on Chinese complaints about map during ceremony
NBC is not responding to complaints from China over how the network depicted the country’s map when its athletes marched in the opening ceremony at the Tokyo Olympics. The Chinese consulate in New York and several social media accounts complained because the map showed by NBC did not depict disputed territories like the island of Taiwan, which China considers a breakaway province. The issue is worth watching since NBC Universal is contracted to broadcast and stream next year’s Winter Olympics in Beijing. The consulate general says NBC “harmed the dignity and emotions of the Chinese people.”

Softball – Lawrie gets win, Canada beats Mexico 3-2 for softball bronze
Canada won its first Olympic medal in softball, taking the bronze with a 3-2 win over Mexico on behind 2 1/3 innings of scoreless, one-hit relief from Danielle Lawrie, the sister of former major leaguer Brett Lawrie. Lawrie is a veteran of Canada’s 2008 Olympic team and the 2009 and ’10 USA college player of the year at the University of Washington. She relieved with runners at the corners and retired Victoria Vidales on a groundout. Lawrie struck out four, fanning Brittany Cervantes to end it. Kelsey Harshman broke a 2-2 tie in the fifth with a sacrifice fly.

Tropical storm to bring rain, wind, waves to northeast Japan
An offshore tropical storm brought wind and rain to the Tokyo region and affected some Olympic events Tuesday as it headed toward northeastern Japan. Stormier conditions were forecast north of the capital in advance of Nepartak making landfall around midday Wednesday. The Japan Meteorological Agency says the tropical storm has winds of 44 mph that will weaken before landfall. Storm and high wave warnings were issued for the coastal areas of Miyagi and Fukushima prefectures. Super-express train services were to be suspended from Tuesday evening possibly until Wednesday morning.