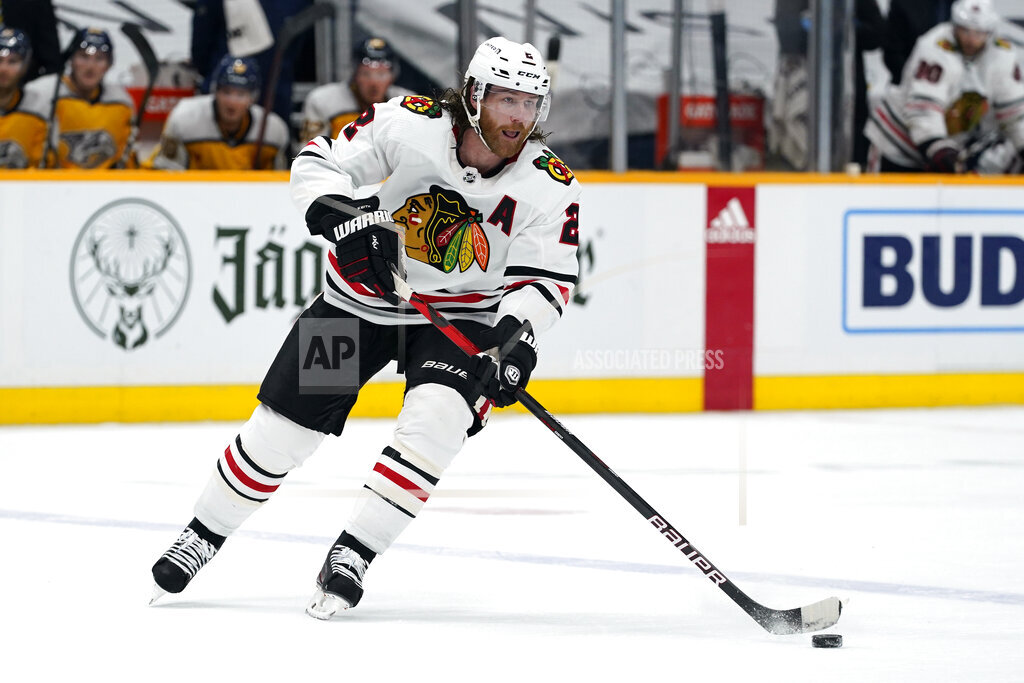 NHL – Blackhawks trade Keith to Oilers for Jones, 3rd-rounder
The Chicago Blackhawks have traded two-time Norris Trophy winner Duncan Keith to the Edmonton Oilers for young defenseman Caleb Jones and a third-round draft pick. The Blackhawks also sent forward Tim Soderlund to the Oilers, who were looking for some help on defense after they were swept by Winnipeg in the first round of the playoffs. The 2022 draft pick becomes a second-rounder if Edmonton reaches next year’s Stanley Cup Final and Keith is among the top four Oilers defensemen in total ice time through three rounds. Keith has two years left on his contract at a salary-cap hit just over $5.5 million. He turns 38 on Friday.

NHL – Former player unlikely to participate in Blackhawks review
An attorney who represents a former Chicago Blackhawks player who alleges he was sexually assaulted by a then-assistant coach in 2010 is open to the possibility of her client participating in the team’s review of the accusations under certain conditions. Susan Loggans, an attorney who represents the former player and another person suing the team, says her clients were open to participating in the review by Jenner & Block. But she says they want to know more about the parameters of the investigation, and they want the opportunity to conduct their own interviews of key former and current team executives.

NHL – Kraken on track for home arena to be ready by mid-October
Builders say the home for the newest NHL franchise, the Seattle Kraken, remains on schedule to be finished by the middle of October when the NHL season is expected to begin. Executives with construction firm Oak View Group say by the end of July, they expect 93% of the work to be done on Climate Pledge Arena. It’s expected there will be a week of festivities including musical acts surrounding the first Kraken home game. It appears likely that Seattle will begin its first NHL season on the road.

NHL – Lightning dent Stanley Cup after another Tampa boat parade
The Tampa Bay Lightning celebrated their second consecutive Stanley Cup championship with a boat parade in downtown Tampa on Monday. It ended with the Cup getting dented and being sent to Montreal for repairs. Team captain Steven Stamkos set the tone with a T-shirt that read: “BACK TO BOAT.” Hundreds of boats and other watercraft, along with thousands of fans, lined the waterfront under mostly sunny skies. However, a post-parade rally in a downtown park was delayed because of a thunderstorm. This was the third boat parade in Tampa in 10 months. The Tampa Bay Buccaneers also got one after winning the Super Bowl.

NHL – Prosecutor to review goalie Kivlenieks’ fireworks death
Police in Michigan have turned over their investigation into the fireworks death of Columbus Blue Jackets goaltender Matiss Kivlenieks to a prosecutor for review. Novi police Lt. Jason Meier says his department has not requested charges in Kivlenieks’ Fourth of July death. Meier also says Kivlenieks’ death still is considered accidental and the police investigation was complete unless otherwise directed by the Oakland County prosecutor’s office. The 24-year-old died of chest trauma from an errant fireworks mortar blast. Police have said the firework at a private home northwest of Detroit tilted slightly and started to fire toward people nearby. Kivlenieks was in a hot tub and was trying to move out of the way of the firework when he was struck.

NFL – Detroit Lions can have Ford Field at full capacity this year
The Detroit Lions say Ford Field can be at full capacity this season, a year after the public did not have access to games during the pandemic. The Lions said the decision was made in large part because of Michigan’s steady COVID-19 vaccination rate. The team will follow the state’s reopening guidelines and will not require fans to wear masks. The Lions will not ask spectators for proof of vaccination status, but they will encourage unvaccinated fans to wear a face covering.

Olympics – USA Basketball falls again, this time 91-83 to Australia
These games don’t count. Right now, that is the only saving grace for USA Basketball. And for quite probably the first time in 29 years of NBA players suiting up for the national team, they heard boos when a game ended — on home soil, no less. Patty Mills scored 22 points and Australia held the U.S. without a field goal for the final 4:34 on the way to beating the Americans 91-83. The three-time defending Olympic gold medalists dropped to 0-2 in their five-game slate of exhibitions leading up to the Tokyo Games.

Olympics – How will the virus emergency affect the Olympics?
A virus state of emergency has begun in Japan’s capital, as the number of new cases is climbing fast and hospital beds are starting to fill just 11 days ahead of the Tokyo Olympics.  The main target of the new state of emergency is alcohol served at bars and restaurants as authorities want people to stay home and watch the games on TV and not gather in public. Like past emergencies, most of the measures are requests because the government lacks a legal basis to enforce hard lockdowns.  The state of emergency will cover the entire duration of the July 23-Aug. 8 Olympics and its main impact will be in barring fans from stadiums and arenas in the Tokyo area.

Euro2020 – Racist abuse targets 3 English players who missed penalties
British police have opened investigations into the racist abuse of three Black soccer players who missed penalties in England’s shootout loss to Italy in the European Championship final. The Metropolitan Police are condemning what they call the “unacceptable” abuse of Marcus Rashford, Jadon Sancho and Bukayo Saka and say they will be investigating the “offensive and racist” social media posts published soon after Italy won Sunday’s shootout 3-2 after the match ended 1-1. The English Football Association says it is “appalled” by the “disgusting behavior.” It says social media companies should take action to make their platforms free from this “abhorrent” abuse.

NASCAR – Busch brothers closing in on Allisons’ record for Cup wins
Kurt and Kyle Busch are closing in on Bobby and Donnie Allison on the list of most NASCAR Cup Series wins by brothers. Kurt Busch’s win in Atlanta gave the Busch brothers 92 Cup wins _ only two behind the Allisons’ record. Kyle Busch finished second to his older brother at Atlanta Motor Speedway. In the four Cup races in which the Busch brothers have finished first and second, each now has two wins. Neither brother likes losing to the other. Kurt says it may be especially tough for Kyle due to the “little brother syndrome.”

Horse Racing – Judge questions treatment of suspended horse trainer Baffert
A New York federal judge seems sympathetic to horse trainer Bob Baffert’s claims that his May suspension by the New York Racing Association was unconstitutional after Kentucky Derby winner Medina Spirit failed a postrace drug test.  Judge Carol Bagley Amon at a Brooklyn hearing Monday repeatedly pressed a lawyer for the racing association to explain why the suspension was issued before Baffert was given a chance to defend himself. Attorney Henry Greenberg said Baffert will get a hearing after the association announces the length of his suspension by Aug. 11. The judge seemed dissatisfied with that, asking if that’s “a little too late?”