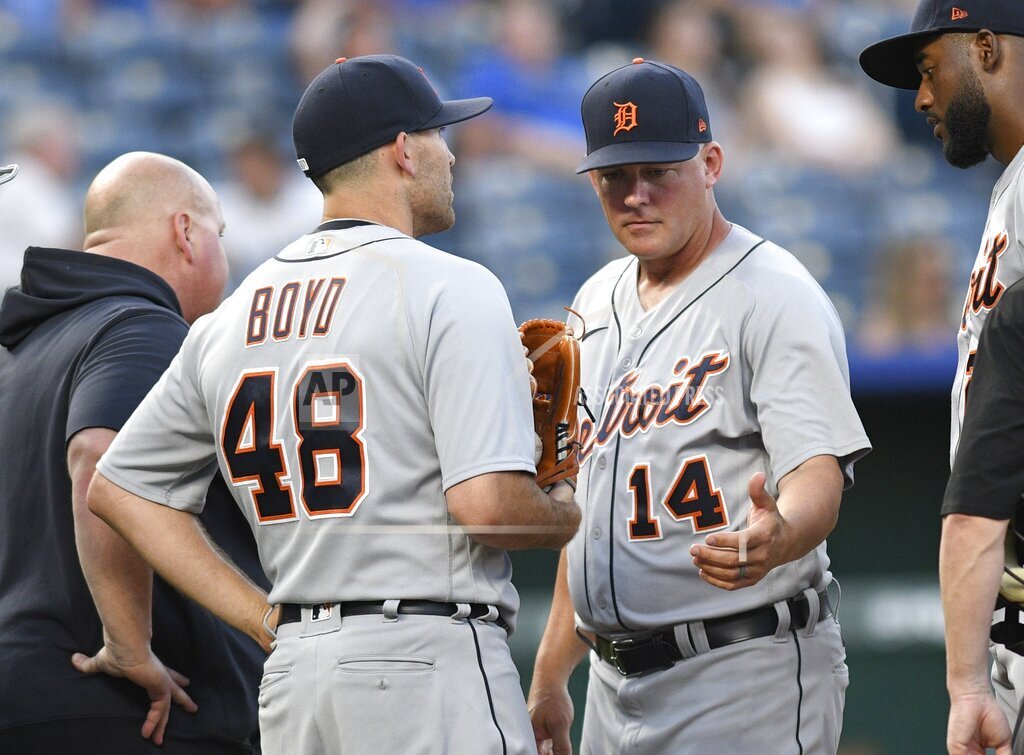 Tigers 10, Royals 3 – Tigers lose 2 pitchers to injuries, end 3-game skid, beat KC
Detroit starter Matthew Boyd and reliever Alex Lange both exited with injuries and the Tigers still ended a three-game losing streak, beating the Kansas City Royals 10-3. Willi Castro, Robbie Grossman and Niko Goodrum homered for Detroit. Miguel Cabrera got three hits and drove in two runs, with his RBI single keying a four-run first inning. The Royals, who have not led since finishing off Thursday’s 6-1 victory in Oakland, lost their fourth in a row. They are a season-worst five games below .500. Boyd departed in the third because of discomfort in his left arm. Lange left after recording just one out in the fifth with an unspecified problem.

Mets 5, Cubs 2 – Peterson, Smith lead Mets to 5-2 home win over Cubs
David Peterson pitched one-hit ball over six scoreless innings for his first win in two months, and the New York Mets beat the Chicago Cubs at home for the first time in exactly four years with a 5-2 victory. Dominic Smith homered for the Mets, who stopped Chicago’s five-game winning streak in the opener of a four-game series between NL division leaders. New York scored all its runs with two outs and snapped a seven-game skid at Citi Field against the Cubs that began on May 31, 2018. Peterson was 0-4 with a 6.32 ERA in his previous nine starts. Anthony Rizzo and Patrick Wisdom hit back-to-back homers for the Cubs. Jake Arrieta took the loss.

Golden Knights 4, Canadiens 1 – Vegas opens Stanley Cup semifinal with 4-1 win over Montreal
Shea Theodore had a goal and an assist, Marc-Andre Fleury made 28 saves and the Vegas Golden Knights beat the Montreal Canadiens 4-1 in the first game of the Stanley Cup semifinal. Fleury has now allowed two or fewer goals in nine of his 13 playoff appearances this season. Alec Martinez, Mattias Janmark, and Nick Holden also scored for the Golden Knights. Rookie Cole Caufield scored his first career playoff goal for Montreal, while goaltender Carey Price made 26 saves.

WNBA – US Olympic team to face WNBA players in Vegas All-Star Game
The WNBA will hold its All-Star Game in Las Vegas on July 14 pitting the U.S. women’s national team that will play in the Olympics against some of the league’s best players. Voting for the WNBA’s team, which starts Tuesday, will be determined from a pool chosen by fans, players and media members. Players can vote for themselves. Coaches will chose the 12-player WNBA team from the top 36 vote-getters who aren’t on the U.S. Olympic team. Coaches can’t vote for their own players.

CFL – The CFL is going ahead with its 2021 season.
The Canadian Football League’s board of governors has voted unanimously in favor of an amended collective bargaining agreement and starting the 2021 campaign on Aug. 5. The CFL did not play in 2020 due to the COVID-19 pandemic.  The league unveiled plans in November for a full 18-game season that was to have started in June. The start was later pushed back to August and the number of games was reduced to 14. The league title game, the Grey Cup, also was pushed back three weeks to Dec. 12 in Hamilton, Ontario

Tennis – Wimbledon allowed full crowd at Centre Court for finals
The British government says Wimbledon will be allowed to have a full crowd at Centre Court for the men’s and women’s finals next month. The announcement comes as the government eases restrictions related to the coronavirus pandemic. Wimbledon begins on June 28. The tournament will allow 50% capacity at the start but increase to 100% on Centre Court for the finals. The decision to ease restrictions on crowds will also increase attendances at soccer’s European Championship and other sporting events.