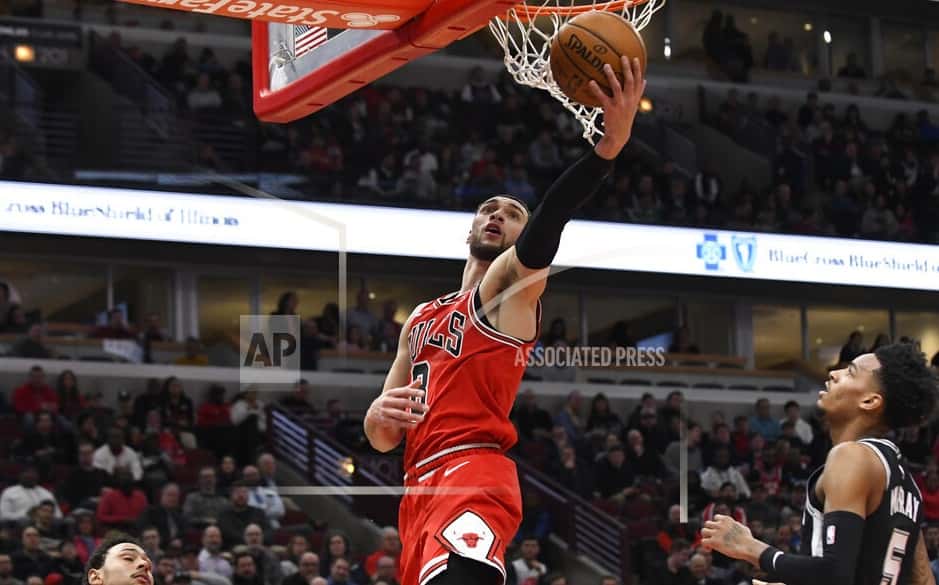 NBA
Cleveland 115, Detroit 100
Kevin Love scored all 20 of his points in the first half, and the Cleveland Cavaliers beat the Pistons 115-100 to snap a seven-game losing streak. Love, an Olympic teammate of Kobe Bryant’s who played college basketball in Los Angeles at UCLA, made six 3-pointers before halftime. It was the first game for either team since Bryant’s death Sunday in a helicopter crash. Collin Sexton had 23 points for the Cavaliers and Tristan Thompson added 17 points and 11 rebounds. Reggie Jackson led Detroit with 16 points. Detroit has now dropped three in a row.

Chicago 110, San Antonio 109
Zach LaVine scored 14 of his 23 points in the fourth quarter, including two clutch foul shots with 2.1 seconds left, and the Bulls beat the San Antonio Spurs 110-109. LaVine won an entertaining duel with DeMar DeRozan after Chicago trailed by 10 heading into the final period. DeRozan tied it at 108 on a tough fadeaway jumper with 8.6 seconds left, but LaVine responded with two free throws after he was fouled by Jakob Poetl on a drive to the basket. DeRozan had 36 points and 10 rebounds for San Antonio.

MEN’S COLLEGE BASKETBALL
Michigan point guard Zavier Simpson has been suspended for an unspecified violation of team policies and will miss tonight’s game at Nebraska. Coach Juwan Howard says Simpson’s status will be evaluated again after that game. Simpson, a senior, averages a team-high 33.8 minutes, along with 12.8 points. He also leads the nation with 8.3 assists per game. Michigan has lost four straight and five of its last six, sinking toward the bottom of the Big Ten after a bright start in Howard’s first season.

COLLEGE FOOTBALL
Grand Valley State University has suspended the football team’s offensive coordinator after he told the school newspaper that Adolf Hitler was a great leader. Morris Berger was quoted as saying he would like to dine with Hitler. He said the Nazi leader had “bad motives,” but whose ability to lead “was second-to-none.” Berger also said he’d like to meet President John F. Kennedy and explorer Christopher Columbus. The Associated Press was unable to find a phone listing for Berger. An email seeking comment was sent to his university account.

TENNIS – AUSTRALIAN OPEN
Unseeded American Tennys Sandgren gave Roger Federer a tough test until the 20-time Grand Slam champion advanced to the Australian Open semifinals. Sandgren took a two-sets-to-one lead before the third-seeded Federer rallied for a 6-3, 2-6, 2-6, 7-6, 6-3 victory. Federer fought off four match points in winning the tiebreaker, 10-8.
Federer will next meet Novak Djokovic, who moved to within two wins of an eighth Australian Open title with a 6-4, 6-3, 7-6 (1) victory over 2016 Wimbledon finalist Milos Raonic.
On the women’s side, top-ranked Ash Barty moved a step closer to ending a four-decade drought for Aussies at the first Grand Slam of the year by pulling out a 7-6, 6-2 victory against seventh seed Petra Kvitova. Barty next faces American and 14th seed Sofia Kenin, who opened the Day 9 action at Rod Laver Arena with a 6-4, 6-4 win over Ons Jabeur.