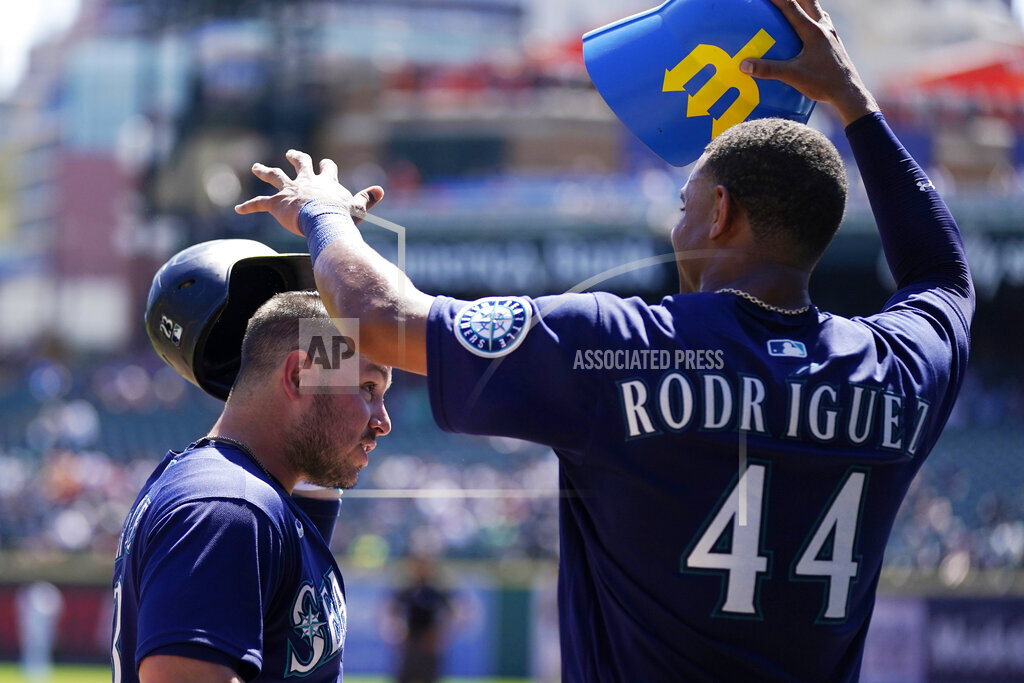 Mariners 7, Tigers 0 – Mariners hand Tigers 18th shutout loss, complete sweep
Julio Rodriguez and Ty France hit back-to-back home runs in the third inning and the Seattle Mariners completed a three-game series sweep by defeating the Detroit Tigers 7-0. It was the 18th shutout loss for the Tigers this season. France and Curt Casali drove in two runs apiece as the Mariners won for the sixth time in seven games. Logan Gilbert (11-5), who had gone winless in his previous nine starts, held Detroit to two hits and a walk while striking out nine in six innings. Gilbert’s last victory came on July 5.

White Sox 7, Royals 1 – Vaughn, Pollock homer, White Sox beat Royals 7-1
Andrew Vaughn and A.J. Pollock each cracked a two-run homer and singled, and the Chicago White Sox topped the Kansas City Royals 7-1. Leury Garcia and Elvis Andrus each added two hits and an RBI and for the White Sox, who won their second straight following a five-game slide to climb back within a game of .500. Chicago improved to 2-1 under bench coach Miguel Cairo, serving in his third game as acting manager while Tony La Russa is on indefinite leave to undergo tests for an unspecified health issue. Johnny Cueto allowed one run on six hits in 5 1/3 innings, walking none and striking out five.

NCAAFB – Mel Tucker leads No. 15 Michigan St against Western Michigan
No. 15 Michigan State opens with Western Michigan on Friday night at home. Mel Tucker was named Big Ten coach of the year last season after winning 11 games, following a 2-5 debut with the Spartans in 2020. Broncos coach Tim Lester is 32-25 in five seasons and is coming off a 52-24 win over Nevada in the Quick Lane Bowl. Michigan State has eight starters back on defense and five on offense. .The Broncos return eight starters on defense and four on offense from last year’s team that was 8-5 overall and 4-4 in the Mid-American Conference.

NCAAFB – No. 8 Michigan aiming higher, hosts Colorado State in opener
No. 8 Michigan wants to surpass the success last year’s team had, and that won’t be easy. The Wolverines won a Big Ten title for the first time since 2004 and earned its first trip to the College Football Playoff. To achieve lofty goals, the Wolverines can’t afford to get stunned in a game that’s expected to be a rout such as Saturday’s opener at home against Colorado State. Former Nevada coach Jay Norvell is making his debut, hoping to help the Rams stay competitive in a game they’re expected to lose by four-plus touchdowns.

NCAAFB – No. 2 Ohio State seeks fast start against No. 5 Notre Dame
No. 2 Ohio State has one of the most explosive offensive attacks in the nation, and coach Ryan Day is stressing a fast start against No. 5 Notre Dame in Saturday night’s season opener. New Buckeyes defensive coordinator Jim Knowles installed a new scheme and a salty attitude in the unit. Emotions will be running high for first-year Notre Dame coach Marcus Freeman, who played linebacker at Ohio State in 2004-08 and coached at Cincinnati under Luke Fickell. The Fighting Irish haven’t beaten Ohio State since 1936.

NFL – Bears set to unveil conceptual plans for suburban stadium
The Chicago Bears are set to unveil conceptual plans for a suburban stadium and entertainment complex next week. The team is considering a move from its longtime home, Soldier Field. The Bears have signed a purchase agreement for a 326-acre tract of land in Arlington Heights, Illinois, about 30 miles northwest of Soldier Field. The team will hold a community meeting in the town next week and detail its plans. Team president Ted Phillips has said a deal likely wouldn’t close until early 2023. That’s when the team would decide if it makes sense financially to pursue the project.

NFL – Bears GM Poles not ruling out long-term contract with Smith
Chicago Bears general manager Ryan Poles remains optimistic the team can agree to a long-term contract with Roquan Smith and repair their relationship after the star linebacker requested a trade. Poles says he has “faith” Smith will “have a good year and we’ll work on our relationship.” Smith was hoping to strike a new deal with the contract he signed after the Bears drafted him with the No. 8 overall pick in 2018 set to expire following this season. He participated in voluntary and mandatory offseason workouts. But with negotiations at a standstill, things took a heated turn once training camp started. He opted to “hold in” and then went public with a trade request while accusing Poles of negotiating in bad faith.

NFL – Ravens’ mascot headed to IR with ‘drumstick’ injury
The Baltimore Ravens are making a feathered addition to their injured reserve list. Coach John Harbaugh announced that Poe — the team’s bird mascot — was going on IR. Poe was carted off the field at halftime of the Ravens’ preseason game against Washington last weekend. Poe was joined by other mascots for a halftime game before being injured. Harbaugh said Poe has a season-ending injury to his drumstick, and the team would find a replacement.

Tennis – US Open – Serena, Venus Williams lose in 1st round of US Open doubles
Serena and Venus Williams have lost in the first round of doubles at the U.S. Open. They were eliminated by the Czech pair of Lucie Hradecka and Linda Noskova 7-6 (5), 6-4 on Thursday night. Arthur Ashe Stadium had never hosted a first-round doubles match until this one featuring two American sisters who have combined to claim 14 Grand Slam titles in doubles but were partnering for the first time since the 2018 French Open. The 17-year-old Noskova was making her Grand Slam doubles debut. The 37-year-old Hradecka won two major doubles trophies with a different partner.

Tennis – US Open – Nadal hits nose with racket, tops Fognini
Rafael Nadal has come back to win at the U.S. Open after cutting himself on the bridge of his nose when his racket bounced off the court and smacked him in the face against Fabio Fognini.  Nadal was bleeding and took a medical timeout. A trainer put a bandage on his nose.  The 22-time Grand Slam champion won the second-round match 2-6, 6-4, 6-2, 6-1 at Arthur Ashe Stadium.  They started Thursday night and finished after midnight.  Play resumed after about a five-minute delay when Nadal hurt himself on the first point of a game with Nadal leading 3-0 in the fourth set.

NBA – AP source: Cavaliers acquiring All-Star G Mitchell from Jazz
A person familiar with the trade tells AP the Cleveland Cavaliers have agreed to acquire All-Star guard Donovan Mitchell in a blockbuster trade with the Utah Jazz. The person spoke on condition of anonymity because the NBA still has to approve the trade. The person says Cleveland is sending guard Collin Sexton, forward Lauri Markkanen and rookie guard Ochai Agbaji along with three unprotected first-round picks to the Jazz. Mitchell is one of the league’s premiere scorers and his acquisition could put the Cavs among the elite teams in the Eastern Conference.

NASCAR – NASCAR drivers feeling the hits more in Next Gen car
The jolts are more jarring and the effects linger for longer for NASCAR drivers in the Next Gen car’s debut season. Racers feel they have taken harder hits in accidents this season than in the past. NASCAR crash analysis agrees, and there have been discussions with drivers about how to improve safety. The issue came to the forefront earlier this summer when Kurt Busch crashed in qualifying at Pocono. He suffered a concussion and still has not been cleared to race. Busch gave up his playoff spot because of his condition.

NBAGL – New rules: G League will set a target score for OT games
Overtime in the G League this season will be a race to seven points. The schedule for the G League’s 22nd season has been was released, with the 50-game slate for teams beginning on Nov. 4 and ending on March 25. And the league is making some changes, with a switch to a “target score” ending for its overtime games among the most significant. The first team to score seven points in the OT period wins, and that extra session will be untimed.

MILB – Minor league unionization getting interest from players
Players on the Single-A Tampa Tarpons have been talking individually about efforts to unionize minor league players and the idea is gaining momentum. Centerfielder Spencer Jones says it is something that definitely interests him. Tampa reliever Ryan Anderson says it makes a lot of sense because it could lead to better benefits down the line. Signed cards from 30% of minor leaguers in the bargaining unit would allow filing a petition with the National Labor Relations Board asking for a union authorization election, which would be decided by majority vote.