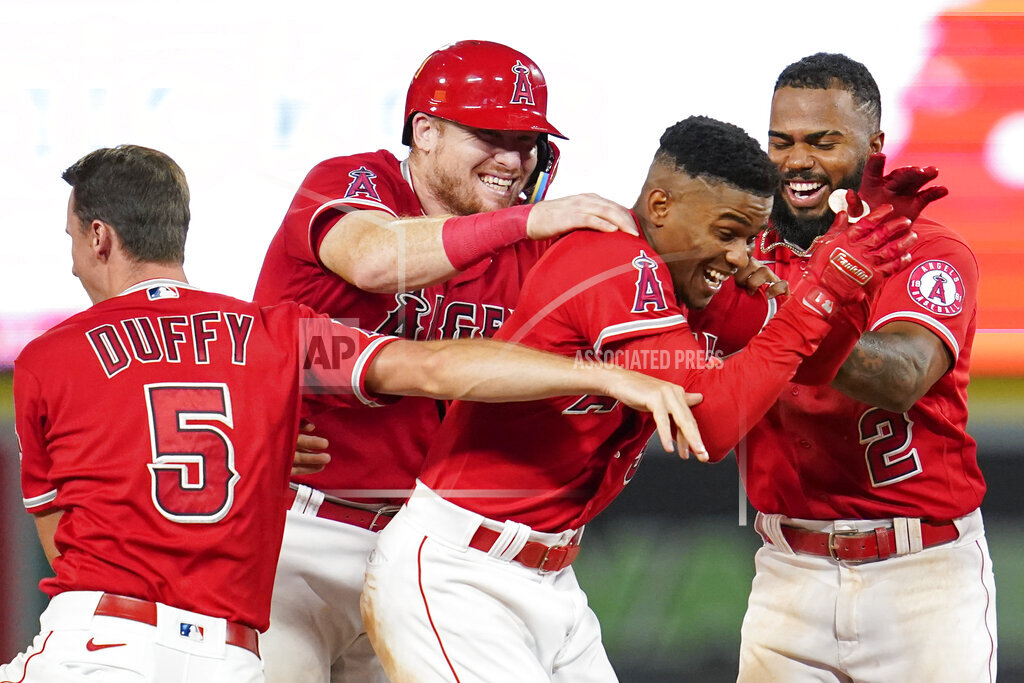 Angels 5, Tigers 4 – F/10 – LA Angels blow lead, rally in 10th for 5-4 win over Tigers
Andrew Velazquez scored from third on Magneuris Sierra’s bunt in the 10th inning and the Los Angeles Angels secured their first winning homestand since early May with a 5-4 victory over the Detroit Tigers. Taylor Ward scored the tying run moments earlier on a throwing error to the plate by shortstop Javier Baez, who had singled home Kody Clemens with the Tigers’ go-ahead run in the top of the 10th. Mike Trout homered in his third consecutive game for the Angels, who have won eight of 11 in their best stretch of play since mid-May. Baez had three RBIs.

Mariners 3, White Sox 0 – Gilbert ties high with 9 strikeouts, M’s beat White Sox 3-0
Logan Gilbert tied his career high with nine strikeouts, Cal Raleigh homered and the Seattle Mariners beat the Chicago White Sox 3-0 to keep the AL wild-card race tight. Raleigh hit a two-run homer in the eighth inning as the Mariners won for the eighth time in nine games. Seattle and Tampa Bay are 1 1/2 games ahead of Toronto, which is 3 1/2 games in front of Baltimore for the final AL wild card. Raleigh has 23 homers, tops among catchers. Chicago has lost two of three and dropped three games behind first-place Cleveland in the AL Central.

Cubs 9, Reds 3 – Wesneski 5 shutout innings in debut, Cubs beat Reds 9-3
Hayden Wesneski allowed two hits over five shutout innings of relief to win his major league debut, and the Chicago Cubs took advantage of 11 walks to beat the Cincinnati Reds 9-3 for their second win in nine games. Wesneski, a 24-year-old right-hander acquired from the New York Yankees on Aug. 1, struck out eight and walked one in front of about 20 family members and friends from Texas. Wesneski retired 13 of the first 14 batters.

Sun 107, Sky 80 – Sun rout Sky 104-80, force Game 5 in semifinals series
DeWanna Bonner and Courtney Williams each scored 19 points to help the Connecticut Sun rout the Chicago Sky 104-80 and force a decisive Game 5 in their WNBA playoff semifinal series. Alyssa Thomas added 17 for Connecticut, which will travel to the second-seeded Sky for the winner-take-all game on Thursday. Connecticut raced out to a 22-6 lead and never looked back. Kahleah Copper scored 16 points and Emma Meesseman added 14 for the Sky.

Aces 97, Storm 92 – Sue Bird’s career ends as Aces top Storm to reach to Finals
Sue Bird’s career came to an end as Chelsea Gray scored 15 of her 31 points in the fourth quarter, and the Las Vegas Aces advanced to the WNBA Finals with a 97-92 win over the Seattle Storm in Game 4 of their semifinal series. The Aces won the best-of-five series 3-1, all the games tense, pressure-packed and filled with spectacular shot-making. The Aces ended up making more, most notably Gray, who made five of six shots down the stretch and scored 12 of the final 20 points for the Aces. It will be the third Finals appearance in franchise history for Las Vegas.

NCAAFB – Georgia moves up to No. 2, passing Ohio State
Georgia moved up to No. 2 in the first Associated Press college football poll of the regular season. The Bulldogs passed Ohio State after the defending national champions dominated their opener. Alabama remained No. 1 in the AP Top 25 presented by Regions Bank, receiving 44 of 63 first-place votes. The Bulldogs narrowed the gap on the Crimson Tide after beating Oregon 49-3. Georgia received 17 first-place votes. Ohio State slipped to No. 3 and received two first-place votes. Michigan moved up four spots to No. 4. Clemson dropped one place to No. 5. Florida debuted at No. 12 after its thrilling victory at home against Utah. The Utes slipped six spots to No. 13 after the loss. Oregon’s loss to Georgia sent the Ducks all the way out of the rankings.

NCAAFB – LSU addressing a slew of miscues after Kelly’s debut
LSU has emerged from Brian Kelly’s coaching debut trying to address a slew of miscues which proved costly in a narrow loss to Florida State. Kelly says receiver Kayshon Boutte is the least of his offense’s concerns despite making just two catches for 20 yards without scoring. He says Boutte has high standards and was unhappy during the game. But Kelly asserts Boutte will have “great games” this season. Kelly cites blocking and special teams among areas needing improvement after LSU struggled to run the ball, muffed two punts and had two kicks blocked. But Kelly says LSU also showed grit and character while nearly erasing a late two-touchdown deficit. The Tigers host Southern on Saturday.

NCAAFB – Big Ten – Big Ten punters just keep turning up from down under
Half of the Big Ten’s 14 teams this season have a punter produced by Prokick Australia. The development academy down under has been supplying major college football programs with game-ready special teamers at a remarkable rate. Purdue’s Jack Ansell, Minnesota’s Mark Crawford, Rutgers’ Adam Korsak, Ohio State’s Jesse Mirco, Illinois’ Hugh Robertson and Iowa’s Tory Taylor are all from Australia. Indiana’s James Evans is a New Zealander. Prokick has landed full scholarships for 190 players and counting. It was founded in 2007 by Nathan Chapman after a brief experience in the NFL.

NFL – Bears release renderings for enclosed suburban stadium
The Chicago Bears plan to build an enclosed suburban stadium that could host Super Bowls, College Football Playoff games and Final Fours. The Bears released conceptual illustrations of the proposed stadium and entertainment complex that would be built on the site of a former horse racing track in Arlington Heights, Illinois. The Bears say the project could include restaurants, office space, a hotel, fitness center, new parks and open areas. They also say they would seek no public funding for the stadium if the sale of the property is completed and if they decide to move there. But they would seek taxpayer assistance for the rest of the project.

NFL – NFL features record-tying 10 new head coaches
There will be a new look on the sideline in Week 1 of the NFL season with a record-tying 10 new head coaches across the league. The overhaul of nearly one-third of the league matches the previous high last reached 2006. The new crop includes five retreads looking to bounce back after getting fired from their last head-coaching job and five first-time coaches. They take over varying situations with Tampa Bay’s Todd Bowles and Las Vegas’ Josh McDaniels taking over 2021 playoff teams in their second chances, while others like Chicago’s Matt Eberflus and Brian Daboll of the Giants in rebuilding situations.

Golf – PGA/LIV – Horschel, Rahm unhappy at LIV golfers playing at Wentworth
Golfers from the Saudi-backed breakaway series have faced strong criticism for choosing to play the BMW PGA Championship on the European tour this week. The main targets of the criticism were those LIV Golf players who are in the field at Wentworth because of their ranking in the top 60 and are seemingly chasing ranking points not currently available on the breakaway tour. Billy Horschel is the defending champion from the United States and called the players in question “hypocrites.” Jon Rahm accused them of displaying double standards.

Tennis – US Open – Khachanov stops Kyrgios in 5 sets; faces Ruud in semifinals
Karen Khachanov has advanced to the first Grand Slam semifinal of his career by edging Nick Kyrgios 7-5, 4-6, 7-5, 6-7 (3), 6-4 at the U.S. Open. Kyrgios could not quite follow up his victory over defending champion Daniil Medvedev. The match began Tuesday night and concluded after midnight on Wednesday at a rowdy Arthur Ashe Stadium. The No. 27-seeded Khachanov will face No. 5 Casper Ruud on Friday for a berth in the championship match.

Tennis – US Open – Garcia, 28, tops Gauff, 18, at US Open for 1st Slam semi
Caroline Garcia has beaten 18-year-old American Coco Gauff 6-3, 6-4 at the U.S. Open to reach her first Grand Slam semifinal at age 28. The 17th-seeded Garcia had lost both of her two previous matches against the 12th-seeded Gauff but was the better player in Arthur Ashe Stadium on Tuesday night. The Frenchwoman stretched her winning streak to 13 matches and solidified her status as someone playing as well as anyone in women’s tennis at the moment. Garcia has not dropped a set at Flushing Meadows this year. She finished last year ranked 74th but is projected to rise into the top 10 next week. Garcia will face Wimbledon runner-up Ons Jabeur next.

USA Soccer – U.S. Soccer, players formally sign equal pay agreements
Representatives for the men’s and women’s U.S. national teams signed their historic collective bargaining agreements with U.S. Soccer, formally closing a long and acrimonious fight over equal pay. The federation announced in May that it had struck separate agreements with the players’ unions on contracts that run through 2028. A signing ceremony was held following the women’s friendly match against Nigeria at Audi Field in Washington D.C., with U.S. Secretary of Labor Marty Walsh among those on hand. The new contracts include identical pay structures for appearances and tournament victories, revenue sharing and equitable distribution of World Cup prize money.

Olympics – Tokyo Olympics sponsorship scandal widens with more arrests
Bribery allegations against a former Tokyo Olympics organizing committee member are widening as Japanese prosecutors “re-arrested” Haruyuki Takahashi in a case involving suspected payments from a publisher which became a sponsor for the Games. The latest allegations center on 76 million yen — about $540,000 — Takahashi received from publishing company Kadokawa, according to Tokyo District prosecutors. Two Kadokawa officials have been arrested for allegedly paying bribes. Takahashi has been in detention since he was arrested last month for receiving bribes from clothing manufacturer Aoki Holdings. He was also formally charged Tuesday with receiving bribes from Aoki. Three Aoki officials were also charged.