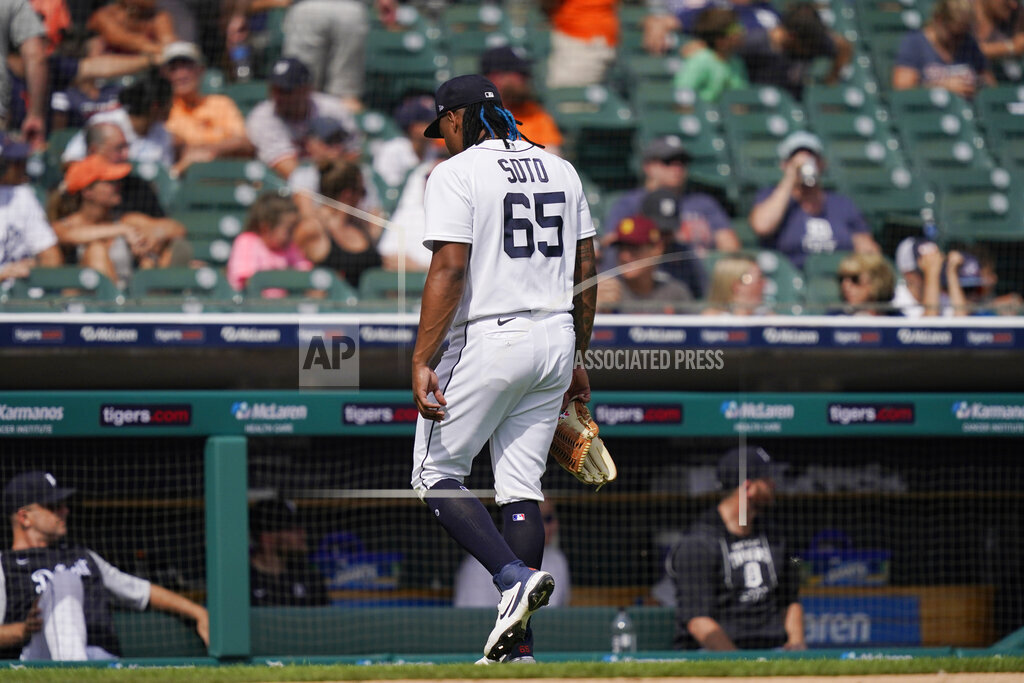 Rays 7, Tigers 0 – Rays draw 2 bases-loaded walks in 9th, beat Tigers 7-0
Yu Chang and Yandy Diaz drew bases-loaded walks in a seven-run ninth inning to help the Tampa Bay Rays beat the Detroit Tigers 7-0. With the game scoreless in the ninth, former Tiger Isaac Parades hit a one-out single off Tigers closer Gregory Soto, then took third on a two-out double by Francisco Mejia. Soto walked Jose Siri to load the bases, then missed on a 3-2 pitch to Chang.Soto walked Diaz, his fourth batter of the inning, to make it 2-0. The Rays walked a franchise-record 13 times while beating the Tigers on Friday.

White Sox 8, Rangers 2 – Chicago pounds out 15 hits, beats Texas 8-2 for series split
Andrew Vaughn had a two-run home run among his three hits, Luis Robert hit a two-run double, and AJ Pollock had two doubles in a three-hit game as the Chicago White Sox beat the Texas Rangers 8-2 to split a four-game series. The Sox had 15 hits, five for extra bases, after being limited to four runs and 13 hits in the previous three games. Nathaniel Lowe hit a solo homer in the seventh inning and delivered an RBI single in the third for the Rangers. The 452-foot homer was the longest by a Rangers player this season.

Marlins 3, Cubs 0 – Marlins hit back-to-back homers, Luzardo beats Cubs 3-0
Jesús Luzardo allowed one hit over seven innings for his first win since April, and Jacob Stallings and Peyton Burdick hit back-to-back home runs as the Miami Marlins beat the Chicago Cubs 3-0 to prevent a three-game sweep. Yan Gomes singled with two outs in the fifth off Luzardo. Nick Madrigal’s leadoff single in the ninth against Tanner Scott was Chicago’s only other hit. Scott then got a groundout and two strikeouts for his 15th save. Charles Leblanc opened the fifth with a double off Adrian Sampson before Stallings put Miami on the board with his third homer of the year. Burdick connected on the next pitch for his first major league home run. It was only Miami’s second victory in nine games.

NASCAR – Kevin Harvick ends 65-race drought with 6th win at Michigan
Kevin Harvick got his groove back, fittingly at one of his favorite tracks. Harvick ended a 65-race winless drought that lasted nearly two years with his sixth victory at Michigan International Speedway on Sunday. The No. 4 Ford pulled away from Bubba Wallace and the rest the field following a restart with 35 laps to go. The Stewart-Haas Racing driver took advantage of clean air, helping him coast to his 59th victory. Wallace finished second in his No. 23 Toyota followed by Denny Hamlin in his No. 11 Toyota.

Sky 94, Sun 91 – Parker, Sky beat Sun 94-91, set franchise’s win record
Candace Parker scored 18 points, grabbed 12 rebounds and tipped a pass to Emma Meesseman for a 3-pointer in the closing seconds to help the Chicago Sky beat the Connecticut Sun 94-91 to set the franchise record for wins in a season. Courtney Vandersloot had 20 points, five assists and four steals for Chicago (25-8). Meesseman and Allie Quigley added 15 points apiece and Kahleah Copper scored 11. DeWanna Bonner converted a four-point play and then found Thomas for a layup to make it 89-all with 43.6 seconds to go but Parker, in the post, tipped a touch-pass out to Meesseman for a wide-open 3-pointer to make it 92-89 with 28.0 seconds remaining and the Sky led the rest of the way.

NCAAHKY – Michigan names Naurato interim coach after Pearson exit
The University of Michigan promoted Brandon Naurato to interim hockey coach for one season on Sunday, two days after cutting ties with coach Mel Pearson following an investigation into the program. An investigation revealed in part that Pearson pressured student-athletes to lie about COVID-19 contact tracing last year. Pearson was 99-64-16 at Michigan over five seasons. Naurato was on Pearson’s staff last season after he was a player development consultant with the Detroit Red Wings for three seasons. He was a forward for the Wolverines and played minor league hockey for four years.

Golf – PGA – Kim arrives on PGA Tour with 61 to win Wyndham Championship
Joohyung Kim is the second-youngest PGA Tour winner since World War II. The 20-year-old South Korean who goes by “Tom” made a name for himself at the Wyndham Championship. Kim shot 61 and captured his first PGA Tour title by five shots. That makes him an instant PGA Tour member and now he’s eligible for the FedEx Cup playoffs that start next week. Rickie Fowler missed the cut but still managed to finish No. 125 in the FedEx Cup to advance. Justin Lower missed his card by three-putting for bogey from long range on the final hole.

Golf – Champions – Kelly wins playoff in Canada for 3rd Champions title of year
Jerry Kelly missed a chance to win in regulation at the Shaw Charity Classic. And then he made short work in overtime by making a 4-foot birdie putt to win. Kelly now has three wins this year on the PGA Tour Champions. That’s tied with Steven Alker for the most this year on the 50-and-older circuit. Alker didn’t play in Canada. He still leads the Charles Schwab Cup standings. Kelly shot a 67, while Huston had a 65. The final round was so tight that five players finished one shot behind. The group included U.S. Senior Open champion Padraig Harrington.

NFL – Browns RB Kareem Hunt practices after demanding trade
Cleveland Browns running back Kareem Hunt participated in team drills for first time in three days after demanding a trade. Hunt is the final year of a two-year, $12 million deal he signed two years ago, but is asking for a long-term extension. The 27-year-old has been productive during his three seasons for Cleveland. But he missed nine games last season with calf and ankle injuries. Hunt’s situation adds more drama for the Browns, who are waiting to see how quarterback long Deshaun Watson will be suspended for violating the NFL’s personal conduct policy. Hunt was not made available to speak with the media.

NCAA – NCAA looking to add “windows” for transfer portal
The NCAA will have a committee conduct more research on a recommendation to allow Division I athletes to switch schools as many times as they want with immediate eligibility. The transfer rule proposals were among several that came out of the NCAA’s Transformation Committee and were moved along by the Division I Council two weeks ago. The board did adopt Transformation Committee recommendations that would allow schools to provide more financial benefits to athletes. The proposed changes to transfer rules also included implementing sport-specific windows when athletes could enter their names in the transfer portal and be immediately eligible the following year.

MHSAA – Fall practice begins today
Today marks the unofficial end of summer vacation for high school student athletes, as practice opens for the upcoming high school sports season.  The MHSAA says that almost 95,000 students will step on the fields around the state of Michigan today to prepare for their first games.  Girls golf and boys tennis will have their first games on August 15, August 17 for boys soccer, cross country, girls swimming and diving, and volleyball.  Football teams will be able to play games on August 25.