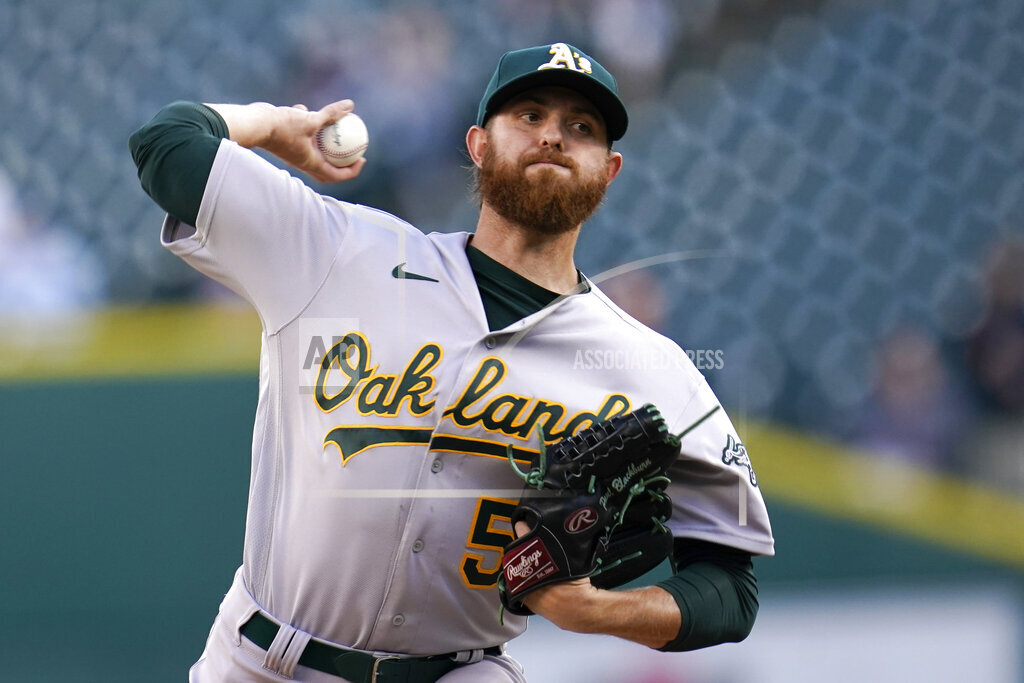 Athletics 2, Tigers 0 – A’s beat Tigers 2-0 as Blackburn improves to 4-0
Paul Blackburn threw 6 2/3 strong innings to improve to 4-0 as the Oakland A’s shutout the Detroit Tigers 2-0 to snap a season-high nine-game losing streak. Tony Kemp hit a solo home run in the third and Chad Pinder added an RBI single in the fourth. Blackburn gave up four hits and struck out three before leaving in the seventh inning. Despite walking two batters, rookie Dany Jiménez escaped damage and earned his fifth save to finish off the four-hitter.

Guardians 12, White Sox 9 – F/11 – Naylor powers big comeback, Guardians stun White Sox in 11
Josh Naylor hit a tying grand slam with two outs in the ninth inning and a three-run homer in the 11th, powering a huge comeback that carried the Cleveland Guardians to a wild 12-9 victory over the Chicago White Sox. Naylor also had a run-scoring double in the eighth and finished with eight RBIs for the Guardians, who stunned Chicago by rallying from an 8-2 deficit in the ninth aided by two White Sox errors. Andrés Giménez led off the inning with a homer and then doubled home a run in the 10th as the Guardians snapped Chicago’s six-game winning streak.

Cubs 6, Padres 0 – Hendricks brilliant for 8 2/3 innings as Cubs snap skid
Kyle Hendricks came within one out of three-hit shutout for the Chicago Cubs, who beat the listless San Diego Padres 6-0 to snap a season-high five-game losing streak. Manager David Ross came out to get Hendricks after he got Jurickson Profar to fly out to left on his 116th pitch. Hendricks struck out rookie José Azocar to open the ninth and walked Jake Cronenworth on six pitches before going to a full count against Profar. Scott Effros came on and retired Manny Machado. Hendricks (2-3) didn’t allow a runner to reach scoring position.

MLB – MLB plans London games in 2023, 2024 and 2026
Major League Baseball plans to play regular-season games in London in 2023, 2024 and 2026. The New York Yankees and Boston Red Sox split two games at London’s Olympic Stadium in June 2019. The St. Louis Cardinals and Chicago Cubs were scheduled to play there in June 2020, but those games were canceled because of the coronavirus pandemic. MLB plans to hold a Home Run Derby at London’s Crystal Palace Park on July 9 this year.

NBA – Suns coach: NBA should consider families-only seats at games
Phoenix Suns coach Monty Williams says the NBA should consider having a special section in the stands reserved for the families of visiting teams in the wake of Chris Paul’s family being harassed during a playoff game in Dallas. The incident happened Sunday during Game 4 of the Western Conference semifinals between the Dallas Mavericks and Suns. The Mavericks said afterward that they were aware of an incident between a fan and Paul’s family at American Airlines Center and that the fan was ejected. Paul tweeted about the incident after it happened but didn’t speak to the media following practice Monday.

NCAAMBKB/NBA – Former NBA, Michigan State star Adreian Payne shot, killed
Former Michigan State basketball standout and NBA player Adreian Payne has died in a shooting. He was 31. The sheriff’s office in Orange County, Florida said deputies responded to a shooting Monday morning when Payne was identified and taken to a hospital where he was pronounced dead. Lawrence Dority was present at the scene, according to the sherriff’s office. The 29-year-old Dority was arrested on a first-degree murder warrant after homicide detectives interviewed him. Payne played in 107 NBA games, averaging four points and three rebounds, over four seasons with the Atlanta Hawks, Minnesota Timberwolves and Orlando Magic.

NHL – Islanders fire coach Barry Trotz after missing playoffs
The New York Islanders have fired coach Barry Trotz after missing the playoffs in his fourth season with the team. General manager Lou Lamoriello made the surprising announcement more than a week after the regular season ended. Trotz coached the Islanders to playoff appearances in each of his first three years with them. They failed to qualify this year after starting the season on a 13-game road trip and enduring a string of coronavirus-related absences and injuries that derailed the season. Trotz had one year left on his contract. He joined the Islanders in 2018 after winning the Stanley Cup with the Washington Capitals.

NCAAFB – NCAA clarifies compensation rules but is crackdown likely?
College sports leaders are trying to send a warning to schools and boosters when it comes to paying athletes for endorsement and sponsorship deals: There are still rules and they will be enforced. The NCAA’s Division I Board of Directors has approved guidance clarifying the types of payments and booster involvement that could be considered recruiting violations. It is not clear whether the NCAA will clamp down on boosters offering money to recruits or whether it will be taken to court over it.

NFL – Mississippi sues Favre, wrestlers, over welfare misspending
The Mississippi Department of Human Services is suing retired NFL quarterback Brett Favre, three former pro wrestlers and several other people and businesses to try to recover millions of misspent welfare dollars that were intended to help some of the poorest people in the nation. The lawsuit was filed Monday. It says the defendants “squandered” more than $20 million in money from the Temporary Assistance for Needy Families anti-poverty program. The suit was filed less than two weeks after a mother and son who ran a nonprofit group and an education company in Mississippi pleaded guilty to state criminal charges tied to the misspending.