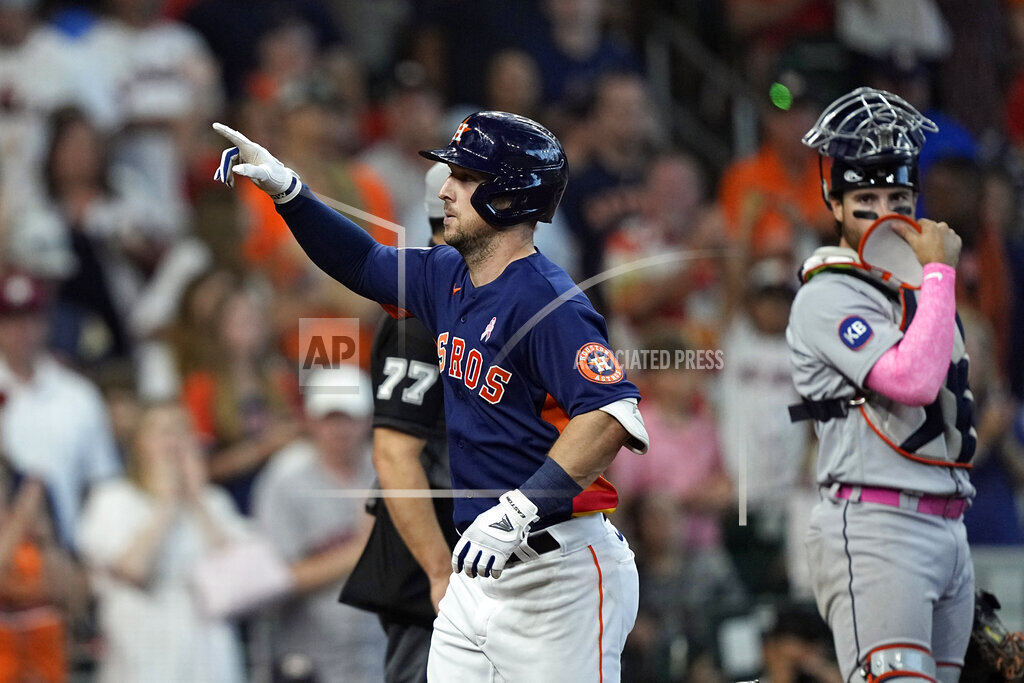 Astros 5, Tigers 0 – Grand slam by Diaz vs. Tigers helps Astros to 7-0 homestand
Aledmys Díaz hit a grand slam, Jake Odorizzi threw five innings of one-hit ball and the Houston Astros beat the Detroit Tigers 5-0 for a four-game sweep and their seventh straight win. Díaz’s second home run of the season came in the third inning on a 92 mph fastball from Tigers reliever Drew Hutchison. It went 347 feet to left-center field, scoring José Altuve, Alex Bregman and Yordan Alvarez for a 4-0 lead. Houston finished a red-hot homestand against Seattle and Detroit 7-0. When the homestand began, they were 11-11.

White Sox 3, Red Sox 2 – Abreu gets 2-run double; White Sox complete sweep over BoSox
Dallas Keuchel halted his three-start losing streak with six solid innings, José Abreu hit a two-run double and the Chicago White Sox beat the Boston Red Sox 3-2 for their season-high sixth straight victory. Leury García added an RBI single for the White Sox, who moved over .500 for the first time since April 20 and completed a 5-0 road trip, including three wins at Fenway Park. Christian Vázquez had an RBI single for Boston, which has lost a season-most five straight and 14 of 18.

Dodgers 7, Cubs 1 – Buehler stars in 100th career start as Dodgers sweep Cubs
Walker Buehler pitched seven sparkling innings in his 100th career start, and the Los Angeles Dodgers beat the sliding Chicago Cubs 7-1 for their sixth consecutive victory. Buehler improved to 3-0 with a 0.43 ERA over his last three outings. The right-hander allowed one run and four hits, struck out six and walked two. Cody Bellinger had three hits for Los Angeles, and Justin Turner and Freddie Freeman each contributed a sacrifice fly. Chicago lost for the 14th time in 17 games. It managed just three runs and 15 hits in the three-game sweep by Los Angeles.

MLB – Cubs scratch RHP Marcus Stroman, put him on IL
The Chicago Cubs scratched Marcus Stroman for their game against the Los Angeles Dodgers, and then lost starter Justin Steele to a left hand injury. Stroman was placed on the injured list without a designation, likely meaning the right-hander was shelved by a COVID-19-related issue. Steele stepped in, making his first appearance since April 30. But he was checked on by manager David Ross and a trainer before the fifth inning, and then walked off the mound after a short conversation.

MLB – White Sox eager for Moncada
The scraped-up White Sox hope third baseman Yoán Moncada can make his season debut when Chicago opens a three-game home series against Cleveland. The 26-year-old Moncada has been out since the last week of spring training with a strained right oblique, one of several key players sidelined for the South Siders this season. The White Sox have won six straight to climb back over .500 for the first time since April 20 despite still missing sluggers Eloy Jiménez and Andrew Vaughn and starter Lance Lynn. Right-hander Michael Kopech will start the opener Monday night against the Guardians’ Zach Plesac.

Sparks 87, Fever 77 – Cambage has 22 points, 11 rebounds; Sparks beat Fever 89-79
Liz Cambage had 22 points on 8-of-11 shooting and grabbed 11 rebounds, Brittney Sykes added 17 points and had five steals and the Los Angeles Sparks beat the Indiana Fever 87-77. Nneka Ogwumike had 13 points, eight rebounds and three steals for Los Angeles (2-0). Chennedy Carter had 12 points, five assists and two blocks, and Jordin Canada scored 10 points with five assists. Destanni Henderson, the No. 20 overall selection in last month’s draft, scored a season-high 19 points for Indiana. Kelsey Mitchell had 15 points and seven assists, NaLyssa Smith had 13 points and nine rebounds. Alanna Smith’s layup made it 64-all with 7 minutes to play but Canada answered with a driving layup to ignite a 10-0 spurt and the Fever trailed the rest of the way.

NASCAR – Logano bumps Byron on next-to-last lap for Darlington win
Joey Logano bumped leader William Byron from behind and into the wall on the next to last lap to win at Darlington Raceway on Sunday. Logano tracked Byron for about 25 laps until running up to his rear bumper, smacking it hard and sending Byron into the wall. Logano went on to his first win of the season and his first ever at the track “Too Tough To Tame.” The victory ended a 40-race winless drought for Logano, who last won on the dirt at Bristol in 2021. Byron fell to 13th and called Logano “an idiot.”

Formula 1 – Verstappen wins inaugural F1 race in Miami
Max Verstappen used an aggressive early pass on Formula One championship leader Charles Leclerc then controlled the inaugural Miami Grand Prix for his third victory of the season.  The reigning world champion started third, but Red Bull quickly got the best of Ferrari for a second consecutive race.  Ferrari settled for second and third for Charles Leclerc and Carlos Sainz Jr.

Golf – PGA – Homa rallies for fourth career PGA win
Max Homa now has four career PGA wins, with half of those coming in the Wells Fargo Championship.  Homa turned a two-stroke deficit into a two-shot win over Keegan Bradley near Washington, D.C. It comes three years after he won the Wells Fargo title at Quail Hollow. The tournament was moved to Maryland this year while Quail Hollow prepares to host the Presidents Cup in September.  A two-shot swing on the 15th hole gave Homa a three-shot lead. He closed with a 2-under 68 for an 8-under total in his second win of the season.

Golf – Champions – Flesch wins at Sugarloaf again
Steve Flesch rallied from four shots behind with a 7-under 65 for a one-shot victory in the Mitsubishi Electric Classic, his second title at the TPC Sugarloaf.  Flesch also won this tournament in 2018, his only other win on the PGA Tour Champions.  David Toms had a two-shot lead on the back nine when he missed a 6-foot birdie putt on the 13th and then a 6-footer for par on the 14th.

Horse Racing – Rich Strike’s team considering Preakness options after upset
The celebration after Rich Strike’s stunning Kentucky Derby upset continued long into the night. The 80-1 longshot has the sports world buzzing. Next up is for Rich Strike’s trainer Eric Reed and the rest of his chestnut colt’s team to decide whether the storybook journey continues at the 147th Preakness on May 21 in Baltimore. Similar decisions also loom for the favorites whom Rich Strike surged past for the improbable win at Churchill Downs.