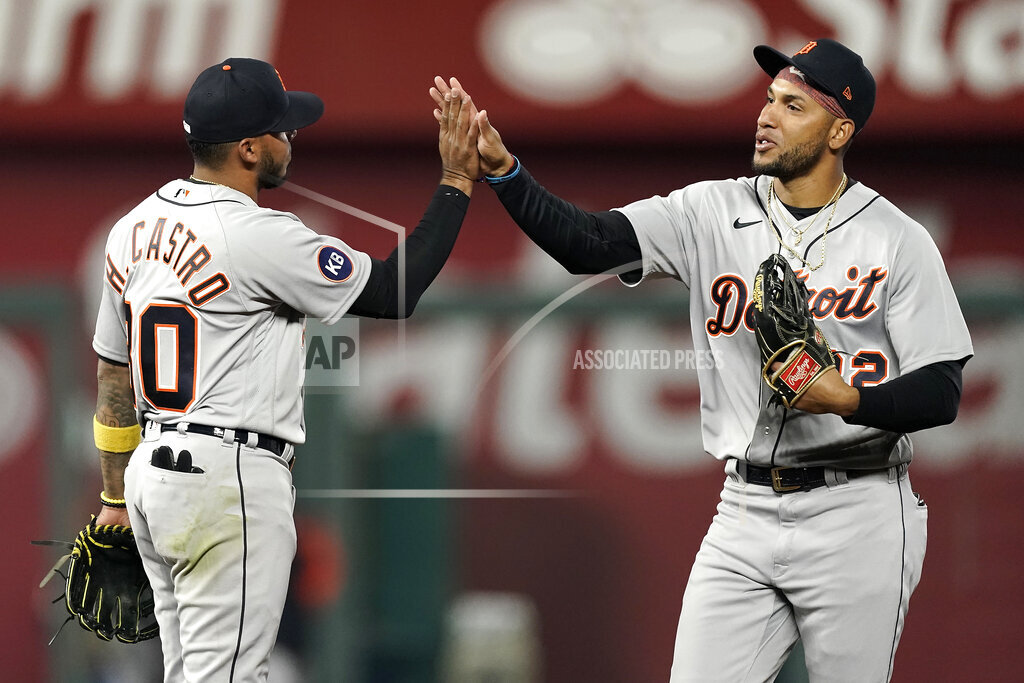 Tigers 4, Royals 2 – Reyes, Meadows drive in runs in 7th, Tigers beat Royals 4-2
Victor Reyes and Austin Meadows had RBI singles in the seventh inning, and the Detroit Tigers beat the Kansas City Royals 4-2. With the game tied 2-2, pinch-hitter Eric Haase hit the first of three straight two-out singles off reliever Jake Brentz, followed by Reyes and Meadows. Miguel Cabrera had three of the Tigers’ nine hits, leaving him six shy of 3,000 for his career. All of Detroit’s hits were singles. Joe Jimenez pitched a scoreless sixth, one of four Tigers relievers who combined to allow only one walk among the final 13 Kansas City batters. Gregory Soto worked the ninth for his second save.

Mariners 5, White Sox 1 – Popups become adventures as Mariners beat White Sox 5-1
Jared Kelenic hit a two-run homer off the right-field foul pole in the second inning, and the Seattle Mariners stopped a four-game losing streak with a 5-1 victory over the Chicago White Sox on a windy Thursday when popups became adventures. Chicago scored in the fifth after Adam Engel’s two-out popup was blown from the middle of the infield into foul territory behind third base. Engel reached second when his popup to the first-base side kicked off the mitt of catcher Cal Raleigh for an error. Jake Burger followed with a popup that fell for an RBI single.

Cubs 5, Rockies 2 – Suzuki extends hit streak to 6, Cubs down Bryant, Rox 5-2
Seiya Suzuki stayed hot with an RBI double in a three-run first inning, Frank Schwindel homered and drove in two, and the Chicago Cubs beat the Colorado Rockies 5-2. Suzuki extended his hitting streak to six games since joining the majors from Japan and drove in his 10th run when the Cubs collected five straight hits against Kyle Freeland. Kris Bryant went 2 for 5 as the Rockies had their four-game winning streak snapped in the opener of Bryant’s second series against his former team. Bryant was traded by the Cubs to San Francisco last season and signed with the Rockies after the lockout.

Red Wings 3, Hurricanes 0 – Nedeljkovic shuts out former team, Red Wings top Hurricanes
Alex Nedeljkovic had 46 saves in a sharp performance against his former team, helping the Detroit Red Wings beat the Carolina Hurricanes 3-0 on Thursday night. Moritz Seider, Adam Erne and Filip Zadina scored for Detroit. The Red Wings were recently eliminated from the postseason chase for the sixth straight year, but managed to push past the Metropolitan Division-leading Hurricanes despite being outplayed much of the way. Nedeljkovic had a strong run for the Hurricanes last season but the team traded him to Detroit in July and opted to reshape their goaltender position by bringing in Antti Raanta and Frederik Andersen. Nedeljkovic had his third shutout of the season.

Blackhawks 5, Sharks 4 – SO – Blackhawks top Sharks 5-4 in SO to end 8-game slide
Alex DeBrincat scored the lone goal in the shootout after having three assists in regulation and the Chicago Blackhawks snapped an eight-game losing streak with a 5-4 win over the San Jose Sharks. Jaycob Megna scored with 3:25 left in the third to tie it at 4 and send it to overtime. Patrick Kane scored his 24th goal and added two assists for Chicago. Dylan Strome notched his career-high 21st goal and had an assist and Taylor Raddysh and Calvin de Haan scored. Meier scored his team-leading 32nd goal for the Sharks, who have lost eight in a row. Scott Reedy and Rudolfs Balcers also scored for San Jose.

NFL – Lions sign former Ravens safety DeShon Elliott
The Detroit Lions have signed safety DeShon Elliott to a one-year contract. Detroit announced the move Thursday, potentially adding a starter in the secondary. The Lions are hoping Elliott’s injuries are behind him. He missed 10 games last season with a torn biceps’pectoral injury and also missed his entire rookie year in 2018 with the Baltimore Ravens. Elliott started in all 16 games during the 2020 season and all six he played in last year. He has 106 career tackles, including 3 1/2 sacks, two forced fumbles, and an interception. Baltimore drafted the former Texas standout in the sixth round four years ago.

USFL – New USFL hoping to succeed where other spring leagues failed
The USFL kicks off Saturday night in Birmingham, Alabama, when the New Jersey Generals face the Birmingham Stallions. Fox and NBC Sports will each carry 22 games, including Saturday’s opener. It’s the first time since the 2007 regular-season finale between the New England Patriots and New York Giants that a game will air on more than one broadcast network. Fox Sports owns the USFL and is making a $150 million investment over three years. The only similarity between the USFL of the 1980s and this one is the team names.

NCAAFB – Michigan State searching for Walker replacements this spring
Michigan State leaned on Kenneth Walker III a lot during its turnaround season, handing him the ball 22 times a game with a much success. This spring and in the fall someone else will need to run the ball for the Spartans because Walker skipped his senior season to enter the NFL draft. The top candidates for the role may be a mystery until the season starts Sept. 2 against Western Michigan. The lack of healthy offensive linemen has led coach Mel Tucker choosing to have a practice instead of a game Saturday at Spartan Stadium.