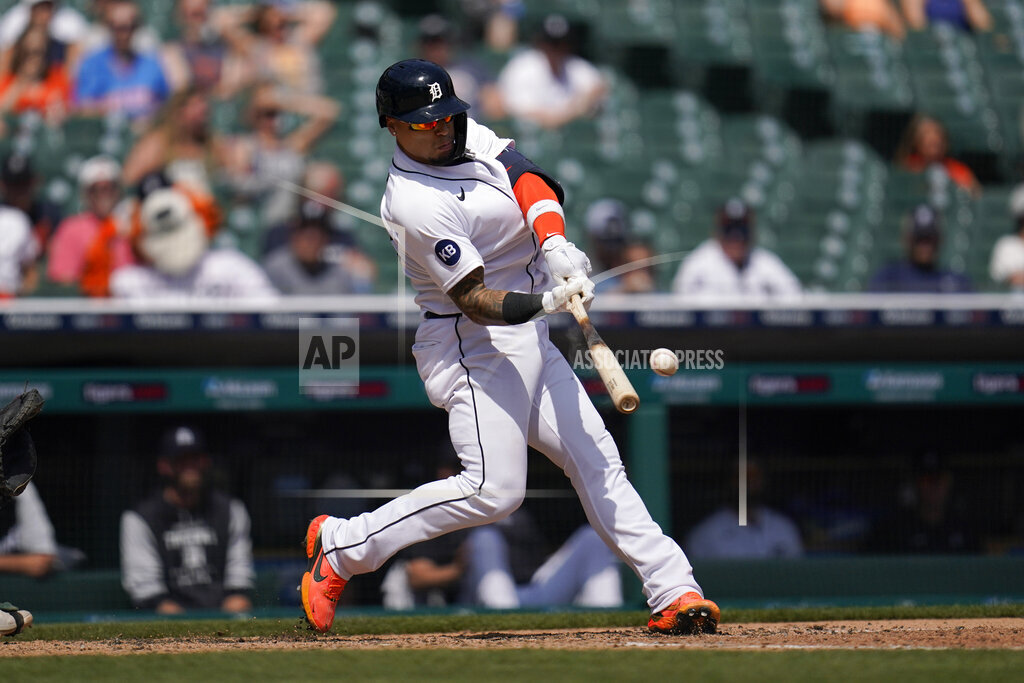 Tigers 6, A’s 0 / A’s 4, Tigers 1 – Road teams sweep unusual A’s-Tigers doubleheader
Tarik Skubal led the Tigers to a 6-0 win over Oakland as the visiting team in the opener of a unique doubleheader caused by Major League Baseball’s lockout. With the Athletics as the visiting team in the second game, 25-year-old Adrian Martinez (1-0) pitched 5 1/3 scoreless innings in his major league debut to help Oakland to a 4-1 victory. In a matchup of last-place teams, Detroit ended a 27-inning scoreless streak in the opener. Oakland (12-19) then won for the second time in 12 games and sent the Tigers (9-21) to their seventh loss in eight games.

Padres 5, Cubs 4 – Machado, Padres beat Cubs 5-4 in Clevinger’s return
Manny Machado hit a go-ahead double in the sixth inning and the San Diego Padres beat the Chicago Cubs 5-4 hours after finding out manager Bob Melvin will have prostate surgery. Melvin announced before the game that he’ll have surgery Wednesday. He said he doesn’t think he has cancer, “but they won’t know until they get in there.” Mike Clevinger pitched well for 4 1/3 innings in his first start at Petco Park since late in the 2020 season. He missed last season while rehabbing after Tommy John surgery. Chicago’s Wade Miley lasted three innings in his Cubs debut.

MLB – Cubs’ Rivas gets HR when ball bounces out of rookie’s glove
Alfonso Rivas of the Chicago Cubs got a two-run homer when his fly ball to deep center field bounced out of the glove of rookie Jose Azocar and went over the fence.Azocar was starting in place of Gold Glove center fielder Trent Grisham because the Padres were facing lefty Wade Miley. Azocar slumped to the ground in disappointment after the play. Rivas grew up in nearby Chula Vista and went to La Jolla Country Day. His homer tied the game at 2 in the third inning. It was his second and came off Mike Clevinger, who made his first start in San Diego since Sept. 23, 2020..

MLB – White Sox’s Jiménez making quick strides from torn hamstring
Chicago White Sox outfielder Eloy Jiménez says he is making quick strides in his recovery from a torn hamstring. Jiménez says he is coming along sooner than expected. He is pain free and has been running and swinging. Jiménez was injured trying to beat out a grounder at Minnesota on April 23. The 25-year-old slugger felt it as he was running toward the base. He then stretched for the bag, stumbled and was taken from the field on a cart. Jiménez had surgery a few days later, and the White Sox said he would be out six to eight weeks.

MLB – Anderson suspension dropped in MLB settlement, fine remains
Major League Baseball dropped the one-game suspension of Chicago White Sox shortstop Tim Anderson for giving fans the middle finger during a game on April 20 as part of a settlement with the players’ association. He agreed to a fine as part of the settlement, which avoided an appeal before MLB special adviser John McHale Jr. Anderson had three errors in the first two innings of Chicago’s 11-1 loss in the opener of a doubleheader and made the gesture toward a fan while out in the field. MLB senior vice president Michael Hill announced the suspension two days later.

NBA – Spurs owner insists NBA team will stay in San Antonio
San Antonio Spurs owner Peter J. Holt sent a message Tuesday to fans worried he may try to move the franchise: the team isn’t going anywhere. An announced desire to have the Spurs move a few games to Austin had raised some local worries that the owners may be considering moving the team. Holt’s message posted to social media insisted the Spurs would stay in San Antonio.

NBA – Bob Lanier, NBA force who left big shoes to fill, dies at 73
Basketball big man Bob Lanier has died after a short illness. He was 73. Lanier was one of the NBA’s top players of the 1970s, muscling up beside the likes of Kareem Abdul-Jabbar. Lanier played 14 seasons with the Detroit Pistons and Milwaukee Bucks. The left-hander averaged more than 20 points and 10 rebounds. He was the No. 1 draft pick in 1970 after leading St. Bonaventure to the Final Four. In 1992, he made the Hall of Fame, where a bronzed pair of his giant sneakers is displayed.

NHL – Canadiens win NHL draft lottery; Devils move up to No. 2
The Montreal Canadiens are hosting the NHL draft in July and will have the right to the No. 1 pick. Montreal won the draft lottery on Tuesday night. It follows a turbulent season in which they finished last in the overall standings. The New Jersey Devils shook up the draft order by winning the second of two lottery drawings and moving from the fifth to second slot in the draft order. Montreal will host this year’s event on July 7 and 8. It ends a long wait after the draft was held remotely due to the coronavirus pandemic in each of the past two years.  The Red Wings will pick 8th, while the Blackhawks had the 6th pick, but it was traded last year in the deal for Seth Jones.

Fever 82, Lynx 76 – Indiana snaps 6-game losing streak against Minnesota
Kelsey Mitchell scored 26 points, Crystal Dangerfield had 10 points and six assists against her former team and the Indiana Fever beat the Minnesota Lynx 82-76 to snap a six-game losing streak in the series. Dangerfield, who was waived by Minnesota a week ago, made a jumper from the free throw line to extend Indiana’s lead to 76-72 with 2:26 left and added two free throws at 18.9 to seal it. Dangerfield, the 2020 rookie of the year, was 3 of 7 from the field in 21 minutes. Rookie NaLyssa Smith added nine points for Indiana. Sylvia Fowles had 26 points and 14 rebounds to lead Minnesota.

NFL – Tom Brady to join Fox Sports when playing career ends
Tom Brady will join Fox Sports as a football announcer when his playing career ends. That announcement was made Tuesday by Fox Corp. CEO Lachlan Murdoch on an investor call. Brady had announced his retirement at the end of last season, but later renounced it and said he was going to play at least another season as the Tampa Bay Bucs quarterback. Signing the seven-time Super Bowl champion was a coup for Fox after its top football announcing team, Joe Buck and Troy Aikman, recently left for ESPN. Murdoch says it’s up to Brady when he decides to retire.

NFL – Slime Time: Nickelodeon to broadcast Christmas Day NFL game
The NFL game on Christmas Day between the Broncos and Rams will be broadcast by Nickelodeon. The network, which previously televised two playoff games, and CBS will handle TV duties on Dec. 25 at 4:30 p.m. EST. The Super Bowl champion Rams will host the game, which also will be streamed by Paramount+. Nickelodeon has had success with its youth-oriented telecasts during wild-card weekend alongside the NFL broadcast on CBS. This season, that collaboration will shift to the regular season and Christmas Day. It’s expected to be part of a holiday tripleheader.

NCAA – NIL expert predicts $50,000 minimum pay for Power 5 players
College football and men’s basketball players on scholarship in one of the major conferences can expect to soon earn a minimum of $50,000 each year he plays because of the influx of cash from booster collectives brokering name, image and likeness deals. That prediction comes from Blake Lawrence. He’s co-founder and CEO of Opendorse, a company that helps athletes and schools navigate the NIL landscape.

Indy 500 – Sarah Fisher selected as Indy 500 celebrity pace car driver
IndyCar veteran Sarah Fisher has been selected as the celebrity pace car driver for this month’s Indianapolis 500. Fisher has been the regular pace-car driver for series events at Indianapolis Motor Speedway for years. This time she won’t be taking the handoff from some high-profile non-racing veteran. Instead she’ll be in the car for the entire May 29 race. She will drive the 670-horsepower 2023 Chevrolet Corvette Z06 70th- year anniversary edition, the automobile manufacturer announced. Fisher made nine 500 starts in her career and was the first female to win an IndyCar pole.

Boxing – No charges for Mike Tyson for punching airplane passenger
Authorities will not file criminal charges against former heavyweight champ Mike Tyson after he was recorded on video punching a fellow first-class passenger aboard a plane at San Francisco International Airport last month. The San Mateo County District Attorney’s Office says Tuesday that it closed the case. The victim and Tyson requested that charges not be filed. The video shows Tyson repeatedly striking the unidentified man in the head, drawing blood. The footage was first shared by TMZ, which said it was recorded on a JetBlue Airways plane bound for Florida. Tyson representatives have said the boxer was on a flight with an aggressive passenger.

MILB – MLB wage settlements
Minor league players and Major League Baseball have reached a settlement in a lawsuit alleging teams violated minimum wage laws. Two people familiar with the negotiations told The Associated Press that the sides in recent weeks had been discussing a possible settlement in the $200 million range. The suit had been scheduled for a trial starting June 1 in San Francisco.