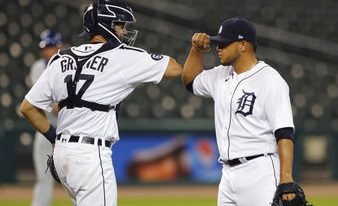 The Michigan High School Athletic Association announced yesterday the next steps in returning sports for member schools, adopting a plan to phase in competition for fall sports. As of now, lower-risk sports such as cross country, girls golf, boys tennis, and girls swimming & diving – may begin practice on Aug. 12 and begin competition on their traditional start dates of Aug. 19 and 21. Moderate and high-risk sports, such as football, volleyball, and boys’ soccer may begin practice but not competition. Decisions about competition timelines for those three sports will be made by Aug. 20.

The White Sox scored four times in the ninth 9th inning to beat Cleveland 4-0. Rookie Luis Robert hit a two-run single in the 9th as Chicago snapped a three-game losing streak.
The Sox have today off.

The Cubs lost to Cincinnati 12-7 as Mike Moustakas and Nick Senzel homered for the Reds in their returns from a COVID-19 scare. Nick Castellanos added a grand slam for Cincinnati.
Tonight – Cubs (Yu Darvish) at Cincinnati (Luis Castillo), 6:10

Major League Baseball announced that LA reliever Joe Kelly was hit with an eight-game suspension for brushing back Alex Bregman near the head and taunting Carlos Correa in Tuesday’s game. The game marked the first time the teams had met since it was revealed Houston stole signs en route to a 2017 World Series title over the Dodgers. LA manager Dave Roberts was suspended for Wednesday’s game and Astros manager Dusty Baker was fined. Kelly elected to appeal and can continue to play.

Notre Dame will play in the Atlantic Coast Conference this season as part of a plan to play 10 league games and start the week of Sept. 7. The ACC’s university presidents approved the plan for an 11-game schedule, including one nonconference game, and for pushing back the league championship game from Dec. 5 to either Dec. 12 or 19. Notre Dame will play in a football conference for the first time in the 133-year history of the program if the season is played.

The Big West Conference is postponing all fall sports through the end of the calendar year. The conference will determine later if conducting fall sports in the spring would be feasible. The decision does not impact basketball, which is scheduled to begin on Nov. 10. The Division I conference has 11 members, with all but one based in California.

Chicago Bears starting defensive lineman Eddie Goldman plans to opt out of the 2020 season due to health concerns related to the coronavirus. Goldman, 26, has started 63 games for the Bears over the past five seasons and is one of the team’s best run-stoppers.
Elsewhere, Kansas City running back Damien Williams, Dallas cornerback Maurice Canady and undrafted rookie receiver Stephen Guidry, New England linebacker Dont’a Hightower, tackle Marcus Cannon and fullback Danny Vitale, NY Giants left tackle Nate Solder, and Denver guard Drew Forbes and tackle Drake Dorbeck have all chosen to opt out of the season as well because of coronavirus concerns.

Virginia Tech star cornerback Caleb Farley says he will not play for the Hokies if there is a season, becoming the most notable major-college football player to opt out because of concerns about the coronavirus. Farley is considered one of the nation’s top defensive backs. He said he’s forgoing the season “due to uncertain health conditions and regulations and all the other opt-outs going on in football right now.”

Lou Henson, the basketball coach who led Illinois back into the national spotlight, has died at age 88. The school says Henson died Saturday and was buried on Wednesday. In 21 seasons at Illinois, Henson won a school-record 423 games and took his 1989 Illini team to the Final Four. In all, he was 779-412 and the winningest coach at both Illinois and New Mexico State. Henson was named to the National Collegiate Basketball Hall of Fame in 2015.

The Detroit Pistons have agreed to buy the Northern Arizona Suns. The NBA G League team is expected to begin playing in Detroit in 2021-22. A new arena for the team is being constructed on the campus of Wayne State University in Detroit. The Pistons also said they’re soliciting ideas for the team’s new name. The Pistons’ hybrid affiliation with the Grand Rapids Drive will continue through the 2020-21 G League season. The Phoenix Suns will continue to operate the Northern Arizona team for another season.

The USGA says no fans will be allowed at the US Open at Winged Foot in New York on Sept. 17-20. The USGA says the decision was based on health and safety concerns from the COVID-19 pandemic. The U.S. Open already has been moved from its traditional Father’s Day finish. And because of the pandemic, more than 100 qualifiers had to be scrapped for an all-exempt field. Now it comes down to the Masters in November to see if any of golf’s majors will have fans. The PGA Championship next week will be spectator-free.