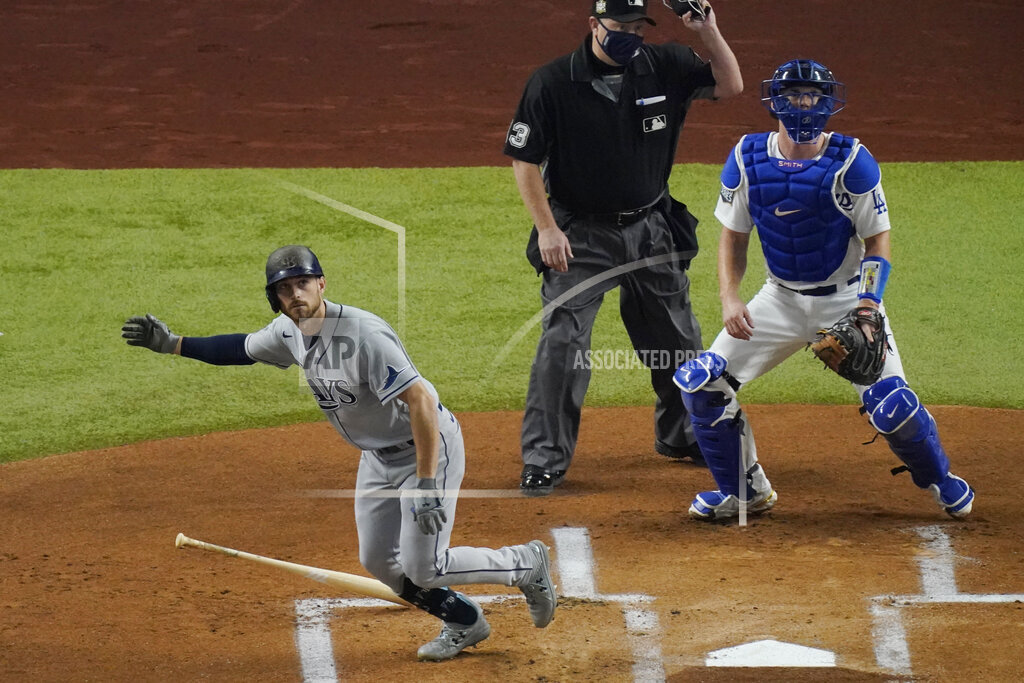 Rays 6, Dodgers 4 – Rays square series
The World Series is tied at a game apiece after Brandon Lowe broke out of a three-week slump.  Lowe homered twice and had three RBIs as the Rays downed the Dodgers, 6-4. He put the Rays ahead with a first-inning blast and added a two-run shot that made it 5-0 in the fifth. Lowe was hitting just .107 this postseason, including an 0-for-4 performance in Game 1. Joey Wendle laced a two-run double and a sacrifice fly for Tampa Bay, which bounced back from Tuesday’s 8-3 loss. Rays starting pitcher Blake Snell had a no-hitter until Chris Taylor unloaded a two-out, two-run homer in the bottom of the fifth. Snell followed that with a walk and another hit before leaving the game without a chance to pick up the victory. Will Smith hit a solo homer in the sixth and Corey Seager did likewise in the eighth before the Rays’ bullpen closed it out. Diego Castillo struck out the only batter he faced to pick up the save. Tony Gonsolin took the loss. The series continues Friday.

NFL – NFC “Least” leader could come out of Giants-Eagles game
It’s so fitting to call the NFC East the NFC Least this season. Just adding an L to the division makes sense: Dallas, Washington, Philadelphia and the New York Giants have been collecting losses. On Thursday night, the nation will be treated to (subjected to?) Giants at Eagles. In some ways, it is a potential battle for first place in the NFL’s worst division. With the Cowboys and Washington going at it on Sunday, the winner at the Linc has a shot at the top spot should Dallas lose.

NFL – Buffalo Bills apply to trademark fan base’s Mafia nickname
The Mafia is becoming legitimate in Buffalo — the Bills Mafia that is. The NFL team last week filed an application to trademark its fan base’s adopted nickname in preparation to launch a series of branded merchandise and apparel available at its store and sold online. The nickname first became popular in 2011 and for years was considered taboo by the Bills and NFL because of its connotation of organized crime. Now, the phrase will be featured on everything from T-shirts to potentially pajamas, and available as early as this week.

NBA – Stan Van Gundy agrees to become New Orleans Pelicans’ coach
Stan Van Gundy has agreed to become the next coach of the New Orleans Pelicans, where he’ll get the chance to work with 2019 No. 1 overall draft pick Zion Williamson. Van Gundy agreed to a four-year contract, said to a person who spoke Wednesday to The Associated Press on condition of anonymity because the contract terms have not been formally announced.  Van Gundy spent parts of 12 seasons coaching Miami, Orlando and Detroit, winning 58% of his games and going to the playoffs eight times.

NCAA Football – Crunch time for Harbaugh and Wolverines
The game of the week in the Big Ten has No. 18 Michigan at No. 21 Minnesota on Saturday. The Wolverines’ last four seasons have ended with consecutive losses and fans are getting antsy as Jim Harbaugh enters his sixth year. Michigan is breaking in a new quarterback, presumably Joe Milton, in the Little Brown Jug game. Iowa will have a new quarterback for the first time in four years, with Spencer Petras making his starting debut on the road against Purdue. No. 5 Ohio State is a 26-point favorite for its home game against Nebraska.

NCAA Football – LSU working with NCAA to self-impose penalties for football
LSU has self-imposed penalties for NCAA rules violations by the football program that include a reduction of scholarships and a two-year ban from its athletic facilities for Cleveland Browns star and former Tigers receiver Odell Beckham Jr., according to a report by Sports Illustrated. LSU acknowledged it was working the NCAA and had self-imposed penalties, but provided no other details. The violation involving Beckham, who was seen handing out cash to LSU players on the field after last year’s College Football Playoff national championship game, is considered minor. A more serious violation involves an LSU booster paying $180,000 that was embezzled from a charity to the father of a former LSU football player.

NCAA – Merritt Norvell, first Black AD at Michigan State, has died
Merritt Norvell Jr., the first Black athletic director at Michigan State, has died. He was 79. A spokesman at the University of Nevada confirmed Wednesday that football coach Jay Norvell, who is Merritt Norvell’s son, took some time away from the team because of his father’s death. He left Reno on Monday to go to Michigan and was expected back either Wednesday night or Thursday morning. Norvell was appointed to Michigan State’s AD spot in 1995 and served until 1999. Michigan State reached the Final Four in volleyball, hockey and men’s basketball during his tenure. Norvell graduated Wisconsin in 1963 after playing on the team that reached that year’s Rose Bowl.

NCAA Basketball – Penn State coach Pat Chambers resigns after investigation
Pat Chambers resigned as Penn State’s basketball coach Wednesday following an internal investigation by the school into allegations of inappropriate conduct. The 49-year-old Chambers had been at the school for nine years and was coming off the team’s best season under his directions. Penn State athletic director Sandy Barbour said in a statement that assistant coach Jim Ferry was being elevated to interim coach for the coming season. NCAA basketball season starts Nov. 25.

NASCAR – Jones lands iconic No. 43 with RPM
Richard Petty Motorsports will enter the next chapter of its storied history with driver Erik Jones. The pairing gives Petty a proven winner to replace Bubba Wallace, who is leaving at the end of the season. His departure could have crippled the cash-strapped Petty organization, but the team instead landed one of the top available talents. Jones was dropped by megateam Joe Gibbs Racing in August after six seasons.