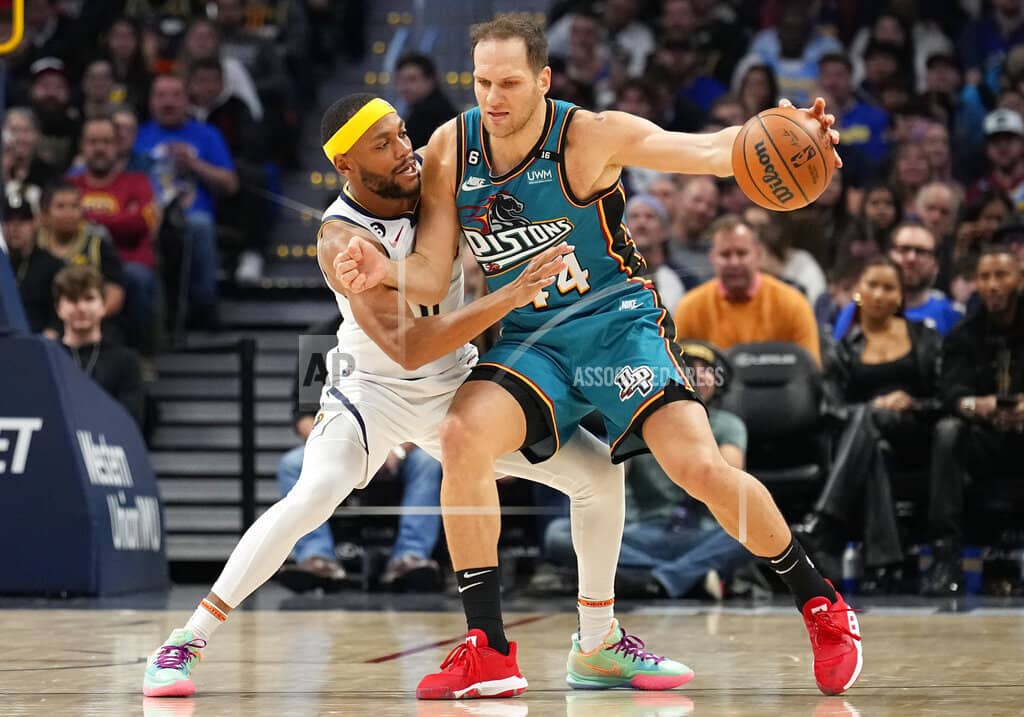 Pistons 110, Nuggets 108 – Pistons snap seven-game skid with 110-108 win over Nuggets
Bojan Bogdanovic scored 22 points and the Detroit Pistons snapped a seven-game losing streak with a 110-108 win over the Denver Nuggets on Tuesday night. The victory was the Pistons’ first on the road this season, as they had lost their previous 10. Detroit entered the night with a league-worst record of 3-15. Former University of Colorado standout Alec Burks finished with 21 points for the Pistons, seven of which came in the fourth quarter. After missing the past three games while in the NBA’s COVID-19 protocols, Denver center Nikola Jokic had 31 points, 10 assists and nine rebounds, putting him just shy of his fourth triple-double of the season. Jokic’s playing status was uncertain in the hours leading up to tip-off.

Notre Dame 82, Bowling Green 66 – Starling leads second-half rally for Irish in 82-66 win
Freshman JJ Starling scored 14 of his 23 points in the second half, Nate Laszewski had 22 and Notre Dame pulled way in the final 10 minutes to beat Bowling Green 82-66. Starling eclipsed his previous career high of 17 in his young collegiate career, hitting 10 of 11 shots, all but one inside the arc. He gave the Fighting Irish their final lead with 9 1/2 minutes remaining with a bucket, scoring eight points in a 23-4 game-ending run. Freshman Ven-Allen Lubin added 12 points and Dane Goodwin 11 for Notre Dame. Samari Curtis led the Falcons with 14 points.

NCAAMBKB – NCAA awards Final Four to Las Vegas for first time
The Final Four is headed to Las Vegas for the first time. The NCAA has awarded the men’s national semifinals and championship game to Allegiant Stadium for the 2027-28 season. The NCAA also announced that Ford Field in Detroit would host the Final Four in 2027, while Lucas Oil Stadium in Indianapolis would get the 2029 event and AT&T Stadium in Dallas would get the 2030 event. The national championship this season will be decided at NRG Stadium in Houston, while State Farm Stadium in Phoenix, the Alamodome in San Antonio and Lucas Oil Stadium already had been chosen for the next three.

NCAAFB – Revenge game: Ohio State tired of living with Michigan loss
Make no mistake, Ohio State is hungry for revenge against Michigan. This year’s version of The Game has huge conference and national championship implications, but at the heart of it the Buckeyes want to extract repayment from Michigan for last year’s game. The 42-27 win by the Wolverines in Ann Arbor snapped Ohio State’s streak of eight wins in the rivalry series and spoiled its hopes for another Big Ten title and berth in the College Football Playoff. Both No. 2 Ohio State and No. 3 Michigan come into the The Game unbeaten for the first time since 2006.

NCAAFB – LSU, USC move up behind UGA, Ohio St, Michigan, TCU in CFP
LSU has moved up to fifth and Southern California is sixth in the College Football Playoff rankings behind Georgia, Ohio State, Michigan and TCU. The top four remained the same for the third straight week, but the teams chasing changed order after Tennessee lost to South Carolina last Saturday night. Two huge games this weekend could create more clarity. Michigan is at Ohio State and USC hosts Notre Dame, which checked in at 15th in the selection committee’s rankings.

NCAAFB – Jury: NCAA not to blame in ex-USC football player’s death
A Los Angeles jury has rejected a claim by the widow of a former USC football player who said the NCAA failed to protect him from repeated head trauma that led to his death. The jury found Tuesday that the NCAA was not negligent in the death of Matthew Gee. Lawyers for the widow of Gee, a linebacker on the 1990 Rose Bowl-winning squad, say he endured an estimated 6,000 hits as a college athlete. They say this caused permanent brain damage and led to cocaine and alcohol abuse, which eventually killed him at age 49. The NCAA said it had nothing to do with his death.

MLB – Verlander, Pujols voted Comeback Players of the Year
Houston Astros ace Justin Verlander and St. Louis Cardinals slugger Albert Pujols have won baseball’s Comeback Player of the Year awards. Verlander, the American League recipient, returned from Tommy John surgery to lead Houston to its second World Series championship. He had the lowest ERA in the majors and was a unanimous winner of his third Cy Young Award — becoming the first player to earn the prize after not pitching in the previous season. Pujols, honored in the National League, came back to St. Louis for his final season and posted his biggest numbers in years at age 42. The three-time MVP compiled an .895 OPS for the NL Central champions and became the fourth major leaguer to reach 700 career home runs.

NCAAHKY – Michigan St hockey player alleges opponent used racial slur
Michigan State hockey player Jagger Joshua has alleged an opponent from Ohio State directed a racial slur at him during a game. Jagger, who is Black, shared his experience on social media from the Nov. 11 game. Jagger said an official heard what the opposing player said, and gave him a game misconduct penalty. The box score that day shows Ohio State senior forward Kamil Sadlocha was the only player given a game misconduct. Ohio State athletic director Gene Smith says Sadlocha is away from the team and will not practice or compete.

Saudi Arabia 2, Argentina 1 – World Cup stunner: Saudi Arabia beats Messi’s Argentina 2-1
Saudi Arabia scored one of the biggest World Cup upsets ever by beating an Argentina team led by Lionel Messi 2-1. Messi’s quest to win the one major title to elude him got off to a shocking start and brought back memories of Cameroon’s 1-0 win over an Argentina team led by Diego Maradona in the opening game of the 1990 World Cup. Goals by Saleh Alshehri and Salem Aldawsari in a five-minute span in the second half gave the Saudis their greatest win. Messi stood with his hands on his hips near the center circle and looking stone-faced as Saudi Arabia’s jubilant players ran in all directions around him.

Mexico 0, Poland 0 – Draw – Mexico and Poland play out 0-0 draw at World Cup
Robert Lewandowski’s second-half penalty attempt was saved by Mexico goalkeeper Guillermo Ochoa and left Poland to settle for a 0-0 draw at the World Cup. Poland’s all-time leading scorer with 76 goals remains without one at the World Cup. The Poland forward was awarded the penalty following a VAR review after Hector Moreno got hold of his shirt and pulled him down. Ochoa came up yelling in celebration after his stop. Mexico dominated possession but Poland goalkeeper Wojciech Szczesny turned away all three of El Tri’s shots on goal.

Tunisia 0, Denmark 0 – Draw – Tunisia holds Denmark 0-0 as Arab teams impress at World Cup
Tunisia held European Championship semifinalist Denmark to a 0-0 draw at the World Cup. The result came three hours after Saudi Arabia beat Argentina in a shocking upset and before a stadium filled almost entirely with Tunisia supporters in another big result for Arab nations competing at the first World Cup in the Middle East. An expert save shortly before halftime by goalkeeper Kasper Schmeichel helped Denmark preserve the draw. The match marked Christian Eriksen’s return to a major tournament less than a year and a half after his cardiac arrest at Euro 2020.

France 4, Australia 1 – Giroud, Mbappe help France beat Australia 4-1 at World Cup
France showed it can cope without its star striker at the World Cup. Kylian Mbappe scored one and set up the second of Olivier Giroud’s two goals to help the defending champions beat Australia 4-1. Giroud equaled Thierry Henry’s national record of 51 goals with a header from Mbappe’s cross. Mbappe headed in a cross moments earlier. He knelt with one hand behind his back and his finger on his forehead in a new celebration. Craig Goodwin gave Australia the lead in the ninth minute. Adrien Rabiot equalized with a header in the 27th and set up Giroud’s first goal shortly after.

FIFA – Eriksen plays at World Cup after cardiac arrest at Euro 2020
Christian Eriksen is back playing a major tournament less than a year and a half after his cardiac arrest at the European Championship. Eriksen started in his customary playmaker position for Denmark’s opening game at the World Cup against Tunisia in Group D and played the full 90 minutes of a 0-0 draw. Medics used a defibrillator to restart Eriksen’s heart after he collapsed and was lifeless on the field at Parken Stadium in Copenhagen in June of last year. His appearance at the World Cup is the latest step of a remarkable comeback that has already seen him return to elite soccer in the Premier League.

FIFA – FIFA charges Ecuador over fan chants at World Cup opener
Discriminatory chants allegedly by Ecuador fans at the World Cup opening game led FIFA to open the first disciplinary case of the tournament. FIFA says the charge was brought “due to chants” at the game against Qatar on Sunday. FIFA cited the section of its disciplinary code dealing with discrimination. The chants were reportedly directed at Chile whose soccer federation brought a legal case ahead of the World Cup to try to take Ecuador’s place.