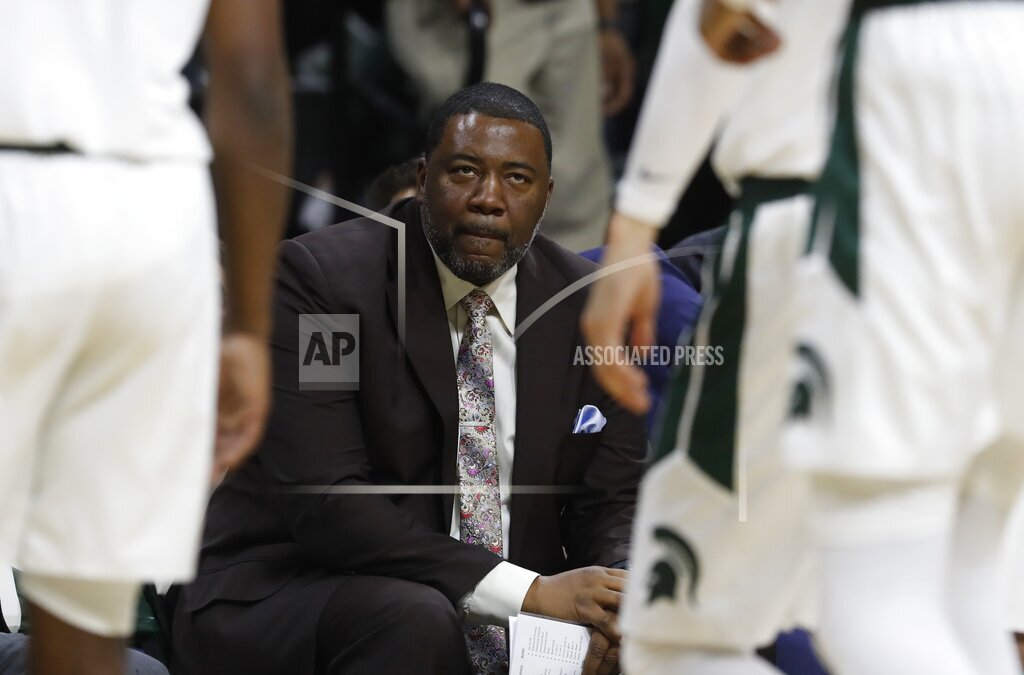 NCAAMBKB – Dwayne Stephens leaves Michigan St to lead Western Michigan
Western Michigan has hired longtime Michigan State assistant Dwayne Stephens to lead its basketball program. Stephens is scheduled to have his first news conference as Broncos coach on Wednesday. The former Spartans forward was on Hall of Fame coach Tom Izzo’s staff for 19 seasons, including the last decade as an associate head coach. Clayton Bates resigned as Western Michigan’s coach last month after winning eight games in his second season. The Broncos have made four NCAA Tournament appearances, most recently in 2014.

Kansas 72, North Carolina 69 – Kansas rallies, beats North Carolina 72-69 to win NCAA title
Kansas finished off the biggest comeback in national championship history Saturday night, getting a big game from David McCormack, crucial shots from Remy Martin and surviving a potential game-tying 3-pointer by Caleb Love at the buzzer for a 72-69 victory in the Superdome. The senior-laden Jayhawks trailed 40-25 at halftime before rallying to win their fourth national championship, and the second for coach Bill Self, on the same floor where they lost to Kentucky in the national title game a decade ago.

MLB – Tigers acquire OF Austin Meadows in trade with Rays
The Detroit Tigers have acquired outfielder Austin Meadows in a trade with the Tampa Bay Rays. Detroit sent infielder Isaac Paredes and a competitive balance round B pick in the 2022 amateur draft to Tampa Bay. Meadows hit .234 with 27 homers and a career-high 106 RBIs last season. Detroit is much improved after going 77-85 last year in its fifth consecutive losing season. Meadows joins a lineup that includes Javier Báez, who signed a blockbuster deal with the Tigers in free agency, and Spencer Torkelson, one of the majors’ top slugging prospects

MLB – Robinson’s 42 in Dodger blue for all uniforms on April 15
All major league players, managers, coaches and umpires will wear Jackie Robinson’s No. 42 in Dodger blue for the first time on April 15, the 75th anniversary of his breaking the major league color barrier. Major League Baseball retired Robinson’s number in 1997 and all uniformed personnel have worn 42 on Jackie Robinson Day since 2009, but this will be the first time the numbers all will be in the color of Robinson’s Dodgers.

Golf – Masters – Masters is all about Tiger Woods, even with so many subplots
This Masters is all about Tiger Woods to start the week. That’s been the case ever since he won his first green jacket 25 years ago. But it’s even greater now. His right leg was severely injured in a car crash just over 13 months ago. And now he might be playing the hilly terrain of Augusta National. Other players are overshadowed by the question of whether Woods will actually tee it up this week. There’s Rory McIlroy going after the career Grand Slam again. Not to be forgotten is Bryson DeChambeau and his peculiar set of injuries.

NFL – Commanders refute report team withheld ticket revenue
The Washington Commanders are denying a report that alleged they withheld ticket revenue from visiting teams. A team spokeswoman said in a statement there was absolutely no withholding of ticket revenue at any time. She added that anyone who testified to Congress suggesting that committed perjury. The lawyer for a former Washington VP of sales and customer service said her client testified truthfully and accused the NFL club of defamation. Front Office Sports citing sources reported the House Oversight Committee received information to indicate Washington withheld ticket revenue. Congress began investigating the team earlier this year after the league did not release a written report of an investigation into sexual harassment inside the organization.

NFL – Eagles, Saints swap several draft picks, including 2023 1st
The Philadelphia Eagles have traded two first-round picks in this month’s draft to the New Orleans in a major swap of assets. The Eagles sent picks Nos. 16 and 19 and a sixth-rounder (No. 194) to the Saints for the 18th overall pick, a third-rounder (No. 101), a seventh-rounder (No. 237), a 2023 first-rounder and a 2024 second-rounder. The move leaves Philadelphia with two firsts, Nos. 15 and 18. The Saints also now have two firsts.

FIFA – US to play El Salvador, Grenada in World Cup prep matches
The United States will play 74th-ranked El Salvador and No. 170 Grenada in the CONCACAF Nations League as preparation for the World Cup in November. The 15th-ranked U.S. has Nations League games on June 11 and 14 in Group D, and it also intends to play exhibition games on June 1 and 5, and on Sept. 23 and 27. Back in the World Cup for the first time since 2014, the U.S. opens Group B against Scotland, Wales or Ukraine on Nov. 21. It faces England four days later and meets Iran on Nov. 29.