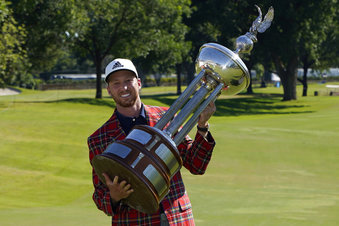 The PGA Tour returned after three months and Commissioner Jay Monahan felt every bit a winner as Daniel Berger at Colonial.
There were no positive tests from the 487 administered at the Charles Schwab Challenge to players, caddies and key personnel. There were no fans, either.
Monahan called it a phenomenal return, mainly because it was a healthy won.
Berger won in a sudden-death playoff when Collin Morikawa missed a 3-foot putt.
Morikawa says just because it was a good return doesn’t mean players can ignore that the COVID-19 pandemic remains a threat.

Denny Hamlin found the magic at Homestead-Miami Speedway, once again.
Hamlin went to the lead for the final time with 30 laps left and held off Chase Elliott for his record-tying third NASCAR Cup Series victory at Homestead. Former drivers Tony Stewart and Greg Biffle are the other three-time winners.
Hamlin is in the club now, after battling Elliott most of the night. Hamlin raced to his third victory of the season and 40th overall.
He opened the season with a victory in the Daytona 500 and won at Darlington last month.
At Homestead, he led 137 of 267 laps on the 1 1/2-mile track in Joe Gibbs Racing’s No. 11 Toyota, finishing 0.895 ahead of Elliott.

Major League Baseball appears headed to its shortest season since the 1870s.
Baseball players have told the commissioner’s office that any more talks on starting the season would be pointless, and that owners should order a return to work.
Union head Tony Clark said in a statement Saturday that “It’s time to get back to work. Tell us when and where.”
The union’s action might lead to a season of about 50 games rather than the 82 initially proposed by MLB. The Major League Baseball Players Association could respond by filing a grievance that would be heard by arbitrator Mark Irvings, arguing players are owed hundreds of millions of dollars in damages due to a shorter season.
MLB responded with a statement accusing the union of not negotiating in good faith and cited the March agreement that called for prorated salaries but did not obligate teams to play in empty ballparks. Clubs could file a grievance claiming the union did not meet its “good faith” obligation.
Overall, this could spark lengthy litigation and could even prompt some star players to sit out.

Coach Kirk Ferentz and three of his players say the Iowa football team took a big step toward improving its lines of communication in the week since the program was hit with allegations of systemic racism. Players returned to campus to begin voluntary workouts and spent two days with coaches voicing concerns about the program’s culture. Ferentz says the meetings were raw and emotional and that players did most of the talking.

College officials haven’t come up with a consensus opinion as they debate whether to announce how many of their athletes test positive for the coronavirus. Nearly half of the 66 Football Bowl Subdivision members that responded to an Associated Press inquiry said they were still deciding whether to announce the number of athletes with positive tests. Just over half of the schools will not release any numbers to the general public. Schools are trying to balance the public’s right to know during a pandemic against student privacy rights.

The Pat Tillman Foundation is awarding scholarships to 60 U.S. service members, veterans and military spouses. In recognition of their service and leadership potential, the Tillman Scholars will receive scholarship funding to pursue higher education and continue their service in the fields of health care, business, law, public service, STEM education and overall education, and the humanities. In 2002, Tillman put his NFL career as a safety with the Arizona Cardinals on hold to serve in the U.S. military. Family and friends established the Pat Tillman Foundation following his death in April 2004 while serving with the 75th Ranger Regiment in Afghanistan.