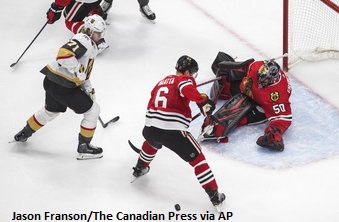 Baseball yesterday…
Cleveland 8,  Tigers 5
The Cleveland Indians beat the Tigers for the 20th straight time, nearing the major league record for most wins by a team over a single opponent, as Franmil Reyes hit two home runs to defeat the Tigers 8-5. Baltimore holds the record with 23 consecutive wins over Kansas City in 1969-70. The Indians can match the record when they host Detroit in a three-game series next weekend. Francisco Lindor, Jose Ramirez and Sandy Leon also homered as the Indians connected a season-high five times. Reyes homered three times in the three-game sweep, but exited in the ninth inning after being hit by a pitch in the left hand.

White Sox 7,  St. Louis 2
The White Sox tied a major league record with four consecutive home runs, all against reliever Roel Ramirez in his major league debut, and went on to beat the St. Louis Cardinals 7-2. Ramirez is the first pitcher to allow four straight homers in his debut. Yoán Moncada, Yasmani Grandal, José Abreu and Eloy Jiménez connected during a six-run fifth inning. Ramirez took the mound in the fifth with Chicago leading 1-0. He struck out Luis Robert to start, but things went south quickly. After two singles, a caught stealing and a walk, Moncada smacked a three-run homer to right.

Milwaukee 6,  Cubs 5
Keston Hiura and Orlando Arcia homered, and the Milwaukee Brewers beat the Chicago Cubs 6-5 for their third straight win against the NL Central leaders. Arcia had three hits and scored the go-ahead run on Ryan Braun’s seventh-inning single off Jason Adam. Hiura belted a tying three-run drive in the third for his fifth homer. Eric Yardley, the first of four Milwaukee relievers, pitched a scoreless inning for the win. Josh Hader got three outs for his fifth save.

The NCAA’s chief medical officer says there is a narrow path to playing college sports during the coronavirus pandemic and if testing nationwide doesn’t improve it cannot be done. Dr. Brian Hainline told CNN late Saturday that “everything would have to line up perfectly.” On Sunday morning, Big Ten players continued their push to get the conference to overturn its decision to postpone football until spring. Ohio State quarterback Justin Fields, Penn State tight end Pat Freiermuth and other players posted on Twitter an online petition requesting the Big Ten reinstate the schedule the conference released six days before canceling the fall season. Much of college sports has been canceled this fall, with conferences hoping to make up sports seasons, including football, in the spring.

Jim Herman rallied to win the Wyndham Championship and a spot in the FedEx Cup playoffs. Herman capped his third PGA victory by shooting a 7-under 63 for a one-stroke victory over Billy Horshel. Herman overcame a four-stroke deficit in the final round and overtook Horschel with a birdie on the 71st hole. The 42-year-old Herman finished at 21-under. Horschel closed with a 65. He had a final chance to tie on the 72nd hole, but his 8-foot birdie putt slid left of the cup.

Marco Andretti won the pole for the Indianapolis 500 in a lightning-fast first step toward snapping the infamous “Andretti Curse” at Indianapolis Motor Speedway. Andretti logged a four-lap average of 231.068 mph and a member of the Andretti family will now lead the field to green for the first time in 33 years. Mario Andretti won his third and final pole for the Indy 500 in 1987, when grandson Marco was an infant. Scott Dixon and Takuma Sato completed the front row for the Aug. 23 race. Mario Andretti in 1969 became the only member of the venerable racing family to win the 500.