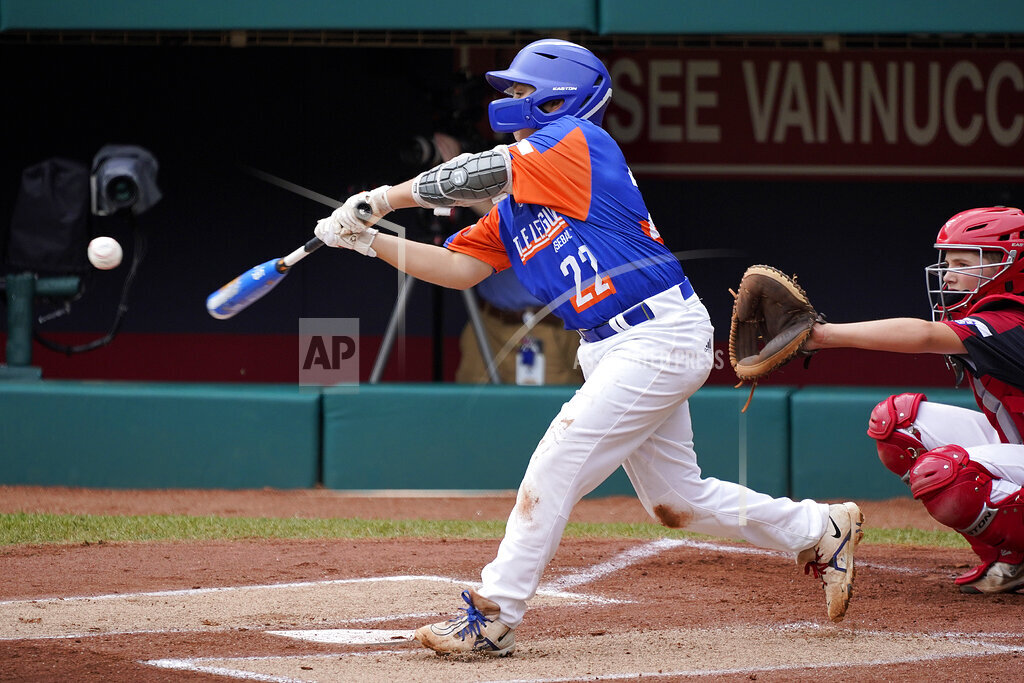 Michigan 5, Ohio 2 – Lake Superior: Michigan beats Ohio for Little League title
Jackson Surma drove in four runs and Ethan Van Belle struck out eight as Michigan beat Ohio 5-2 in the championship game of the Little League World Series. The team from Taylor North Little League delivered the first LLWS title for the state of Michigan since 1959. Both teams are from the Great Lakes, marking the only time clubs from the same region played in the championship. That was because international teams didn’t compete in the LLWS for the first time since 1975, due to travel restrictions caused by the COVID-19 pandemic.

Blue Jays 2, Tigers 1 – 2 Jays homers enough for Berríos in 2-1 win over Tigers
José Berríos pitched seven strong innings and the Toronto Blue Jays beat the Tigers 2-1, taking two of three in a low-scoring series with Detroit. Bo Bichette and Kevin Smith homered for Toronto, which won 3-2 on Saturday and lost 2-1 on Friday. Berríos allowed one unearned run on six hits in seven innings. He struck out 11 without walking a batter. Tim Mayza got the final four outs for his first career save. Detroit’s Matt Boyd allowed two runs in four innings in his first start since June 14.

White Sox 13, Cubs 1 – Luis Robert homers twice as White Sox pound Cubs 13-1
Luis Robert homered twice, Dylan Cease tied a career high with 11 strikeouts and the Chicago White Sox pounded the Chicago Cubs 13-1. Eloy Jiménez, Yasmani Grandal and Brian Goodwin also connected for the White Sox, who went 5-1 against the Cubs this year. Robert, Jiménez and Goodwin each drove in three runs. White Sox slugger José Abreu hit a two-run double in a seven-run fifth to get to 101 RBIs with 29 games left. The reigning AL MVP drove in a career-high 123 runs in 2019. Frank Schwindel homered for the Cubs in the fourth.

MLB – Boo who? Báez, Mets flip thumbs down on fans; team prez mad
Javier Báez and his New York Mets teammates turned the boos at Citi Field to cheers this weekend — and turned their thumbs upside down at frustrated fans. Báez launched a 444-foot home run Sunday in a 9-4 win over the Washington Nationals, then flashed a double thumbs-down gesture toward the crowd on his way back to the dugout. Later, he said Mets players have been making the hand signal after big hits in response to fans who have jeered the club during a rough August. Mets President Sandy Alderson swiftly condemned those remarks and signs, saying they are “totally unacceptable and will not be tolerated.” Alderson said he will meet with Mets players and staff to directly deliver that message.

Sky 107, Storm 75 – Parker scores 25 points, Sky hit 15 3s to rout Storm
Candace Parker scored a season-high 25 points and the Chicago Sky beat the Seattle Storm 107-75 on Sunday to complete a two-game sweep. Chicago tied its franchise record with 15 3-pointers and set the club mark for margin of victory at 32. The Sky have won three in a row, also beating Seattle 73-69 on Thursday night. Seattle has lost three in a row and is 2-5 since returning for the Olympic break. Parker scored 19 points on 8-of-12 shooting as Chicago erupted for 63 first-half points to take a 22-point lead. The two-time WNBA MVP, in her first season with the Sky after 13 seasons with the Los Angeles Sparks, also had nine rebounds and two blocks.
NFL – National Football League – Preseason week 3
This weekend
Indianapolis Colts 27, Detroit Lions 17
Chicago Bears 27, Tennessee Titans 24

NFL – Saints move practice to home of Cowboys after Ida evacuation
A person with knowledge of the decision says the New Orleans Saints are planning to practice this week at the home of the Dallas Cowboys after evacuating because of Hurricane Ida. The Saints are scheduled to practice Monday, Tuesday and Wednesday at AT&T Stadium before taking a break heading into the regular season. That’s according to a person who spoke on condition of anonymity because the club wasn’t discussing its plans publicly. New Orleans is supposed to open at home Sept. 12 against Green Bay. Ida made landfall 16 years to the day after Katrina devastated New Orleans. The Saints spent the entire 2005 season away from home.

Golf – PGA – Cantlay wins marathon playoff at BMW Championship
Patrick Cantlay emerged as the winner of a lengthy playoff that decided the PGA’s BMW Championship near Baltimore. Clutch down the stretch and for six dynamic playoff holes, Patrick Cantlay put a fitting end to an epic battle with Bryson DeChambeau by making an 18-foot birdie putt on the 18th hole. DeChambeau missed four birdie putts to win in regulation and in the playoff. He missed the most important putt of the week from just inside 10 feet to extend the playoff. They both finished regulation at 27-under 261. No one had ever shot 261 on the PGA Tour and didn’t take home the trophy. Cantlay earned the sixth and final automatic spot on the U.S. Ryder Cup team by winning the tournament. Tony Finau (FEE’-now) was in the sixth spot until he was surpassed by Cantlay’s victory.

Golf – Champions – Joe Durant holds off Bernhard Langer in The Ally Challenge
Joe Durant made a 5-foot bogey putt on the par-4 18th for a one-stroke victory over Bernhard Langer in The Ally Challenge.  The 57-year-old Durant closed with a 4-under 68 to finish at 17-under 199 at Warwick Hills. He won for the fourth time on the PGA Tour Champions after winning four times on the PGA Tour.  Steven Alker was third at 15 under after a 67.

Olympics – Jacques Rogge, IOC president for 12 years, dies at 79
The International Olympic Committee says Jacques Rogge, who led the organization as president for 12 years, has died. He was 79. Rogge was an Olympic sailor and orthopedic surgeon from Belgium. The IOC announced his passing without giving details. Rogge’s health had visibly declined when he attended Olympic events since his presidency ended in 2013. IOC president Thomas Bach says Rogge "will be remembered particularly for championing youth sport and for inaugurating the Youth Olympic Games.”