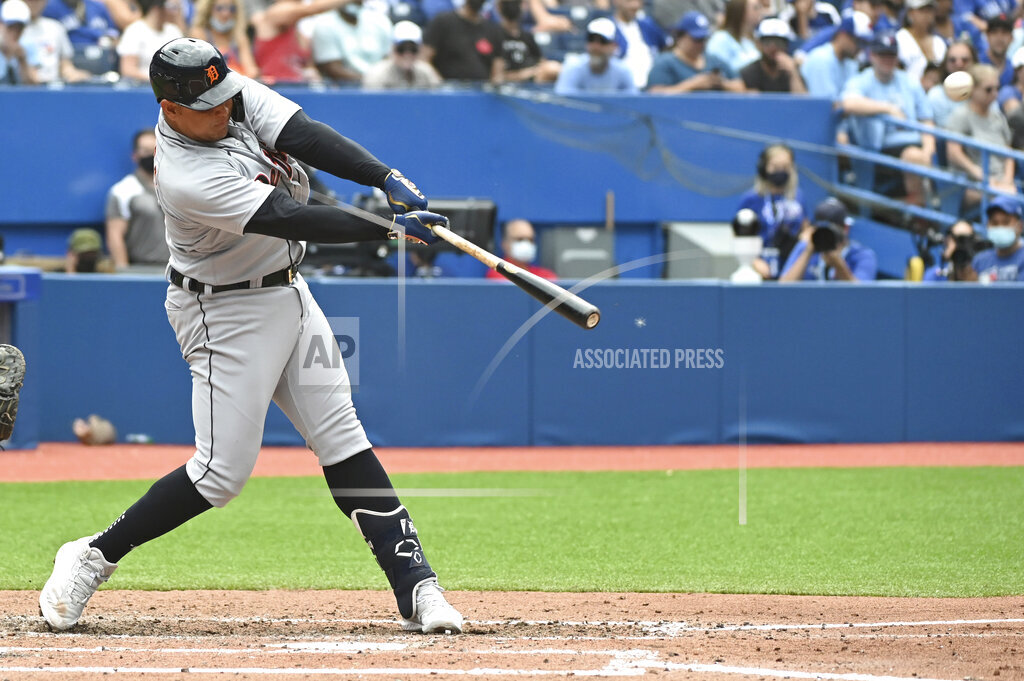 Tigers 5, Blue Jays 3 – F/11 – Cabrera hits 500th career homer, Tigers beat Jays 5-3 in 11
Miguel Cabrera became the 28th major leaguer to hit 500 home runs, Daz Cameron doubled home the winning run in the 11th inning, and the Detroit Tigers beat the Toronto Blue Jays 5-3. The 38-year-old Cabrera connected on a 1-1 pitch from left-hander Steven Matz in the sixth, sending the ball over the scoreboard in right-center field. Measured at 400 feet, the homer tied the score 1-all. Left-hander Kirby Snead (0-1), Toronto’s seventh pitcher of the game, got two quick outs in the 11th before Cameron and Willi Castro hit back-to-back RBI doubles.  Cabrera won the Triple Crown and the first of back-to-back MVP awards in 2012. He is the first Venezuelan to hit 500 homers. He is hoping to become the first hitter to reach 500 homers and 3,000 hits in the same season.

Rays 9, White Sox 0 – Rays rout White Sox 9-0, take 2 of 3 in series; Archer hurt
Backup catcher Francisco Mejía had a three-run double, five Tampa Bay pitchers combined on a seven-hitter, and the Rays beat the Chicago White Sox 9-0 in a matchup of AL division leaders. Austin Meadows had three RBIs for Tampa Bay, which took the final two games of the series after the White Sox won the opener 7-5 in 11 innings. The Rays outscored Chicago 17-4 in the two wins. Tampa Bay starter Chris Archer departed with left hip tightness after two innings. It was Archer’s first start since leaving a game April 10 against the New York Yankees with right forearm tightness.

NASCAR – Blaney takes lead on final restart, holds on to win Michigan
Ryan Blaney took the lead from William Byron on a late restart and bobbed and weaved his way across the final seven laps to win at Michigan International Speedway. Blaney edged Byron by 0.077 seconds — the closest finish on the two-mile track since electronic scoring began. He has two victories this season and six overall. Kyle Larson finished third, Kyle Busch fourth, and Denny Hamlin fifth. Blaney gave Team Penske a weekend sweep of NASCAR and IndyCar races and ended Kevin Harvick’s reign as the Michigan champ. Harvick won thee last three races and four of five at the track.

IndyCar – Erratic driving upends IndyCar’s championship race
A rash of overaggressive driving has jumbled the IndyCar championship fight. Pato O’Ward passed Alex Palou for the points lead after Palou was caught in a three-car accident early in Saturday’s race at World Wide Technology Raceway outside of St. Louis. Palou was a victim of yet another sketchy restart of drivers slowing down and forcing a backup behind them. Series veterans believe it’s become a big enough problem that race control needs to get involved. There are three races remaining and five title contenders left. O’Ward now leads Palou by 10 points and just 60 points separate the top five drivers.

NFL – Titans coach Mike Vrabel tests positive for COVID-19
Tennessee Titans coach Mike Vrabel says he has tested positive for COVID-19 and has quarantined pending further testing. Vrabel told reporters he had a sore throat and an earache. He went to the team headquarters Sunday morning to be tested, and the result came back positive. He originally was scheduled to meet with reporters in person. The availability was pushed back an hour and conducted remotely by Zoom. Vrabel said this spring he was vaccinated against COVID-19. The Titans beat the Tampa Bay Buccaneers 34-3 on Saturday night after a pair of joint practices in Tampa on Wednesday and Thursday.

CFL – CFL postpones game after Edmonton players test positive
The Canadian Football League postponed Edmonton’s game at Toronto scheduled for Thursday night after a number of Elks players tested positive for COVID-19. The CFL said Sunday night the Elks will not practice or travel until league chief medical officers and public health officials believe it is safe. The CFL also said all of Edmonton’s tier-one personnel, including players, coaches and support staff, will be subjected to enhanced testing protocols. The league said the Elks’ most recent opponent, the BC Lions, will participate in enhanced protocols and will be monitored closely this week.

Golf – PGA – Tuesday golf possible at Northern Trust
There’s a chance the rain-delayed Northern Trust could spill into Tuesday. In a memo sent to players Sunday night, PGA Tour commissioner Jay Monahan said he is amending the bad weather guidelines to allow for a Tuesday finish regardless of how much golf is played Monday. Monahan cited the importance and the sequential nature of the FedEx Cup playoffs in making an exception to the guidelines. The tour said spectators would not be allowed for the final round because of some 6 inches of rain that had left walking routes impassable by Sunday night.

Golf – LPGA – Nordqvist wins Women’s British Open for 3rd major title
Anna Nordqvist has won her third major title with a one-shot victory at the Women’s British Open at Carnoustie. Nordqvist tapped in for par on the last hole for a 3-under 69 to finish at 12-under. Lizette Salas, Georgia Hall and Madelene Sagstrom tied for second at 11 under. Nanna Koerstz Madsen was tied for the lead with Nordqvist heading down No. 18 before closing with a double-bogey.

Golf – Champions – Pampling wins after 2 others falter
Rod Pampling won the Boeing Classic on Sunday for his first PGA Tour Champions victory. The victory was made possible when Jim Furyk (FYOOR’-ihk) and Woody Austin failed to get up-and-down for birdie from greenside bunkers on the par-5 18th.  Pampling shot a 6-under 66 to finish at 12-under 204. The 51-year-old Australian won three times on the PGA Tour, the last in 2017 in Las Vegas.

Tokyo Paralympics press ahead to allow students to attend
Plans are afoot to allow tens of thousands of school children to attend the Tokyo Paralympics despite the spread of the coronavirus delta variant among teenagers and those even younger who are not vaccinated. All other fans have been banned as they were for the Olympics. Tokyo Governor Yuriko Koike has said she will press ahead as long a parents and schools are supportive. The Tokyo organizing committee and the International Paralympic Committee also back the plan and say it is safe. Opposition is coming from the Japanese government’s top medial adviser. Dr. Shigeru Omi told a parliamentary session a few days ago that the current COVID-19 situation “compared to before the Olympics, is significantly worse.”