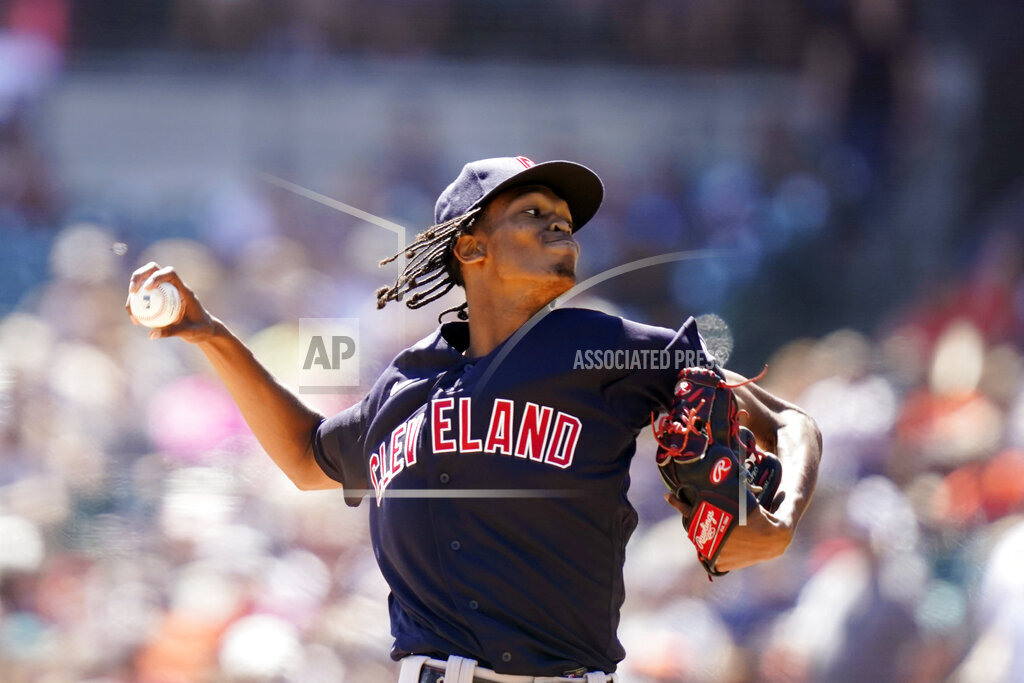 Indians 11, Tigers 0 – McKenzie loses perfect game in 8th, Indians beat Tigers 11-0
Indians starter Triston McKenzie retired the first 23 Detroit batters in order before Harold Castro lined a single to right with two out in the eighth inning and Cleveland beat the Tigers 11-0. The 24-year-old stunned the Comerica Park crowd of 25,684 hoping to see Miguel Cabrera’s 500th homer. Instead, they gave McKenzie a standing ovation after Castro’s hit and another after he finished the inning with his 11th strikeout. McKenzie came within four outs of breaking baseball’s longest no-hit drought.

Marlins 4, Cubs 1 – Chisholm homers as Marlins beat reeling Cubs 4-1
Jazz Chisholm Jr. and Jesús Aguilar homered, and the Miami Marlins handed the Chicago Cubs their 11th straight loss with a 4-1 victory. The game was tied at 1 before Chisholm connected against Alec Mills in the sixth inning. Chisholm also singled and scored on Aguilar’s 22nd homer in the seventh. Miami right-hander Elieser Hernandez permitted one run and four hits in 5 1/3 innings. Chicago matched its longest slide of the season. They’ve also dropped 11 straight from June 25 to July 6.

NASCAR – Allmendinger gets 1st Indy win in crash-marred Brickyard 200
AJ Allmendinger took advantage of two frightening multi-car crashes, the leader getting spun out and a penalty — all in the last five laps — to win the Brickyard 200. He beat Ryan Blaney by 0.929 seconds in the first Cup race held on Indianapolis Motor Speedway’s road course. But the victory was overshadowed by two big pileups in the final five laps that appeared to be caused by the curbing on the track. Sixteen cars were involved but NASCAR officials did not report any serious injuries.

Sky 87, Storm 85 – OT – Copper, Quigley lead Sky to 87-85 OT win over Storm
Kahleah Copper scored 19 points, Allie Quigley hit five 3-pointers and finished with 17 points, and the Chicago Sky beat the Seattle Storm 87-85 in overtime. Copper made two free throws to give the Sky an 85-83 lead with 1:40 to play. After Chicago got a stop on the other end, Ezi Magbegor blocked a layup by Copper. Candace Parker grabbed the offensive rebound and missed a put-back attempt but again secured the rebound before making a short basket to cap the scoring with 1:06 left. Jewell Loyd led Seattle (16-6) with a season-high 26 points but missed a good look at a potential tying layup as time expired. Magbegor had a career-best 21 points, nine rebounds and three blocks.

Sparks 75, Fever 70 – Nneka Ogwumike returns, helps Sparks beat Fever 75-70
Nneka Ogwumike had 12 points in her return from a knee injury to help Los Angeles beat the Indiana Fever 75-70 on Sunday night in the Sparks’ first game at Staples Center since September 2019. Sidelined 2 1/2 months by a sprained knee, Ogwumike also had seven rebounds and two blocks in 31 minutes. Brittney Sykes led Los Angeles with 16 points, Amanda Zahui B had 13, and Erica Wheeler added 12. Kelsey Mitchell led WNBA-worst Indiana with 20 points as both teams returned from the break for the Tokyo Olympics. The Sparks went 4-11 without Ogwumike, dropping six in a row before the break.

Golf – PGA – Kisner wins Wyndham Championship
Kevin Kisner birdied the second extra hole to win a record-tying six-man playoff at the Wyndham Championship.  Kisner struck his approach on the 18th hole to about 3 feet and buried the putt for the win.  Kisner had been 0-5 in his career in playoffs. He was tied at 15-under through 72 holes with Adam Scott, Kevin Na, Si Woo Kim, Branden Grace and Roger Sloan. Scott missed a 4-foot putt for the win on the first playoff hole.

Golf – LPGA – O’Toole gets 1st LPGA win at Women’s Scottish Open
Ryann O’Toole has earned her first LPGA Tour victory in 228 starts, closing with a bogey-free 8-under 64 at Dumbarnie Links to take the Trust Golf Women’s Scottish Open.  O’Toole began the round tied for the lead before finishing at 17-under for a three-shot edge over Lydio Ko and Atthaya Thitikul.  Lydia Ko closed with a course-record 63.

Golf – Champions – Barron’s late birdie binge brings victory
Doug Barron birdied the final three holes for his third straight 6-under 64 and a two-stroke victory in the PGA Tour Champions’ Shaw Charity Classic.  The 52-year-old Barron also eagled the par-5 11th in a back-nine 30 at Canyon Meadows for his second win on the 50-and-over tour.  Steve Flesch was second at 16 under after a 65, losing a late stroke with a bogey on No. 16.