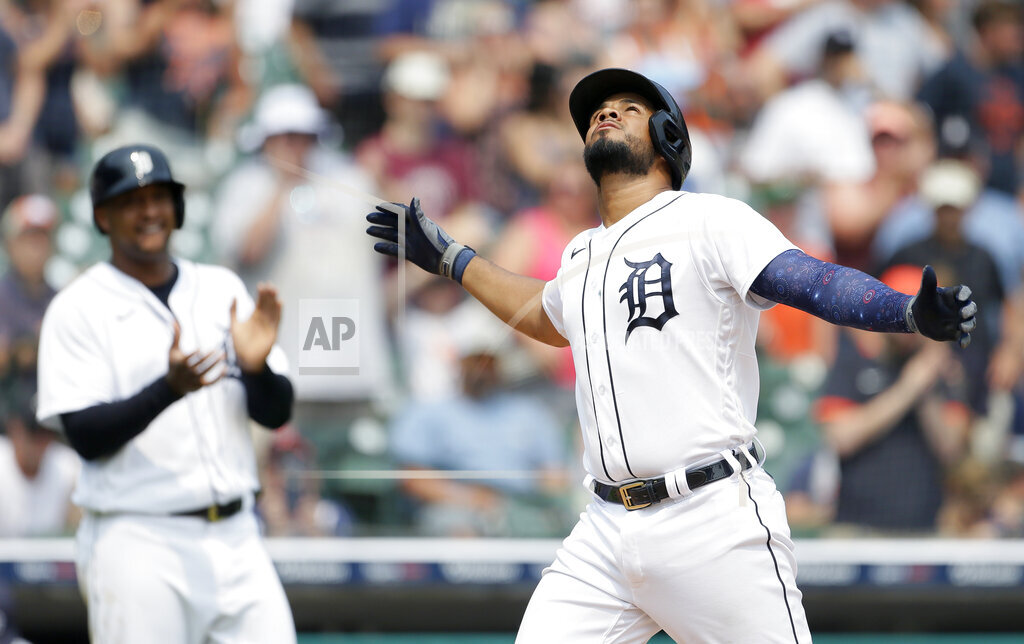 Tigers 7, Twins 0 – Candelario, Tigers complete sweep of Twins with 7-0 win
Jeimer Candelario homered, drove in three runs and started two double plays as the Detroit Tigers finished a weekend sweep of the Minnesota Twins with a 7-0 win. The game was the seventh in a row between the teams. Minnesota swept a four-game series at home immediately before the All-Star break before losing three in Detroit. The series was originally scheduled for four games, but Friday’s doubleheader was rained out. The Tigers swept a doubleheader on Saturday.

White Sox 4, Astros 0 – Rodón dominates through 7, White Sox blank Astros 4-0
Carlos Rodón allowed one hit through seven dominant innings, Yoán Moncada and Tim Anderson hit solo homers and the Chicago White Sox topped the Houston Astros 4-0. Danny Mendick and Adam Engel added RBI singles, and the White Sox stymied Astros hitters for the second straight game after losing their first five this season to Houston. Chicago has won seven of eight to move to the top of the American League standings. Rodón struck out 10 and walked none in this meeting of division leaders. Houston’s Framber Valdez yielded four runs and seven hits in 6 1/3 innings, striking out four and walking two.

Diamondbacks 6, Cubs 4 – Kelly, Escobar lead Diamondbacks over Cubs 6-4
Merrill Kelly threw eight solid innings, Eduardo Escobar hit a two-run homer and the Arizona Diamondbacks avoided a three-game sweep with a 6-4 win over the Chicago Cubs. Kelly needed just 75 pitches to navigate the Cubs’ lineup through eight innings and threw 59 strikes. He was helped by two spectacular catches by Kole Calhoun. The D-backs have won five of the past six games Kelly has started. Joakim Soria earned his fourth save, one day after blowing a 2-1 lead by giving up three runs in the ninth.

MLB – Padres, Nats recall harrowing scene after shots outside park
The San Diego Padres and Washington Nationals have finished playing, a day after their game was suspended when gunfire erupted outside the stadium. Washington police say three people were injured in the shooting. A woman suffered a graze wound to her back and two people who walked into the hospital with gunshot wounds were in stable condition. A chaotic scene quickly developed at Nationals Park in the sixth inning Saturday night when the shots began to echo all around the stadium. Players quickly cleared the field and fans scrambled for safety, some of them leaving the park and others taking cover. When play resumed Sunday, the Padres wrapped up a 10-4 win. The Nationals then won 8-7 in the regularly scheduled game.

NBA – Resilient Suns? Down 3-2 in Finals, it’s time to find out
The Phoenix Suns like to believe they’re a resilient bunch. Now is one of their few chances this season to prove it. The Suns will be facing an elimination game for the first time in this postseason when they travel to Milwaukee for Tuesday’s Game 6 of the NBA Finals. Phoenix won the first two games of the series before the Bucks rallied to win the next three, including Saturday’s thrilling 123-119 victory in Game 5. It’s the first time since January that the Suns have lost three straight games.

Golf – British Open – Morikawa wins British Open with flawless finish
Collin Morikawa has won the British Open, becoming the first player to capture two different majors on the first attempt. The 24-year-old from California closed with a bogey-free 4-under 66 for a two-shot victory over Jordan Spieth. Louis Oosthuizen, who led the first three rounds, tied for third with U.S. Open champion Jon Rahm. Morikawa’s total of 15-under 265 was a 72-hole record in 15 British Opens at Royal St. George’s. Morikawa also won last year’s PGA Championship on his first try. He is the first player since Bobby Jones in 1926 to win two majors in eight or fewer starts.

NHL – Canadiens’ Price left unprotected for Kraken expansion draft
Goaltender Carey Price has been exposed to the Seattle Kraken in the expansion draft after backstopping the Montreal Canadiens to the Stanley Cup Final. Price agreed to be exposed so the Canadiens could protect cheaper backup Jake Allen. But the risk is that Seattle takes Price and his hefty contract so he can be the face of the NHL’s 32nd franchise. Price is the biggest but he’s not the only star left unprotected for the Kraken to select. St. Louis winger Vladimir Tarasenko is an option after asking the Blues for a trade. And Calgary exposed captain and 2019 Norris Trophy-winning defenseman Mark Giordano.

NASCAR – Almirola ends SHR drought
Aric Almirola has earned the first NASCAR Cup win of the season for Stewart-Haas Racing, taking the summer race at New Hampshire Motor Speedway.  Almirola raced to his third career Cup victory and first since 2018, a needed boost for Ford that also played havoc with the playoff setup with only four races left before the 16-driver field is set.  The race was delayed nearly two hours by rain and NASCAR called it early due to darkness, leaving it eight laps shy of its scheduled conclusion.  Christopher Bell was second, followed by Brad Keselowski, Joey Logano and Ryan Blaney. Bell was the only non-Ford driver among the top 6.

Soccer – CONCACAF – Moore scores 20 seconds in, US beats Canada 1-0 in Gold Cup
Shaq Moore scored 20 seconds in and the United States beat Canada 1-0 to win Group B at the CONCACAF Gold Cup. Moore’s goal was the fastest since U.S. records began in 1990. Clint Dempsey scored 30 seconds in against Ghana in the Americans’ 2014 World Cup opener. Both nations already were assured of advancing. The U.S. finished atop its first-round group with a 3-0 record and will play its quarterfinal on July 25 at Arlington, Texas, against Costa Rica or Jamaica. Canada finished the first round 2-1 and also will play Costa Rica or Jamaica.

Women’s Tennis – Coco Gauff to miss Olympics after testing positive for virus
U.S. tennis player Coco Gauff has tested positive for the coronavirus, forcing her to pull out of the Tokyo Olympics. Gauff revealed her positive test in a tweet on Sunday. The 17-year-old is No. 25 in the WTA rankings. She lost in the fourth round at Wimbledon last month. The U.S. Tennis Association said it was saddened to learn that Gauff will be unable to participate in Tokyo.

Men’s Basketball – Lillard, Johnson lead US to 83-76 exhibition win over Spain
Damian Lillard scored 19 points and Keldon Johnson added 15 to help the U.S. beat Spain 83-76 in the final pre-Olympic game for both teams. Johnson was added to the team two days earlier after Bradley Beal tested positive for the coronavirus and Kevin Love withdrew because of a calf injury. The U.S. also added JaVale McGee, who didn’t play. This was the U.S. team’s fourth exhibition in eight days in Las Vegas. The Americans were supposed to have a fifth against Australia on Friday, but that was canceled out of an abundance of caution because of the coronavirus issues the Americans were dealing with. Ricky Rubio scored 23 points to lead Spain.

Women’s Basketball – US women earn first exhibition win, routing Nigeria 93-62
A’ja Wilson scored 16 points and Breanna Stewart added 14 to help the U.S. beat Nigeria 93-62 in the final pre-Olympic exhibition tune-up for both teams. It was a much-needed win for the U.S., which had dropped consecutive exhibition games for the first time since 2011 with losses to the WNBA All-Stars and Australia earlier this week. The Americans got off to a strong start, racing out to a 20-4 lead.

Russia – Russia at Tokyo Olympics with new name, more doping disputes
Russia is competing under another new name at the Tokyo Olympics in continuing fallout from the Games’ longest-running doping saga. You won’t see the Russian flag above any podiums and the national anthem won’t play. But uniforms are in national colors. Doping cases old and new still cast a shadow over the team. Two swimmers from the Olympic team have been suspended for cases dating back years and two rowers tested positive a month before the Olympics. Still, Russia is sending about 50 more athletes to Tokyo than it did to Rio in 2016.

Covid – Zero risk? Virus cases test Olympic organizers’ assurances
Two South African soccer players have become the first athletes inside the Olympic Village to test positive for COVID-19. Other cases connected to the Tokyo Games were also confirmed Sunday to highlight the herculean task organizers face to keep the virus contained while the world’s biggest sports event plays out. The positive tests came as some of the expected 11,000 athletes and thousands more team officials from across the globe began arriving in the village having traveled through the pandemic to Tokyo. The Olympics open Friday. International Olympic Committee President Thomas Bach has said there was “zero” risk of athletes passing on the virus to Japanese or other residents of the village. But that bold statement was already being tested.

Japan girds for a surreal Olympics, and questions are plenty
Tens of thousands of visiting athletes, officials and media are descending on Japan for a Summer Olympics unlike any other. There will be no foreign fans, no local fans in Tokyo-area venues. A surge of virus cases has led to yet another state of emergency. And a local vaccination campaign is struggling to keep up. As athletes and their entourages arrive, they’ll be confined to a bubble. Government minders and GPS will try to track visitors’ every move; booze will be curtailed or banned, and, through it all, there will be the inescapable knowledge of the suffering COVID has brought here and around the world.  It will all add up to an utterly surreal Olympics.’