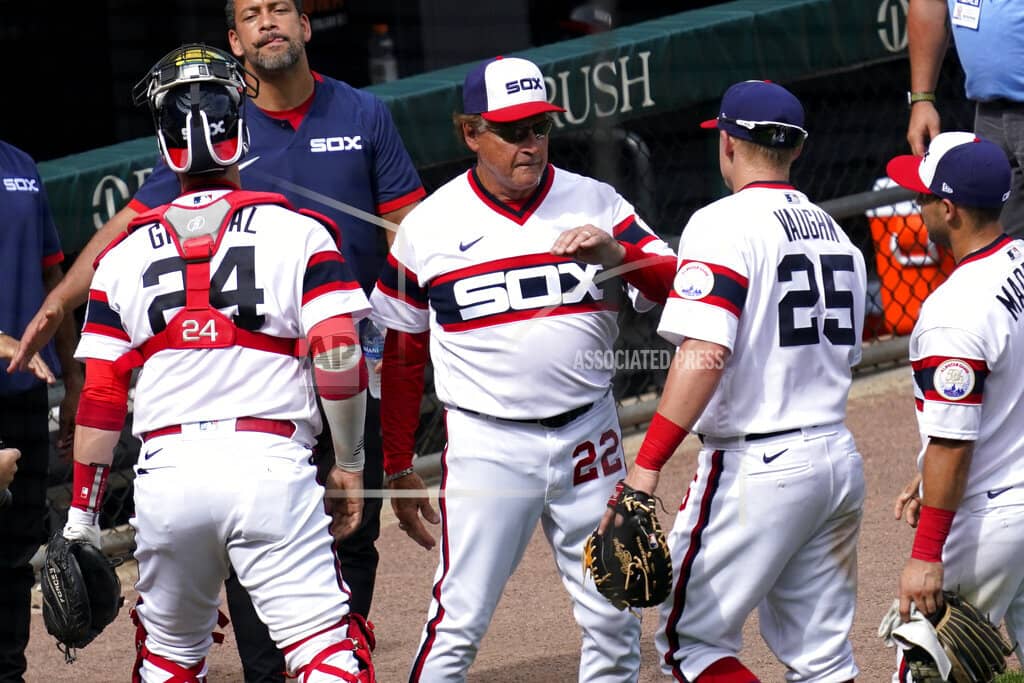 White Sox 3, Tigers 0 – La Russa passes McGraw on wins list as White Sox beat Tigers
Tony La Russa moved into sole possession of second on baseball’s career manager wins list, snapping a tie with John McGraw by directing the Chicago White Sox to a 3-0 victory over the Detroit Tigers. It was win No. 2,764 for La Russa, who was hired by Chicago in October for his first managerial job since he led St. Louis to the World Series championship in 2011. Dylan Cease struck out 10 in seven sparkling innings for the White Sox, and Tim Anderson had two RBIs. The Tigers finished with five hits. They dropped three of four in the series.

Cubs 4, Giants 3 – Wisdom homers twice for Cubs, who avoid sweep with 4-3 win
Patrick Wisdom hit a pair of home runs and drove in three runs in helping the Chicago Cubs avoid a four-game sweep with a 4-3 victory over the San Francisco Giants. Wisdom has seven home runs in 13 games this season. He has a hit in nine of 11 games since his May 25 recalled from Triple-A Iowa. Kyle Hendricks won his fifth straight start, allowing three runs and seven hits in 6 1/3 innings. He walked two and struck out five. Craig Kimbrel struck out two in a perfect ninth for his 14th save.

NHL – Canada grants NHL cross-border travel exemption for playoffs
The NHL has received an exemption from Canadian health officials to allow cross-border travel for teams starting in the semifinal round of the Stanley Cup playoffs. When in Canada, teams will be required to stay in a bubble and be tested daily for COVID-19, similar to the tight restrictions that allowed the NHL to stage and complete its playoffs in two hub cities last year. Teams will be assigned designated hotels and have no interaction with the public. The exemption means the winner of the NHL’s West Division second-round playoff series between Colorado and Vegas will be allowed to travel to face the winner of the North Division second-round series between Winnipeg and Montreal.

NASCAR – Larson wins again as Hendrick continues month of dominance
Kyle Larson beat teammate Chase Elliott in overtime at Sonoma Raceway on Sunday to win his second consecutive race. It continued a month of dominance for Hendrick Motorsports. Hendrick drivers have won four straight races dating to Alex Bowman’s May 16 victory. Larson’s win a week ago in the Coca-Cola 600 at Charlotte Motor Speedway made Rick Hendrick the winningest owner in NASCAR history. It was expected that one of Hendrick’s four drivers would win again on Sunday. But reigning Cup champion Chase Elliott was the favorite. Instead the win went to Elk Grove native Larson, who now has three victories this season.

Tennis – French Open – Serena ousted
Serena Williams has lost in the fourth round of the French Open. Williams was beaten 6-3, 7-5 by Elena Rybakina. Williams is a 23-time Grand Slam champion who has won the title at Roland Garros three times. But the 39-year-old American hasn’t been past the fourth round there since she was the runner-up in 2016. Williams’ exit came on the same day that Roger Federer withdrew from the tournament.

Gymnastics – Seven for Simone; Biles claims another US Gymnastics title
Simone Biles looks ready for the Tokyo Olympics. The 24-year-old easily captured her record seventh U.S. national title, beating runner-up Sunisa Lee by nearly five points. Biles posted the top score on three of the four events, looking far crisper during the finals than she did during the preliminaries. Jordan Chiles was third followed by Emma Malabuyo and Leanne Wong. The meet is the final one before the Olympic trials in St. Louis in late July.

Soccer – Pulisic scores in extra time, US beats Mexico 3-2
Christian Pulisic converted a penalty kick in the 114th minute, backup goalkeeper Ethan Horvath stopped Andrés Guardado’s penalty kick in the 124th minute and the United States overcame an early defensive blunder to beat Mexico 3-2 in a final of the first CONCACAF Nations League that turned on three video reviews. Gio Reyna and Weston McKennie scored as the U.S. twice overcame deficits. Pulisic, fresh off of winning the Champions League with Chelsea on May 29, cut inside the penalty area and was pulled down by Carlos Salcedo in the 108th minute.