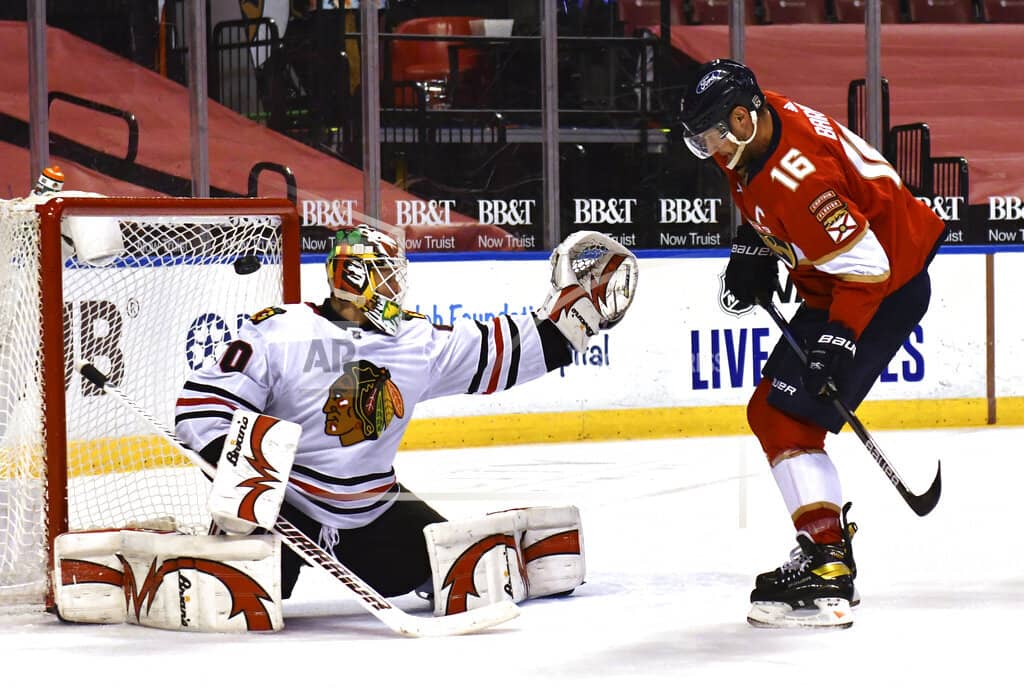 Panthers 5, Blackhawks 2 – Yandle gets 100th NHL goal, Panthers beat Blackhawks 5-2
Keith Yandle got his 100th career goal, Chris Driedger made 23 saves and the Florida Panthers beat the Chicgo Blackhawks 5-2. Eetu Luostarinen scored his first NHL goal, and Aaron Ekblad, Patric Hornqvist, and Jonathan Huberdeau also scored for Florida, which had three goals in the third period to pull away in its delayed opener. The Panthers were to have played Dallas last week twice, games that were called off because of a COVID-19 outbreak among the Stars.  The Blackhawks have scored 2 goals or less in their 3 games this season falling to 0-3-0.

Chiefs 22, Browns 17 – After losing Mahomes, Chiefs and Henne hold off Browns 22-17
The Kansas City Chiefs forced the Cleveland Browns to punt in the waning minutes Sunday with star quarterback Patrick Mahomes out with a concussion. Then 35-year-old backup Chad Henne showed some moxie with a long third-down scramble and a fourth-down completion to Tyreek Hill with just over a minute left to give the Chiefs a first down and allowing them to run out the clock on a 22-17 victory in the divisional round of the playoffs.  They advanced to their third straight AFC title game and will face the Buffalo Bills next Sunday.

Buccaneers 30, Saints 20 – Brady, Bucs, end playoffs for Saints, Brees, 30-20
Tom Brady’s best game in three tries against New Orleans has the Buccaneers moving on in the NFL playoffs and Saints quarterback Drew Brees headed home — perhaps for good. Brady and the Bucs’ offense turned three of the Saints’ four turnovers, which included three Brees interceptions, into touchdowns, and Tampa Bay beat New Orleans 30-20 in the divisional round of the NFL playoffs. Two touchdowns came on short passes to Mike Evans and Leonard Fournette. Brady also scored on a 1-yard run. The Bucs advanced to the NFC championship game in Green Bay.

Bulls 117, Mavericks 101 – Bulls roll past Mavs 117-101 to end 4-game losing streak
Lauri Markkanen had 29 points and 10 rebounds, Garrett Temple scored 15 of his season-high 21 points in the second quarter and the Chicago Bulls ended a four-game losing streak with a 117-101 victory over the Dallas Mavericks. Dallas star Luka Doncic passed Michael Jordan on the career list with his 29th triple-double, finishing with 36 points, 16 rebounds and 15 assists. The Slovenian sensation, who had 30 points at halftime, didn’t get nearly enough help with the Mavericks missing five rotation players because of COVID-19 protocols and guard Tim Hardaway Jr. with a left groin strain.

Clippers 129, Pacers 96 – Clippers beat Pacers 129-96 for 1st 4-game winning streak
Marcus Morris scored a season-high 20 points to lead seven players in double figures, and the Los Angeles Clippers defeated the Indiana Pacers 129-96 for their first four-game winning streak of the season. Paul George and Luke Kennard also scored 20 points each. Doug McDermott led the Pacers with 23 points, making five 3-pointers. Domantas Sabonis added 19 points and 14 rebounds. Indiana closed within two points early in the third before the Clippers ran away. They outscored the Pacers 37-14 the rest of the quarter to lead 100-75 going into the fourth.