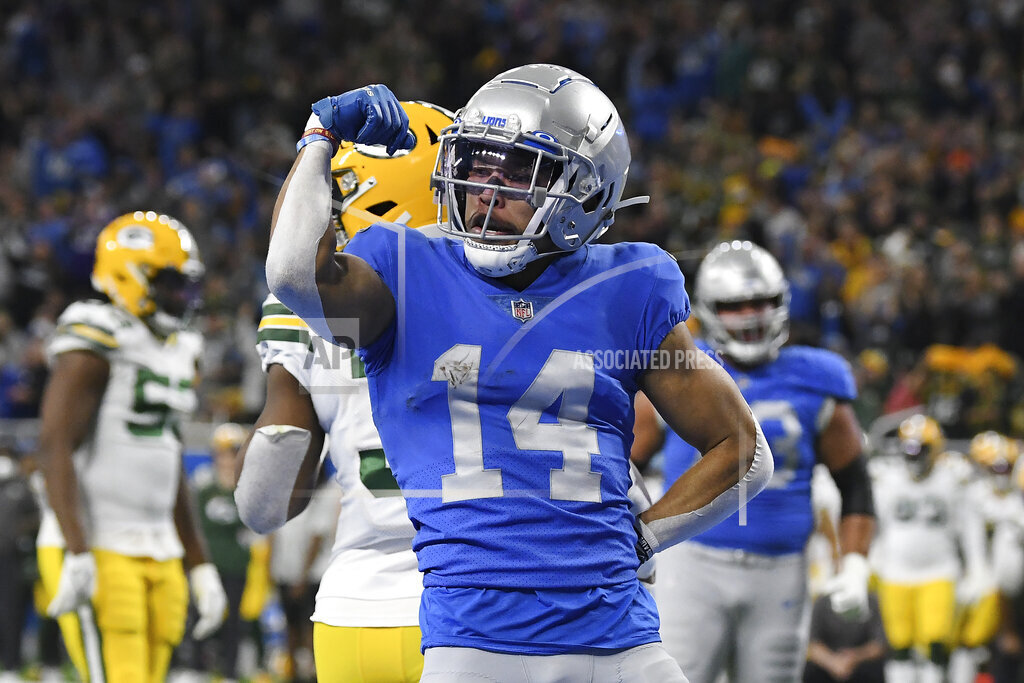 Lions 37, Packers 30 – Rodgers fine, sits 2nd half, top seed Packers lose to Lions
Aaron Rodgers threw two touchdown passes in the first half and sat out the second half with nothing at stake as the Detroit Lions beat the Green Bay Packers 37-30. Jordan Love threw two interceptions late in the game, sealing a defeat that doesn’t affect Green Bay’s playoff positioning. The NFC North champion Packers rolled into the Motor City after already clinching the conference’s No. 1 seed and its only first-round bye. Rodgers was 14 of 18 for 138 yards. The Lions closed coach Dan Campbell’s first season with plenty of pride and trick plays.

Vikings 31, Bears 17 – Vikings beat Bears 31-17; futures uncertain for Nagy, Zimmer
Kirk Cousins passed for 172 yards and three touchdowns in the second half to lead a Minnesota Vikings comeback to beat the Chicago Bears 31-17. The matchup of two eliminated teams with a head coach in danger of being fired saw the Vikings outscore the Bears 28-3 in the second half. Justin Jefferson caught the tying score and K.J. Osborn had the go-ahead touchdown for the Vikings. Darnell Mooney had 12 catches for 126 yards to pass the 1,000-yard receiving mark for the Bears. The Vikings finished 8-9. The Bears went 6-11.

Jaguars 26, Colts 11 – Jaguars clown Colts 26-11, prevent Indy from making playoffs
The Indianapolis Colts got clowned in Jacksonville. This one was more embarrassing than any other loss to the Jaguars, too. Indy badly botched a chance to secure an AFC wild-card spot with a 26-11 loss to Jacksonville on Sunday in the “clown game." It was the team’s seventh consecutive road loss to the Jaguars. The Colts (9-8) still had an outside shot at making the playoffs, but those slim hopes ended when Pittsburgh beat Baltimore. Now, Indy returns home with a two-game skid and facing a long offseason that doesn’t even include a first-round draft pick. The Jaguars (3-14), meanwhile, got a much-needed celebration that ended an eight-game losing streak.

NCAAFB – Commissioners to report on CFP expansion talks to presidents
The administrators who manage the College Football Playoff will report on the progress of expansion talks to a presidential oversight committee on Monday. The CFP management committee wrapped up about seven hours of meetings over two days in Indianapolis. Executive Director Bill Hancock says the group made progress, but gave no indication on whether a consensus was reached on a new format. The board of managers, made up of 11 university presidents and chancellors representing each conference and Notre Dame, must approve any recommendation made by the commissioners. All the conferences support expanding the playoff from four teams, but the process has bogged down as the commissioners wrangled over how and when.

Ducks 4, Red Wings 3 – SO – Trevor Zegras leads Ducks past Red Wings 4-3 in SO
The Anaheim Ducks beat the Detroit Red Wings 4-3 in a shootout. Rookie Trevor Zegras had a goal and an assist before scoring Anaheim’s first goal in the tiebreaker. Lukáš Dostál made 33 saves and won his NHL debut for Anaheim with three stops in the shootout. Troy Terry got his 22nd goal and Max Comtois also scored for the Ducks. Tyler Bertuzzi had a goal and an assist for the Red Wings, who have lost four of five since the holiday break. Filip Hronek and Vladislav Namestnikov also scored for Detroit, and Thomas Greiss stopped 24 shots.

Mavericks 113, Bulls 99 – Doncic has triple-double, Mavericks beat Bulls 113-99
Luka Doncic had 22 points, 14 rebounds and 14 assists for his third triple-double of the season as the Dallas Mavericks beat Chicago 113-99 for their season-best sixth straight win while snapping the Bulls’ nine-game winning streak. Josh Green and Maxi Kleber had season highs with 18 points each for Dallas. It was a career high for Green, who scored nine in the fourth quarter, and Kleber tied a career high hitting six shots behind the arc. The Mavericks’ streak is their longest since also winning six straight in March-April 2016. DeMar DeRozan and Zach LaVine scored 20 points each to lead the Bulls.

Tennis – Australian judge reinstates tennis star Djokovic’s visa
An Australian judge has reinstated tennis star Novak Djokovic’s visa, which was canceled last week because he is unvaccinated. Circuit Court Judge Anthony Kelly also ordered the government to release Djokovic from Melbourne hotel quarantine within 30 minutes of his decision. The Australian government canceled the visa shortly after Djokovic arrived in Melbourne last week because officials decided he didn’t meet the criteria for an exemption to an entry requirement that all non-citizens be fully vaccinated for COVID-19. The judge noted that Djokovic had provided officials at Melbourne’s airport with a medical exemption given him by Tennis Australia.

MILB – AP sources: Yanks’ Balkovec to be first female MiLB manager
The New York Yankees are promoting Rachel Balkovec to manager at Low A Tampa, making her the first woman to skipper a team affiliated with Major League Baseball, according to two people familiar with the move. The people spoke to The Associated Press on condition of anonymity because the club hadn’t announced the promotion. The 34-year-old Balkovec joined the Yankees organization as a minor league hitting coach in 2019. She got her first job in pro baseball with the St. Louis Cardinals as a minor league strength and conditioning coach in 2012.