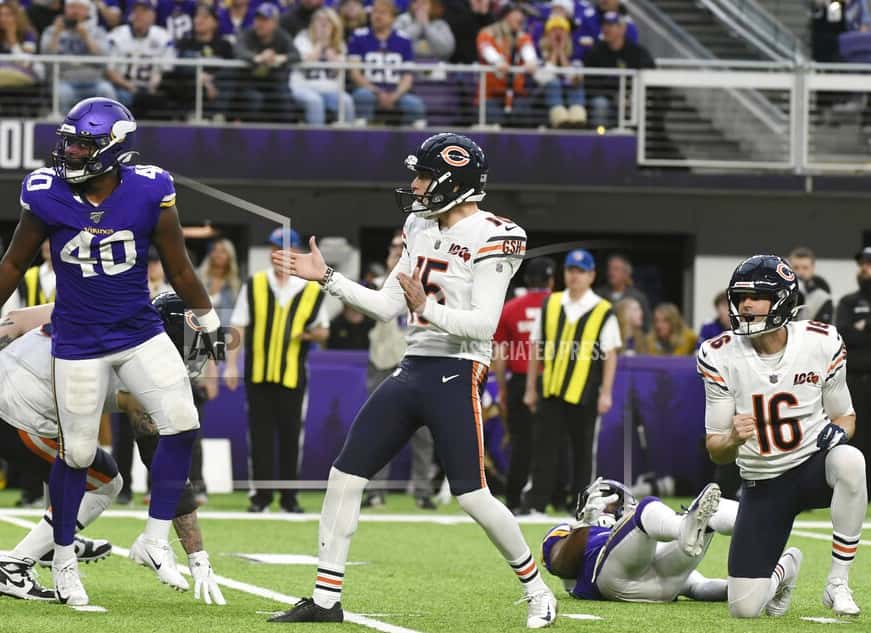 NFL
Green Bay 23, Detroit 20
Mason Crosby made a 33-yard field goal as time expired to lift the Green Bay Packers to a 23-20 win over the Lions to earn a first-round bye. Detroit led by two touchdowns in the second quarter but gave up another fourth quarter rally for Aaron Rogers and the Packers. The Lions closed the season with nine straight losses for their longest losing streak in a season since going 0-16 in 2008. Green Bay won despite Rodgers going 27 of 55 for 323 yards with two touchdowns and an interception. David Blough threw for just 122 yards and one interception for the Lions.

Chicago 21, Minnesota 19
Eddy Piñeiro’s fourth field goal of the game for Chicago came from 22 yards with 10 seconds left, giving the Bears a 21-19 victory over Minnesota. The Vikings rested their regulars for the playoffs. Piñeiro finished the season with 11 straight made field goals, and the Bears went 8-8 to dodge what would have been a fifth losing record in six years. David Montgomery had 23 carries for 113 yards and a touchdown to cap a strong rookie season for the Bears. Mitchell Trubisky was 26 of 37 passing for 207 yards. Mike Boone rushed 17 times for 148 yards and a score for the Vikings.

Looking ahead…
The NFL playoffs will begin Saturday with the Bills visiting the Texans before the Titans take on the Patriots in Foxborough. Sunday’s action will conclude with the Eagles entertaining the Seahawks after the Saints battle the visiting Vikings.
The Ravens, Chiefs, 49ers and Packers will enjoy a free weekend while preparing for the divisional round.
Follow the entire NFL postseason on 106.1 & 1400 WSJM Sports.

MEN’S COLLEGE BASKETBALL
#11 Michigan 86, UMass Lowell 60
Jon Teske had 25 points and eight rebounds, Eli Brooks added 15 points as Michigan closed its nonconference schedule with an 86-60 rout over UMass Lowell. The Wolverines played their first game without leading scorer Isaiah Livers after he injured his groin last week against Presbyterian. He’s out indefinitely. Teske scored the first four points of each half and Michigan never trailed, opening the game on a 10-2 run. The 7-foot-1 senior center dominated against the River Hawks, who do not have a player over 6-7.

#14 Michigan State 95, Western Michigan 62
Foster Loyer scored a career-high 16 points in his start for Michigan State as the Spartans topped Western Michigan 95-62. MSU shook off a slow start to eventually take a 24 point lead into the half. Loyer took over at point guard for MSU as All-American Cassius Winston was sidelined after bruising a bone in his left knee during practice Friday. Xavier Tillman added 15 points and 11 rebounds, Aaron Henry also scored 15 points, and Kyle Ahrens had 12. Michael Flowers and B. Artis White each scored 12 points in the loss for the Broncos.

NHL
Chicago 3, Columbus 2 – shootout
Patrick Kane had the deciding goal in a shootout as the Blackhawks beat the Columbus Blue Jackets 3-2. Jonathan Toews also scored in the tiebreaker for Chicago and Gustav Nyquist tallied for Columbus. Blackhawks goalie Robin Lehner finished with 31 saves. Dylan Strome and Eric Gustafsson scored in the third period for Chicago to force overtime. The Blue Jackets goalie Joonas Korpisalo left the game with an apparent injury after allowing the first Chicago goal in the shootout. There was no work on the nature or seriousness of the injury.

Tonight…
The Blackhawks and Red Wings are off