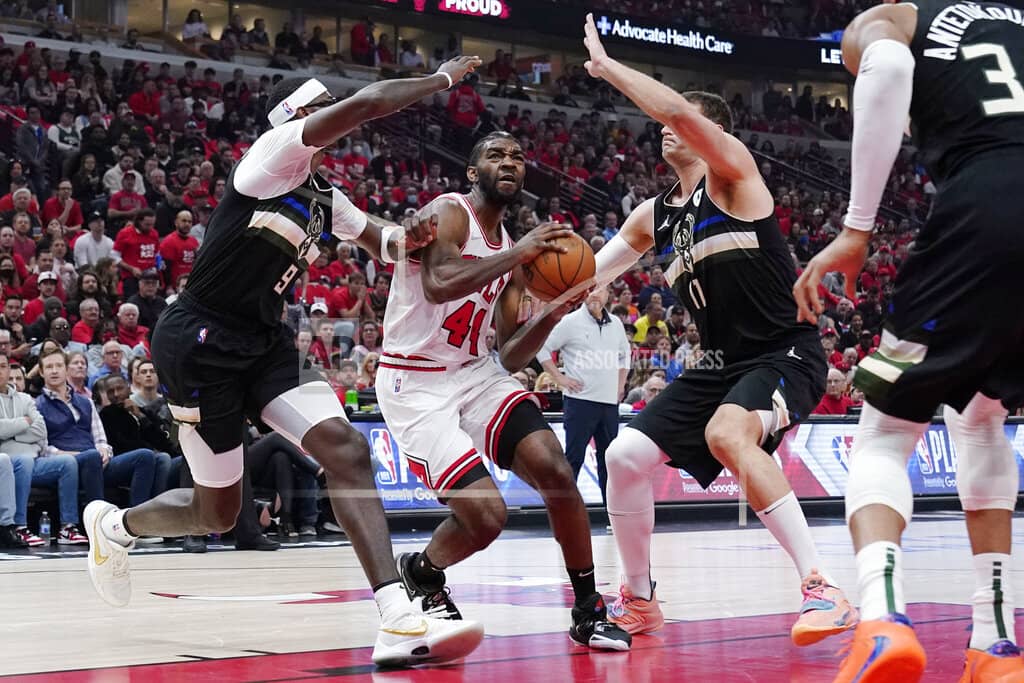 Bucks 119, Bulls 95 – Allen scores 27, Bucks beat Bulls 119-95 to take 3-1 lead
Grayson Allen set playoff career highs with 27 points and six 3-pointers, Giannis Antetokounmpo had 32 points and 17 rebounds and the Milwaukee Bucks beat the Chicago Bulls 119-95 to take a 3-1 lead in their first-round series. The Bucks made it look easy again after beating the Bulls by 30 and handing them the most lopsided home playoff loss in franchise history. The defending NBA champions led by 22 early in the third quarter and steadied themselves after a push by Chicago. They’ll try to wrap up the series in Milwaukee on Wednesday night. Zach LaVine led the Bulls with 24 points and 13 assists.

Rockies 6, Tigers 2 – Grichuk, Blackmon lead Rockies to 6-2 win over Tigers
Randal Grichuk had three hits, including his first home run of the season, and the Colorado Rockies beat the Detroit Tigers 6-2. A day after getting his 3,000th hit, Tigers star Miguel Cabrera didn’t play. He got three hits in a doubleheader split Saturday, raising his career hit total to 3,002. Charlie Blackmon had four hits, scored twice and drove in two runs for Colorado. Chad Kuhl again pitched well for his new team, allowing one run and four hits in six innings. He walked two and struck out four and has a 1.10 ERA in three starts for the Rockies.

Twins 6, White Sox 4 – F/10 – Buxton’s 2nd HR, 469-foot shot, lifts Twins over ChiSox 6-4
Byron Buxton hit his second homer of the game, a 469-foot, three-run drive that overcame a 10th-inning deficit and lifted the Minnesota Twins over Chicago 6-4 andsent the White Sox to their seventh straight loss. Buxton hit a two-run, opposite-field homer to right in the seventh against Aaron Bummer that tied the score 3-3. After Yasmani Grandal’s RBI single in the 10th off Joe Smith (1-0), Liam Hendriks (0-2) walked José Godoy with one out in the bottom half and Buxton drove a fastball into the left-field second deck for the longest game-ending home run since MLB Statcast starting tracking in 2015.

Pirates 4, Cubs 3 – Peters shines as Pittsburgh Pirates beat Chicago Cubs 4-3
Dillon Peters keyed a solid performance by Pittsburgh’s bullpen and Kevin Newman had two hits to help the Pirates beat the Chicago Cubs 4-3. Peters pitched 2 2/3 scoreless innings in relief of JT Brubaker and allowed one hit while running his season-opening scoreless streak to 10 1/3 innings over five appearances. Chicago lost for the fifth time in six games overall — even the day after it collected 23 hits during a historic romp. Ian Happ hit his 1st homer of the season for the Cubs.

Today
Cubs, Tigers, and White Sox are off today

MLB – White Sox put Eloy Jiménez on 10-day IL; likely out longer
The Chicago White Sox have placed outfielder Eloy Jiménez on the 10-day inured list with a right hamstring strain. The injury is expected to cause him to miss six to eight weeks. He is scheduled to have an extensive exam Monday in Chicago, with an update provided Tuesday when the White Sox open a seven-game homestand. Jiménez is hitting .222 with a home run and seven RBIs in 11 games this season. A ruptured left pectoral tendon limited him to 55 games last season.  Chicago now has eight players on the injured list.

MLB – Cubs RHP Alec Mills feeling good after rehab start
Whenever Alec Mills makes it back to the Chicago Cubs, he plans to be ready for whatever manager David Ross needs from him. Mills is rehabbing a low back strain that landed him on the 10-day injured list on opening day. The veteran right-hander pitched three innings in a rehab start with Triple-A Iowa on Saturday, allowing three runs and eight hits.

Red Wings 3, Devils 0 – Nedeljkovic makes 17 saves, Red Wings blank Devils 3-0
Alex Nedeljkovic had 17 saves, Oskar Sundqvist and Tyler Bertuzzi each had a goal and assist and the Detroit Red Wings beat the New Jersey Devils 3-0. The win snapped a two-game losing streak for the Red Wings and came a day after they were blown out by the Pittsburgh Penguins 7-2. Sundqvist scored in the first period and Bertuzzi and Michael Rasmussen added late empty-net goals. New Jersey goaltender Andrew Hammond made 21 saves as the Devils lost their seventh straight game at home.

NASCAR – Sneaky Chastain gets Talladega win
Ross Chastain took the lead near the checkered flag at Talladega Superspeedway to steal his second career NASCAR Cup Series victory.  Chastain simply stayed in line over the final few laps as leader Erik Jones and reigning Cup champion Kyle Larson fought for the win. Larson made his attempt on the final lap and Jones moved for the defensive block.  Chastain just pointed his Chevrolet straight, slipped past the leaders and won for the second time in five races. Austin Dillon finished second for Richard Childress Racing in a 1-2 sweep for Chevrolet. Kyle Busch was third, followed by Larson and Martin Truex Jr.

Golf – PGA – Cantlay-Schauffele complete record win
Patrick Cantlay and Xander Schauffele held off Sam Burns and Billy Horschel by two strokes in a record-setting, wire-to-wire victory in the Zurich Classic of New Orleans. Cantlay and Schauffele closed with an even-par-72 in the alternate-shot final round to finish at 29-under 259. That broke the tournament mark set by Kevin Kisner-Scott Brown and Jonas Blixt-Cameron Smith in 2017, the first year the event was played as a team event. Cantlay and Schauffele opened with a record 59 in best-ball play Thursday, and began Sunday at 29 under after shattering the 54-hole record of 23 under.

Golf – Champions – Parel gets playoff win
Scott Parel parred the first playoff hole to capture the ClubCorp Classic, his second PGA Tour Champions title. Parel two-putted for birdie on the par-5 18th hole for a 6-under 65 and won a three-man playoff over Steven Alker and Gene Sauers, who both went into the hazard on the closing hole and failed to make par.  Sauers birdied his last two holes in regulation for a 63.