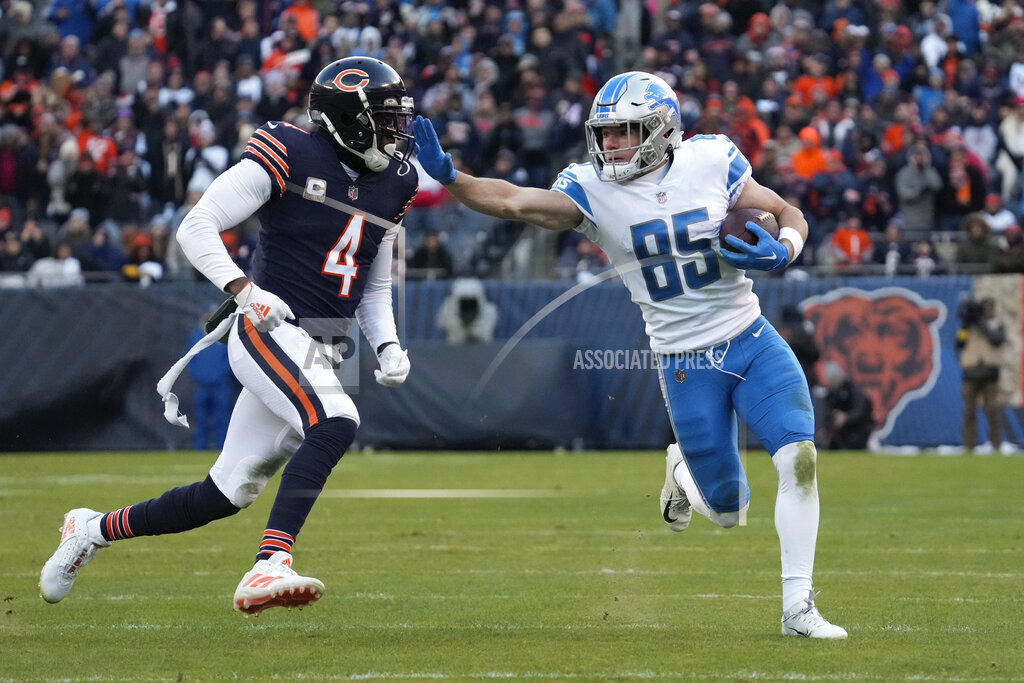 Lions 31, Bears 30 – Lions overcome big effort by Fields, beat Bears 31-30
Jamaal Williams scored on a 1-yard run in the closing minutes, Jared Goff threw for 236 yards and a touchdown, and the Detroit Lions overcame another spectacular effort by Chicago’s Justin Fields to beat the Bears 31-30. The Lions scored 21 points in the fourth quarter on the way to their second straight win after losing five in a row. They wiped out a 14-point deficit with two quick TDs, tying it on a 20-yard interception return by Jeff Okudah. Fields then went 67 yards untouched for a TD to put Chicago back on top 30-24. Cairo Santos missed the extra point. Goff led an eight-play, 91-yard drive in the closing minutes. Williams made it 31-30 when he scored with 2:21 remaining. Fields ran for 147 yards and two scores and threw for two.  According to STATS, Chicago became the first team in NFL history to score at least 29 points in three consecutive games and lose all three. The Bears have dropped six of seven overall.

Colts 25, Raiders 20 – Matt Ryan, interim coach Saturday rally Colts past Raiders
Matt Ryan got his job back as the Colts’ starter under TV analyst-turned-interim coach Jeff Saturday. The veteran quarterback delivered a 35-yard touchdown pass to Parris Campbell to lead Indianapolis to a 25-20 victory over the Las Vegas Raiders. The touchdown with 5:07 left came shortly after the 37-year-old quarterback converted a third-and-3 with a 39-yard run to the Raiders’ 36-yard line. His play helped give Saturday his first victory. It also handed the Raiders their third loss in a row and will increase the scrutiny on first-year coach Josh McDaniels.

Notre Dame 88, Youngstown State 81 – Goodwin scores 20, Notre Dame defeats Youngstown State 88-81
Dane Goodwin scored 20 points to lead all five starters in double figures and Notre Dame held off Youngstown State 88-81. The Fighting Irish led 70-69 before Trey Wertz, Goodwin and J.J. Starling all scored at the rim to give them a seven-point lead that they were able to milk over the final 3 minutes. Starling hit a big 3-pointer that gave the Irish a 79-73 lead with about two minutes remaining. Less than a minute later, Starling hit another 3-pointer for an 82-75 advantage. Notre Dame led for the final 35 minutes but never by more than 10 points. Adrian Nelson had 27 points and 10 rebounds to lead the Penguins.

Valpo 81, WMU 65 – Valparaiso earns 81-65 win over Western Michigan
Ben Krikke had 28 points in Valparaiso’s 81-65 victory over Western Michigan. Krikke was 13 of 24 shooting, including 0 for 3 from distance, and went 2 for 5 from the line for the Beacons. Kobe King scored 26 points while shooting 9 for 13 and 5 of 5 from the free throw line. Quinton Green added 10 points. The Broncos were led by Lamar Norman Jr., who recorded 25 points. Tray Maddox Jr. added 16 points for Western Michigan. In addition, Markeese Hastings finished with six points.

NCAAFB – No. 1 UGA leads unchanged top 5; Ducks, UCLA slip
No. 1 Georgia leads an unchanged top five in The Associated Press college football poll. The rest of the Top 25 has been shuffled around after eight ranked teams lost. The Bulldogs received all but one of the 63 first-place votes in the AP Top 25 for the second straight week. No. 2 Ohio State received the other first-place vote. No. 3 Michigan, No. 4 TCU and No. 5 Tennessee held their spots after victories Saturday, with only the Horned Frogs facing a real challenge. Oregon losing at home to Washington and UCLA losing at home to Arizona has shaken up the rest of the top 10.

Nuggets 126, Bulls 103 – Porter’s 31 points lead Nuggets past Bulls 126-103
Michael Porter Jr. scored a season-high 31 points to lead the Denver Nuggets to a 126-103 victory over the Chicago Bulls. Porter made 11 of 16 shots, including six 3-pointers. Nuggets center Nikola Jokic equaled his season high with 14 assists despite not playing the entire fourth quarter, and Jamal Murray added 23 points. Bulls leading scorer DeMar DeRozan didn’t take his first shot until midway through the second quarter but finished with 16 points. Zach LaVine led the Bulls with 21 points. The Bulls trailed 43-39 before the Nuggets embarked on a 19-8 run to close out the first half. Andre Drummond became the 52nd center in NBA history and the eighth Bulls center to reach the 10,000-point mark.

FIFA – Pugh scores game-winner in 2-1 US victory over Germany
Mallory Pugh scored the go-ahead goal in the 56th minute and the U.S. women avoided a fourth straight loss with a 2-1 come-from-behind victory over Germany on Sunday. Sophia Smith also scored for the top-ranked United States, which went into the match at Red Bull Stadium with its first three-game losing streak since 1993. Germany had defeated the United States 2-1 on Thursday in Fort Lauderdale, Florida. That loss snapped a 71-game unbeaten streak for the United States on home soil, stretching back to a loss to Australia in July 2017.

Golf – PGA – Finau sails to 4-shot victory in Houston, 3rd win of year
Tony Finau has won the Houston Open and it was never in doubt. For a guy who once had a hard time winning, this one was easy. Finau had a four-shot lead going into the final round. He led by as many as eight shots along the back nine. Finau shot a 69 and won by four shots over Tyson Alexander. Finau won for the third time this year. He now has four PGA Tour victories in his last 30 starts. He won only one time in his first 185 starts on the PGA Tour.

Golf – LPGA – Nelly Korda rallies to win Pelican and returns to No. 1
Nelly Korda’s first LPGA Tour victory of the year is taking her back to No. 1 in the world. Korda won the Pelican Women’s Championship after a duel with Lexi Thompson. Korda pulled ahead with two late birdies and shot 64. Thompson couldn’t catch her. Korda was emotional after her round because it’s been a tough year. She missed four months with a blood clot in her left arm and has struggled to regain her form. But she won the Pelican Women’s Championship for the second straight year. And she is No. 1 again. That’s where she started the year.

MHSAA – Niles new football field finally completed
Fans of the Niles football team have had a long road this season. The 2022 football season was played entirely on the road this fall as Viking Stadium was being converted from a grass playing field to artificial turf.  Construction on the field didn’t start until August, which made it impossible for the Vikings to play any games at home this season.    Niles had four home games scheduled, their game against Buchanan was played at Berrien Springs new Sylvester Stadium.  Games against Vicksburg and Dowagiac were played at Steve Upton Field at Dickinson Stadium in St. Joe. And the Vikings homecoming game against Paw Paw was actually played at Falan Field in Paw Paw.  But a week after the Vikings were eliminated from the 2022 football playoffs, Niles field is finally complete.   Even though there aren’t any upcoming football games for the community to celebrate it’s unveiling. Niles is hosting a community celebration on Thursday, November 17 at 4:30 p.m.   A ribbon cutting for the Niles High School Sports and Competition Field at Viking Stadium will be held at 4:30, then the field will remain open for the community to view the new field.  The new field is lined for both football and soccer.  It’s unknown if the Niles girls soccer team will be opening up the spring season on the new field or not.  We do know that the first official football game will be on the opening week of the 2023 season against St. Joseph.

Division 7
Jackson Lumen Christi 7, Lawton 6
Lawton finishes the season with a record of 9-3