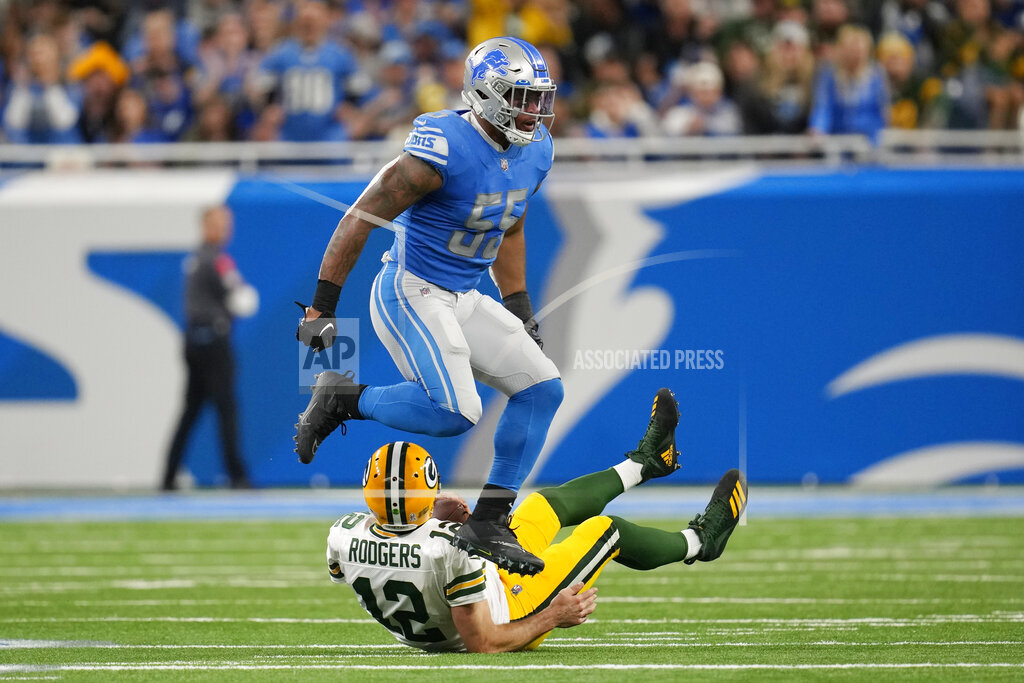 Lions 15, Packers 9 – Rodgers throws 3 INTs, Lions hold on to beat Packers 15-9
Aaron Rodgers matched a career high with three interceptions and threw an incomplete pass on fourth down from the Detroit 17 in the final minute, letting the Detroit Lions hold on for a 15-9 win over the Packers in a matchup of slumping teams on Sunday. The Lions ended a five-game losing streak. The Packers have lost five straight for the first time since 2008 when their four-time NFL MVP was a first-year starter with the franchise.

Dolphins 35, Bears 32 – Tua, Dolphins outlast Bears on Fields’ record rushing day
Tua Tagovailoa threw for three touchdowns, Tyreek Hill had 143 yards receiving and the Miami Dolphins overcame a record-setting rushing effort by Justin Fields to beat the Chicago Bears 35-32. In a game where neither team did much to stop the other, the Dolphins had no trouble moving the ball against a gutted defense and made enough plays to come away with their third straight win. Fields ran for 178 yards, the most by an NFL quarterback in a regular-season game. He had a 61-yard touchdown run and threw for three scores. But it wasn’t enough for the Bears, who lost for the fifth time in six games.

Patriots 26, Colts 3 – Pats get 9 sacks in dominant 26-3 victory over Colts
Mac Jones had a touchdown pass, Nick Folk added four field goals and the Patriots finished with nine sacks to help New England beat the Indianapolis Colts 26-3. The win moves the Patriots (5-4) above .500 for the first time this season as they head into their bye week. Linebackers Matt Judon and Josh Uche each had three sacks, leading a defense that held Indianapolis to 121 yards and 0-for-14 on third down. Jones was 20 of 30 for 147 yards. The Colts have lost three straight and have yet to earn a win since benching QB Matt Ryan in favor of second-year player Sam Ehlinger.

Red Wings 3, Rangers 2 – OT – Kubalik’s overtime goal lifts Red Wings past Rangers 3-2
Dominik Kubalik scored a power-play goal 2:43 into overtime and the Detroit Red Wings rallied to beat the New York Rangers 3-2 on Sunday. Matt Luff and Pius Suter scored in the second period as Detroit came back after trailing 2-0 in the first period. Moritz Seider had two assists and Alex Nedeljkovic stopped 27 shots in the Red Wings’ third straight win. Kaapo Kakko and Mika Zibanejad scored in the first to give the Rangers the lead. Jaroslav Halak had 33 saves while falling to 0-3-1 in four starts this season.

Raptors 113, Bulls 104 – VanVleet has 30 points and 11 assists as Raptors beat Bulls
Fred VanVleet returned from injury with season-highs of 30 points and 11 assists, Scottie Barnes had 19 points and 10 rebounds, and the Toronto Raptors overcame the absence of leading scorer Pascal Siakam to beat the Chicago Bulls 113-104. VanVleet returned after missing three games because of a sore lower back. O.G. Anunoby scored 22 points, Gary Trent Jr. had 12 and Christian Koloko added a career-high 11. Nikola Vucevic had 18 points and 12 rebounds, Alex Caruso had 11 rebounds and 11 assists and DeMar DeRozan scored 20 points for the Bulls, who lost their second straight.

NCAAFB – AP Top 25: Georgia has No. 1 on lock, ‘Bama drops to No. 10
Georgia has tightened its hold on No. 1 in The Associated Press college football poll. TCU climbing up to No. 4 and Alabama dropping all the way to No. 10. The Bulldogs had their strongest support of the season after manhandling Tennessee in a 1-2 matchup. Georgia received 62 of 63 first-place vote, No. 2 Ohio State got the other. Michigan moved up a spot to No. 3 and TCU jumped three spots to its highest ranking since late in the 2017 season. No. 5 Tennessee fell three spots after losing on the road to the defending national champions.

NASCAR – Joey Logano wins at Phoenix to earn 2nd NASCAR championship
Joey Logano won his second NASCAR championship to give Roger Penske two titles in the same season with a victory in Sunday’s winner-take-all finale at Phoenix Raceway. It was the fourth win of the season for Logano. Will Power added the IndyCar championship to the Team Penske trophy case in September and Logano’s dominating run Sunday marked the first time Penske has won both the NASCAR and IndyCar championship in the same season. It is the third Cup championship for Penske, who won with Brad Keselowski in 2012 and Logano’s first title in 2018. Logano joined Kyle Busch as the only active drivers with multiple Cup titles.

NASCAR – JGR co-owner Coy Gibbs, 49, dies hours after son wins title
Coy Gibbs, the vice chairman at Joe Gibbs Racing for his NFL and NASCAR Hall of Fame father, died Sunday morning. He was 49. His death came just hour after his son Ty won the Xfinity Series championship. JGR says in a statement that Gibbs died in his sleep. Joe Gibbs has now lost both of his sons in the last three years. J.D. Gibbs died in 2019 of degenerative neurological disease and also was 49. Coy Gibbs succeeded his older brother as vice chairman of the family-run NASCAR organization.

Golf – PGA – Henley coasts to 4-shot PGA Tour victory in Mayakoba
Russell Henley is the winner of the World Wide Technology Championship at Mayakoba. That was to be expected because Henley had a six-shot lead going into the final round. He shot 70 to win by four. Henley was never under any stress. He did make his first bogey of the tournament on the fifth hole. His lead was down to three. And then he birdied the next three holes. Brian Harman shot 66 to finish second. Masters champion Scottie Scheffler had a 62 and that gave him a tie for third. Henley won for the first time in five years.

Golf – Champions – Langer wins 44th on Champions to get within one of record
Bernhard Langer keeps breaking is own record as the oldest PGA Tour Champions winner. The 65-year-old German won the TimberTech Championship for his second win this year, and the 44th of his career. That leaves Langer one win away from tying the Champions record held by Hale Irwin. Langer shot a 66 in the final round to win by six shots over Paul Goydos and Thongchai Jaidee. The season ends next week with the Charles Schwab Cup Championship. Steven Alker leads. Padraig Harrington is the only player with a remote chance of catching him for the $1 million prize.

Division 4 at Michigan Lutheran
Our Lady of the Lake 3, River Valley 1