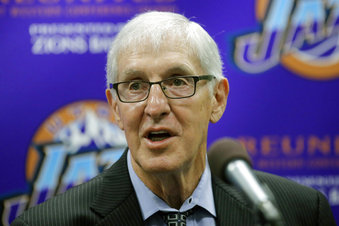 Hall of Fame basketball coach and former Chicago Bulls legend Jerry Sloan has passed away. His death was announced by the Utah Jazz, the team he took to the NBA Finals in 1997 and 1998. The Jazz say he died Friday from complications related to Parkinson’s disease and Lewy body dementia. Sloan spent 23 seasons coaching the Jazz, and the team finished below .500 in only one of those years. Sloan won 1,221 games in his career, the fourth-highest total in NBA history. During his playing career with the Bulls, he was a two time All-Star and a four time All-Defensive First Team member. In his ten years in Chicago, he averaged 14.7 points, 7.7 rebounds, 2.6 assists, and 2.2 steals per game. Jerry Sloan was 78 years old.