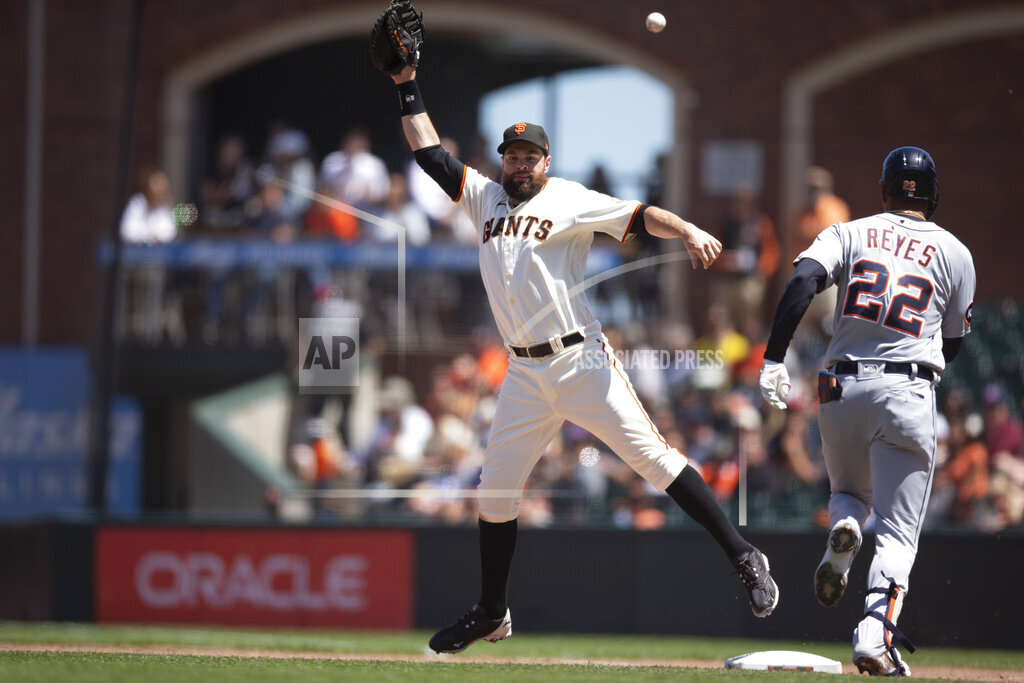 Tigers 3, Giants 2 – Haase’s two-run HR allows Tigers to hold off Giants 3-2
Eric Haase hit a two-run homer to break a 1-all tie in the sixth inning and the Detroit Tigers held on to beat the San Francisco Giants 3-2. It was Haase’s fifth home run of the season and his second in the last three games. Miguel Cabrera also drove in a run for the Tigers, who improved their league-worst road record to 11-23 and split the two-game series. Rony García won his third consecutive start for Detroit. Gregory Soto pitched a perfect ninth for his 15th save in 17 opportunities. Evan Longoria had a first-inning home run for the Giants. San Francisco starter Alex Wood fanned six in 5 2/3 innings but took the loss.

Angels 4, White Sox 1 – Ohtani Ks 11, extends scoreless streak in 4-1 win over WSox
Shohei Ohtani extended his scoreless streak to 21 2/3 innings while pitching five-hit ball into the sixth with 11 strikeouts in the Los Angeles Angels’ 4-1 victory over the Chicago White Sox. Luis Rengifo hit a two-run homer and Mike Trout had an early RBI double as the Angels finished their disappointing nine-game homestand on a positive note because of their two-way superstar’s work on the mound. Ohtani yielded five singles and a walk while winning his fourth consecutive start. The AL MVP hasn’t allowed a run since the fifth inning of his brilliant outing at Boston’s Fenway Park.

Cubs 8, Reds 3 – Contreras homers, Morel also goes deep as Cubs beat Reds 8-3
Willson Contreras homered, Christopher Morel also went deep and nailed a runner at the plate with a terrific throw from center field, and the Chicago Cubs beat the Cincinnati Reds 8-3. Contreras got hit by a pitch and scored on a double by Ian Happ against Hunter Greene in the first inning. He made it 5-0 in the fifth when he lined a two-run drive against Luis Cessa for his 13th homer — tops among major league catchers — and also doubled twice. Morel helped Justin Steele escape a bases-loaded jam in the fourth when he caught Donovan Solano’s line drive and fired a one-hop laser to the plate. Morel added a two-run homer in the sixth. Cincinnati has lost 9 of 12.

MLB – St. Pete mayor reopens talks on future of Rays stadium site
The mayor of St. Petersburg, Florida, is reopening talks about the future of the Tropicana Field site where baseball’s Tampa Bay Rays play their home games. Mayor Ken Welch said Wednesday that two previous proposals for the 86-acre downtown location are being scrapped, with a new round of plans to be solicited beginning in mid-August. Welch, St. Petersburg’s first Black mayor, has made a priority out of including such things as affordable housing and greater job opportunities along with Rays baseball. Welch said the goal is to choose a new redevelopment plan by year’s end. The Rays’ lease is up in 2027 and Welch said the new plan will include a stadium at the site.

NBA – AP source: Harden declines $47M option with Philadelphia
James Harden is taking less with hopes the Philadelphia 76ers can do more. A person familiar with the situation said Harden chose not to exercise his $47.4 million option for next season and will become a free agent — but with no designs on leaving Philadelphia. Harden made the decision to allow the 76ers the flexibility they need to sign other players this summer.

NBA – NBA Finals viewership up 24 percent over 2021
The Nielsen company says the NBA Finals series between two stories franchises reached 24% more viewers than the 2021 Finals. Nearly 14 million people watched the Golden State Warriors clinch its fourth championship since 2015 with a Game 6 victory over the Boston Celtics, the franchise with the most NBA titles overall. The series as a whole averaged 12.3 million viewers, beating the 9.91 million who watched 2021’s Milwaukee-Phoenix series. The first game of hockey’s Stanley Cup Finals between Colorado and Tampa Bay was seen by 4.2 million people. All of these sports events were seen on ABC, leading the network to an easy win in the weekly ratings.

NCAAMBB – Emoni Bates says he’s transferring to hometown E. Michigan
One of the top recruits in the 2021 men’s basketball recruiting class says he’s transferring from Memphis to Eastern Michigan. Emoni Bates announced on Instagram he’s returning to his hometown of Ypsilanti to play for the Eagles of the Mid-American Conference. An EMU spokesman said he could not confirm Bates’ transfer. Bates averaged 9.8 points and 3.3 rebounds per game his freshman season at Memphis and started 13 of 18 games. He missed 15 games because of a back injury before appearing in the Tigers’ two NCAA Tournament games.

NCAAMBB – Williams, Calhoun, Beilein among coaches headed to college hoops Hall
Roy Williams and Jim Calhoun will join John Beilein and Lon Kruger in a star-studded cast of coaches that will be inducted into the National College Basketball Hall of Fame in November. Coach Jerry Krause of Eastern Washington will join the quartet. The players to be inducted are Richard Hamilton of UConn, Larry Miller of North Carolina, Frank Selvy of Furman and Jimmy Walker of Providence. The date of the induction ceremony has not been announced, but it typically coincides with the Hall of Fame Classic, which is set for November 21-22 in Kansas City, Missouri.

Sky 91, Sun 83 – Parker’s 25 points, 11 rebounds lead Chicago past Sun 91-83
Candace Parker had a season-high 25 points, 11 rebounds and seven assists, Kahleah Copper scored 15 points and Chicago beat the Connecticut Sun 91-83 for the Sky’s fourth straight victory. Parker made a no-look pass to Kahleah Copper with 33.5 seconds left before halftime to become the eighth player in WNBA history to reach 1,500 career assists. Parker is the only player in WNBA history to eclipse 6,000 points, 3,000 rebounds and 1,500 assists in a career. Allie Quigley added 13 points for Chicago. Jonquel Jones had 24 points, 11 rebounds and five steals for her sixth double-double of the season for Connecticut.

Mercury 99, Fever 78 – Mercury beat Fever for 7th straight time, 99-78
Skylar Diggins-Smith had 17 points and seven assists, Sophie Cunningham added 14 points and the Phoenix Mercury beat the Indiana Fever 99-78. Phoenix beat Indiana for a seventh straight time, including an 83-71 victory on Monday. Shey Peddy and Diamond DeShields each added 13 points for Phoenix, which has won three straight games. Brianna Turner had 11 points and 11 rebounds and Diana Taurasi also scored 11. The Mercury had a season-high 29 assists on 38 made field goals. Phoenix built a 49-43 lead by halftime behind 28 combined points from Diggins-Smith, Cunningham and Peddy. Kelsey Mitchell scored 14 of her 21 points in the first half for Indiana. Victoria Vivians added 13 points.

NHL – Challenge accepted: Richardson steps in as Blackhawks coach
Luke Richardson says he likes a challenge. Good thing, because he’s got a big one ahead of him. The rebuilding Chicago Blackhawks have hired Richardson as the 40th coach in franchise history. The former NHL defenseman takes over a team in transition under general manager Kyle Davidson, one that has fallen on hard times since it won the franchise’s sixth Stanley Cup championship in 2015. Richardson was an assistant on Montreal’s coaching staff for the previous four seasons. When Dominique Ducharme was diagnosed with COVID-19 during the 2021 playoffs, Richardson helped lead the Canadiens to their first Stanley Cup Final since 1993.

Hockey – 3-on-3 hockey league launches, could be step toward Olympics
Hockey is not on summer vacation even after the Colorado Avalanche dethroned the Tampa Bay Lightning to win the Stanley Cup. The new 3ICE 3-on-3 league debuted in mid-June with Hall of Famers Bryan Trottier, Grant Fuhr, Joe Mullen and Larry Murphy among the coaches. The International Ice Hockey Federation and IOC have discussed the possibility of bringing 3-on-3 to the Olympics for another medal event. That happened with basketball at the Tokyo Games. Leaders at 3ICE are focused on getting the league off the ground.

Tennis – Wimbledon – 2-time Wimbledon champ Murray loses to Isner in 2nd round
Two-time Wimbledon champion Andy Murray has lost in the second round to big-serving American John Isner. It is Murray’s earliest loss in 14 appearances at the All England Club. No. 3 seed Casper Ruud also lost in the second round Wednesday, just weeks after being the runner-up to Rafael Nadal at the French Open. Prior to Murray vs. Isner, the host country’s other leading player, reigning U.S. Open champion Emma Raducanu, was eliminated by Caroline Garcia of France 6-3, 6-3.

NFL – NFL insists on indefinite suspension at Watson hearing
The NFL and Deshaun Watson’s legal team presented their arguments before a disciplinary officer for a second day with both sides holding firm as the hearing is scheduled to continue in Delaware on Thursday. The league is insisting on an indefinite suspension and Watson’s side is arguing there’s no basis for a punishment that significant, two people in attendance told The Associated Press. Former U.S. District Judge Sue Robinson, who was jointly appointed by the league and the NFL Players’ Association, is tasked with determining whether Watson violated the NFL’s personal conduct policy and whether to impose discipline.

Golf – LIV – Sept. 11 families plan protest as LIV tees off in Oregon
LIV Golf’s first U.S. event was set to begin Thursday, with a group of survivors and families who lost loved ones in the Sept. 11 terror attacks planning to gather at a nearby park to speak out against the Saudi Arabia-funded tour. The families are speaking out because of what they say are the Saudi connections to the tragic event in 2001. Fifteen of the 19 hijackers on Sept. 11 were Saudi citizens.

FIFA – FIFA to put more World Cup tickets up for online sale
FIFA will put more World Cup tickets up for sale next week on a first-come, first-served basis. Soccer’s governing body said Wednesday that a total of 1.8 million tickets for the World Cup in Qatar have already been sold ahead of the next sales round, which opens Tuesday on the FIFA website. The tournament is being played from Nov. 21 to Dec. 18. The cheapest tickets for fans from outside Qatar are priced at 250 Qatari riyals ($69). The tournament has a total capacity of about 3 million tickets, with about 2 million placed on general sale and 1 million allocated for FIFA stakeholders such as member federations and sponsors, plus hospitality programs.

Olympics – Stolen Olympic gold medal found in Southern California
Authorities say a stolen Olympic gold medal belonging to a member of the 2020 U.S. Women’s Volleyball Team has been found in Southern California. Olympian Jordyn Poulter reported the medal stolen May 25 after she discovered her car broken into at a parking garage in Anaheim. Detectives later arrested a suspect in the theft, but weren’t immediately able to locate the missing medal. On Monday, the owners of an Anaheim barbershop reported finding the gold medal inside a plastic bag discarded outside their business. They handed it over to police, who plan on returning it to Poulter.