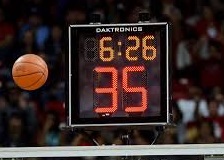 A proposal that would establish a 35-second shot clock for boys and girls basketball around the country has been voted down by the National Federation of State High School Associations, the organization that establishes rules for all high school sports.
Many high school coaches and fans have been in favor of a shot clock for years and it has become even more of a hot topic recently. The association’s basketball rules committee, as a whole, is not against the shot clock. The group continually examines the pros and cons of instituting a shot clock.
Critics of a shot clock at the high school level point to money as a reason for not instituting it, especially with athletic budgets being as tight as they are these days.

Notre Dame received some needed secondary help, and it comes from a former opponent.
Monday afternoon, graduate transfer cornerback Nick McCloud, who comes from N.C. State, announced he’s committed to play for the Irish. McCloud missed most of last season due to injury, but made 18 starts at NC State from 2017-18. He has one year of eligibility left. In his four years with the Wolfpack, McCloud had 105 tackles, 20 pass breakups and three interceptions.

Some Pac-12 football coaches are pitching an NCAA-mandated uniform start to the season. Washington coach Jimmy Lake said in a video conference with reporters that he would prefer for all major college teams to begin six weeks of preparation for the season at the same time. Colorado coach Karl Dorrell and Utah’s Kyle Whittingham backed Lake’s idea. Teams would need to begin conditioning and practice in mid-July for the season to start on time around Labor Day weekend, when Washington is scheduled to host Michigan. But there are complications with states taking different approaches to fighting the coronavirus pandemic.

In a cost cutting move, the Mid-American Conference is eliminating postseason tournaments in eight sports. Those sports include baseball and softball. Also, men’s and women’s basketball are among nine sports that will have postseasons scaled back.
Men’s and women’s soccer, women’s lacrosse, field hockey, and men’s and women’s tennis will also have their postseason tournaments eliminated. In those sports that will no longer have a postseason, champions will be determined based on regular season results.
Men’s and women’s basketball regular season schedules will now include 20 conference games. The conference tournaments will only include the top eight teams in the final regular-season standings. Also, on-campus opening round tournament games will be eliminated.
The moves are in response to the financial crisis being brought on by the coronavirus pandemic. The conference says these changes cover the next four seasons. After four seasons, they will reevaluate the situations as the economic situation stabilizes.

Arizona Gov. Doug Ducey has opened the door for professional sports to return to the state. Ducey said on Tuesday that professional sports, including MLB, NBA, NHL and NFL can resume without fans on Saturday. The state is slowly starting to reopen during the ongoing coronavirus pandemic.

Offensive lineman Danny Pinter has become the first of Indianapolis’ nine draft picks to sign his rookie contract. The 6-foot-4, 306-pound Ball State alum was selected in the fifth round last month, No. 149 overall. Pinter played high school and college football in Indiana and now will have a chance to play in the NFL with his home-state team. Pinter signed a four-year deal worth roughly $3.6 million.

A person familiar with the results of poll of NBA players taken by their union says there would be “overwhelming” support for any plan that has this season resuming in a safe way amid the coronavirus pandemic.
The poll conducted by the National Basketball Players Association was informal but gave a clear sense that players would like to not only get to the playoffs but also resume at least some of the regular season, according to the person who shared details with The Associated Press on Tuesday on condition of anonymity because it was not to be detailed publicly.
The NBA suspended its season on March 11 with 259 regular season games remaining. Players have been paid in full on each of the four paydays that have followed, though that will change Friday when most of the league sees a 25% reduction in their paycheck.
Players stand to lose roughly $850 million in gross salary if the regular season is not resumed and the NBA exercises its right to withhold roughly 1.08% of each player’s salary for any game that is ultimately canceled.

NBA commissioner Adam Silver says a decision on whether to resume the season or not will come in two to four weeks. A format of the schedule reportedly remains undecided. Reports also indicate that the NBA is not optimistic that quick-response testing will be widely accessible by the end of Silver’s timetable.