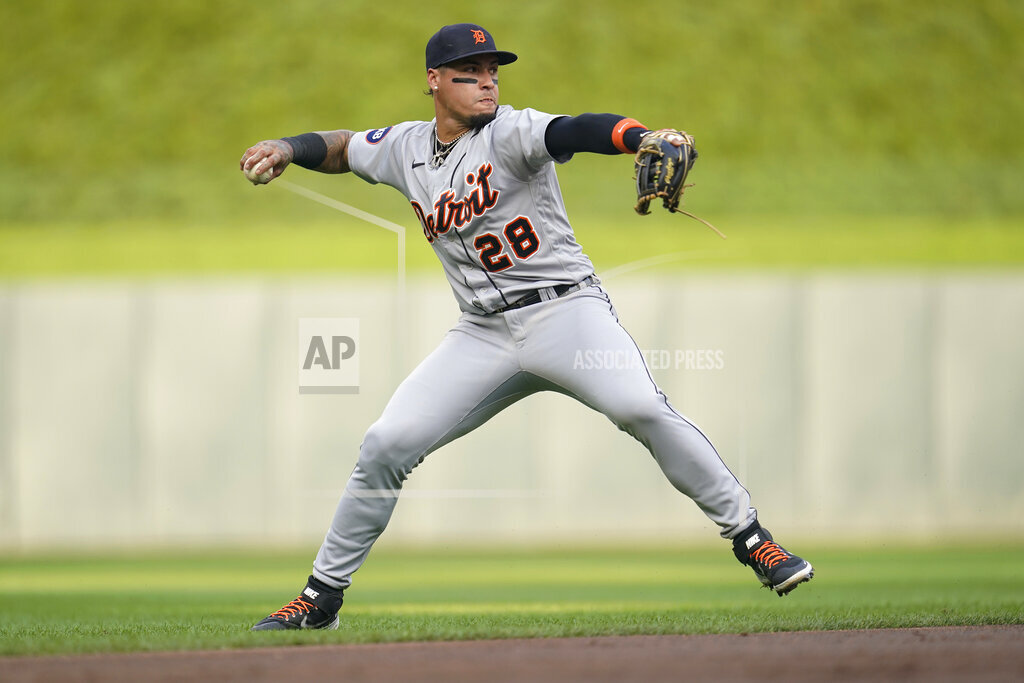 Tigers 5, Twins 3 – Tigers top Twins 5-3 after Minnesota’s flurry of trade deals
Riley Greene had two hits and two RBIs as the Detroit Tigers spoiled Minnesota’s big trade deadline day, beating the Twins 5-3. Jason Foley (1-0) earned his first career win with a scoreless inning in relief of starter Matt Manning, who was activated off the 60-day injured list before the game after missing three months with right shoulder inflammation. Gregory Soto earned his 20th save. Griffin Jax (5-3) allowed three runs in 1/3 inning of relief. Mark Contreras hit his first career homer for the Twins, who have lost five of seven.

White Sox 9, Royals 2 – Jiménez drives in 4, Abreu homers, White Sox beat Royals 9-2
Eloy Jiménez had three hits and four RBIs, José Abreu homered and the Chicago White Sox pounded the Kansas City Royals 9-2. The White Sox made no major moves prior to the trade deadline and will bank on improvement from within as they try to overtake Minnesota and Cleveland to win their second straight AL Central championship. This one wasn’t exactly pristine, but the White Sox will take the lopsided win. Jiménez singled and scored in a three-run first inning and smacked a two-run double in the fourth to bump Chicago’s lead to 5-2. He added a long sacrifice fly in the sixth before Abreu chased Royals starter Brad Keller with a two-run homer making it 8-2.

Cardinals 6, Cubs 0 – Wainwright, reunited with Molina, hurls Cards past Cubs 6-0
Adam Wainwright pitched seven spotless innings with longtime catcher Yadier Molina back behind the plate, and the St. Louis Cardinals beat the Chicago Cubs 6-0. Paul Goldschmidt homered and drove in three runs to lead the St. Louis offense. Dylan Carlson hit a two-run shot and made a nice catch in center field. Nolan Arenado also went deep. Molina returned from knee inflammation that had sidelined him since June 16. He and Wainwright made their 317th career start as batterymates, passing the Boston/Milwaukee Braves duo of Warren Spahn and Del Crandall for sole possession of second place in major league history since 1901. The only pair in front is Mickey Lolich and Bill Freehan with 324 for the Detroit Tigers from 1963-75.

MLB – Contreras, Happ stay with Cubs after deadline passes
The Chicago Cubs are keeping All-Stars Willson Contreras and Ian Happ for now after Tuesday’s trade deadline passed with no deal for either. With the Cubs rebuilding and free agency looming, Contreras appeared destined to be traded. Fellow All-Star Happ also seemed like a good bet to be dealt. Contreras got a standing ovation in what many thought would be his final home game at Wrigley Field against Pittsburgh on July 26. Teammates hugged him following Sunday’s 4-0 loss at San Francisco, thinking that might have been his last game for the Cubs.

MLB – Twins stock up with starter Mahle, relievers López, Fulmer
The Minnesota Twins stocked up their sputtering pitching staff before Tuesday’s trade deadline. They acquired All-Star closer Jorge López from the Baltimore Orioles, starter Tyler Mahle from the Cincinnati Reds and reliever Michael Fulmer from the Detroit Tigers, giving up a total of eight prospects in three separate deals. The Twins took a one-game lead in the AL Central into their game on Tuesday. They have a 5.30 team ERA since the All-Star break.

MLB – Vin Scully, Dodgers broadcaster for 67 years, dies at 94
Hall of Fame broadcaster Vin Scully, whose dulcet tones provided the soundtrack of summer while entertaining and informing Dodgers fans in Brooklyn and Los Angeles for 67 years, died Tuesday night, the team said. He was 94. Scully died at his home in the Hidden Hills section of Los Angeles, according to the team, which spoke to family members. As the longest tenured broadcaster with a single team in pro sports history, Scully saw it all and called it all. He began in the 1950s era of Pee Wee Reese and Jackie Robinson.
WNBA – Women’s National Basketball Association
Tonight
Dallas Wings 84, Chicago Sky 78

WNBA – WNBA playoff picture still muddled, 2 weeks left in season
The WNBA playoff picture is still unclear with two weeks left in the regular season. Five teams have clinched postseason berths and only three games separating Chicago, Las Vegas and Connecticut at the top of the standings. Seattle and Washington also have earned a spot in the postseason and are tied for fourth and fifth. There are still six teams vying for the final three spots, setting up what should be an exciting finish to the regular season. Each of those six teams has at least one game left against the other teams in the group.

NBA – Bulls and Dragic finalize $2.9 million, 1-year contract
The Chicago Bulls and guard Goran Dragic have finalized a one-year, $2.9 million contract. The Bulls tweeted a welcome message in announcing the deal about a month after the two sides reached an agreement. The 36-year-old Dragic has averaged 13.7 points and shot 36.2% on 3-pointers over 14 seasons with Phoenix, Houston, Miami, Toronto and Brooklyn. From Slovenia, he made an All-Star team with the Heat during the 2017-18 season and helped them advance to the 2020 NBA finals. Dragic averaged 7.5 points while shooting 25.4% from beyond the arc last season for Toronto and Brooklyn.

NFL – NFL suspends Dolphins owner for tampering with Brady, Payton
The NFL has suspended Miami Dolphins owner Stephen Ross and fined him $1.5 million for tampering with Tom Brady and Sean Payton following a six-month investigation stemming from Brian Flores’ racial discrimination lawsuit against the league. The league’s investigation found the Dolphins did not intentionally lose games during the 2019 season but the team had impermissible communication with Brady and his agent, Don Yee. The Dolphins will forfeit a first-round selection in the 2023 draft and third-round selection in the 2024 draft. Ross is suspended through Oct. 17. He may not be present at the team’s facility and may not represent the club at any team or NFL event.

NFL – Art McNally set to become 1st NFL official in Hall of Fame
The NFL finally will have an on-field official in the Pro Football Hall of Fame. Former referee Art McNally will be inducted into the Hall after a decades-long career starting as an on-field official and continuing as the head of officiating for the league. McNally was instrumental in modernizing and standardizing officiating. His use of film to teach and evaluate and a grading system is still mostly in use today and is credited for helping improve the way games have been called over the years.