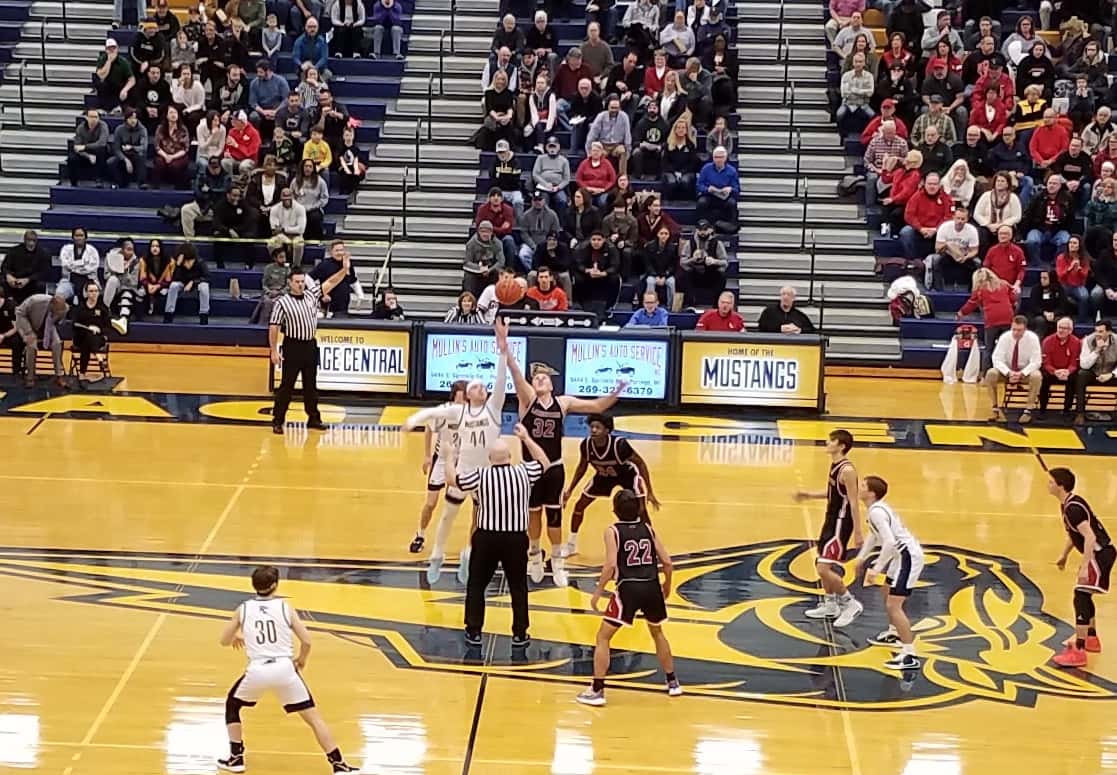 Portage Central 41, Lakeshore 35
Portage Central takes sole possession of first place in the SMAC West Division with the win. The game was close throughout with the largest lead of the night being seven points. Hunter Young led Central with a game high 15 points, JJ Bushu and Ben Brower each scored 11 for the Lancers. The Mustangs improve to 10-0 on the season and 5-0 in the West Division while Lakeshore falls to 10-1 on the season and 4-1 in the division.

Portage Northern 43, St. Joe 35
The fourth quarter was the difference maker as the Huskies outscored the Bears 15-6 down the stretch to pulled out the SMAC West Division win. Kareem Williams led Northern with a game high 11 points. Jeremiah Sterling and Griffin Shinrock each scored six in the loss for St. Joe.

Mattawan 37, Niles 35
In a low scoring game where both teams struggled to find points, Mattawan found a way to pull out the SMAC West Division win. Cerious Wilson scored 13 points in the loss for Niles, Mari Nichols added 11.

New Buffalo 67, Countryside Academy 49
A strong start propelled the Bison to the BCS win. New Buffalo ran out to an eight point lead after the first quarter and increased it to 13 at the half. Kaden Parmley poured in a game high 27 points for the Bison with Ryan Vinson adding 13 and Markvell Shaw 11. Jamere Matlock scored nine points in the loss for Countryside.

Centreville 66, Hartford 62
The Indians came up just short in this hard fought Southwest 10 battle. Elijah Rodarte scored 19 points in the loss for Hartford. The Indians also got 18 points from Aaron Sinclair and 13 from Kaden Johnson.

Lawrence 56, Covert 13
The Tigers got 12 points from Bol Bak in picking up the BCS win.

Saugatuck 67, Gobles 56
Saugatuck managed to hang on to pull out the Southwest 10 win over shorthanded Gobles. The Tigers were without Karsen Tackett (illness) and Mike Fifer (injury). Jake Getman poured in 21 points in the loss for Gobles.

Portage Central 57, Lakeshore 27
The Mustangs started the game on an 8-0 run and never looked back. Central took a 16 point lead into the half on their way to improving to 10-2 on the season and 5-1 in the SMAC West Division. Abby Long led the Mustangs with 12 points. Jayden Schmaltz and Dominique Cela each scored six for Lakeshore.

St. Joe 52, Portage Northern 15
The Lady Bears set the tone early as they pulled away for the SMAC West Division win. St. Joe ran out to a 20-3 lead at the half on their way to improving to 9-5 on the season and 6-0 in the division. Sophomore Karly Klaer led the Bears with 13 points and five 5 rebounds. St. Joe also got 12 points from Cailynn Junk and 11 from Alex Malone.

Brandywine 56, Berrien Springs 20
The Bobcats took control early in picking up the BCS win over the Shamrocks. Brandywine led by nine after the first quarter and increased the advantage to 24 at the half. Hillary Dortch scored seven points in the loss for Berrien Springs.

Niles 58, Mattawan 43
The Vikings jumped out to a 21-8 lead after the first quarter on their way to the SMAC West Division win. Alycia Patterson poured in a game high 30 for Niles and moves into third place on the Vikings’ all-time scoring list.

Centreville 50, Hartford 38
The Indians didn’t have enough as they fell to the Bulldogs in this Southwest 10 match-up. Jaeylyn Galvan scored nine points in the loss for Hartford.

Decatur 42, White Pigeon 35
The Raiders got 21 points from Regan Rose and 10 from Dani Confer in picking up the Southwest 10 win. Decatur, with the win, improves to 10-3 on the season and 7-3 in the conference.